3 Monks Charged With Smuggling Tiger Skins Out of Buddhist Temple

National Parks and Wildlife officers examine the skin of a tiger at the "Tiger Temple," in Saiyok district in Kanchanaburi province, west of Bangkok, Thailand, June 2, 2016.
AP
By Denver Nicks

Two temple devotees and three monks were charged Thursday after being busted for allegedly trying to smuggle tiger skins and other tiger parts out of a facility in Thailand known popularly as Tiger Temple.

A destination for tourists seeking selfies with the big cats, the Buddhist temple near Bangkok has been under fire for years but come under increasing scrutiny in recent months over allegations of animal abuse. Earlier this week, officials began moving tigers from the facility, officially called Wat Pha Luang Ta Bua, to a wildlife sanctuary. On Wednesday the carcasses of 40 tiger cubs were found in a freezer at the monastery, which denies wrongdoing.

Authorities say they stopped a truck on its way out of the sanctuary carrying tiger skins and charms made of tiger parts, as well as 20 glass jars containing tiger organs and tiger cubs, NBC News reports, raising suspicions that the temple was using tigers to make folk remedies used in traditional Chinese medicine, a big business that has pushed tigers to near extinction.

In the wake of Thursday’s discovery, a post on the temple’s Facebook page says officials are shocked to find animal part smuggling going on. “The recent discovery of the tiger skins and necklaces comes as a shock to us as well as the rest of the world,” the post reads. “We are disgusted at this discovery and we don’t condone this. We are looking forward to the authorities bringing the culprits to justice.” 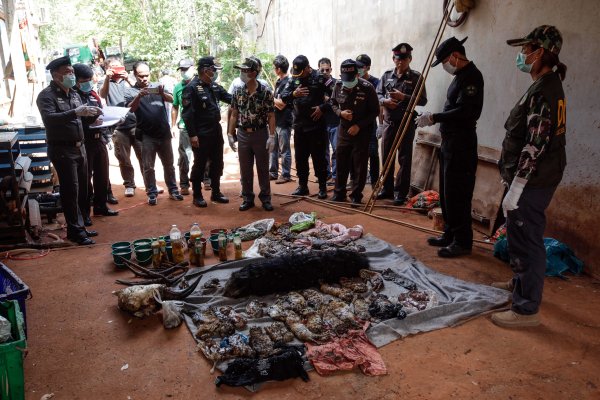