Emma Cline’s 'The Girls' Is an Unsubtle Societal Critique

Emma Cline’s debut novel, The Girls, depicts the adolescent longings and frustrations of Evie Boyd, a 14-year-old who gets sucked into a Manson-family-like cult in 1969 California. Led by a charming but talentless middle-aged hippie named Russell, the cult consists largely of women desperate for love who find comfort not only in Russell’s arms but also in those of their sisters. “To be part of this amorphous group [meant] believing love could come from any direction. So you wouldn’t be disappointed if not enough came from the direction you hoped,” Evie observes.

When the cult’s practices take a gruesome turn, it’s enthralling to trace the transformation of seemingly independent women to lemmings. Cline, 27, has said she wrote the book in a sort of fever dream over the course of three months while burrowed away in a converted garden shed in Brooklyn. And it reads that way in the best sense, as one singular flowing thought told from the perspective of a now middle-aged Evie.

While the cult’s nefarious acts keep pages flipping, Cline’s attention is trained on the women who are conditioned to want nothing but to please men. It’s a perceptive societal critique, but one Cline makes rather unsubtly. Instead of showing how Evie accedes to magazines that instruct on the perfect makeup application needed to catch a man and radio ballads that turn women into objects of lust, Cline uses Evie to simply state her thesis: “I wondered later if this was why there were so many more women than men at the ranch. All that time I had spent readying myself, the articles that taught me life was really just a waiting room until somebody noticed you—the boys had spent that time becoming themselves.”

Evie’s sentiments are familiar: Judy Blume’s hormonal heroines also yearn for adult bodies, adult experiences and the attentions of adult men, thanks to pop culture. But unlike Blume’s girls, who tend to be buoyed by a best friend or a sympathetic relative, Evie finds herself alone. Her parents have divorced and become preoccupied with their new mates. Her crush, who happens to be her best friend’s older brother, has run away from home. Her best friend has iced her out because of the aforementioned crush. Without the bulwark of family and friends that populate happier coming-of-age tales, Evie is exposed. In waltzes Suzanne, a mysterious, raven-haired cult member with whom Evie immediately becomes obsessed. Their romance is the most delightful part of the narrative.

Indeed, Suzanne outshines the one-dimensional Russell, which makes it all the more confusing when she submits to his mad ravings. Cline creates a world of binaries: women are susceptible to the manipulation of men, and men are ever on the brink of violence. The dynamic is set in motion when Russell first meets Evie and calls her “Eve, the first woman.” We wait for Russell, the snake, to offer an apple. Evie has similar interactions with other men. She later remarks, “I should have known that when men warn you to be careful, often they are warning you of the dark movie playing across their own brains.” It’s a reductive gender dynamic. But it’s easy to forgive the first-time novelist who otherwise does a compelling job of tapping into the psyche of women pushed to the edge.

Calamity arrives when these put-upon women release their pent-up rage, though they aim it in the wrong direction. The impulse, if not the actions, will ring true for every woman who has at some point buried her fury when a man has condescended to her or asserted his dominance. Cline would have us believe that only chance decides whose emotions will boil over and whose will merely simmer. 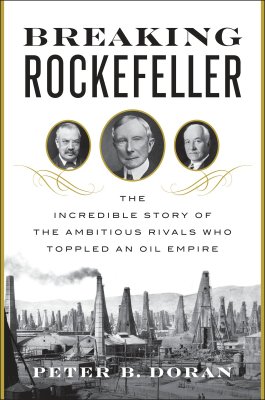 How One Man Came to Own the Skies and Make Aviation History
Next Up: Editor's Pick