On Politically Correct Language: Don't Knock It 'Til You Try It

My daughter came home from a semester at a small liberal-arts college with a new vocabulary—the kind that pundits like to mock these days. Words like microaggression, intersectionality, trigger warning, nonbinary and cisgender migrated from her campus right into my living room. Now if I phrase something in some outdated way, misassign a she or a he, I get groans of indignation or looks of pity. Sometimes it feels like navigating a field of verbal IEDs: one false step and you’ve inadvertently invalidated a segment of the population you hadn’t even considered before.

It’s easy to view this word policing as a superficial indulgence of kids with not enough to worry about. But if I’ve learned anything from child rearing, it’s that things you made fun of yesterday will feel normal, and perhaps even essential, tomorrow. Like gluten-free cupcakes, Chuck E. Cheese’s birthday parties, stroller cup holders and yoga for 6-year-olds (or yoga in general). The truth is, you will become your own most dreaded cliché eventually, so it’s best not to fight it.

You could say this school year has been an education for me too. What seemed like over-the-top political correctness from the young ones at Thanksgiving doesn’t feel as awkward lately. As the debate over bathroom rights spreads, so does this new vocabulary. And I’ve learned as much from the language my kid has given up as I have from what she’s adopted. When she told me that her co-op dorm had proposed a ban on any comments regarding bodies and appearance—even something nice—I almost laughed. “So wait, you can’t say, ‘Hey, you look great,’ to someone?” I asked. Nope, said daughter: “There’s a risk of it being damaging or hurtful or inviting comparison, even if it’s complimentary.”

My first thought was that by banning all appearance talk from conversation, these girls would also eradicate a fundamental building block of female relationships. It is, after all, a ritual for women of some generations to greet each other with a flurry of compliments that are immediately countered with corresponding self-deprecating jokes. It’s like a mutual-disarmament pact where you offer up a vulnerability and the other person reciprocates. It conveys humility, defuses nascent competition and can make you feel as if you have something in common with a woman you’ve just met. You’re symbolically baring your tender underbelly and sometimes actually baring it to convey solidarity.

But all that self-deprecation can veer into the absurd. Amy Schumer blasted this very bad habit in a recent skit. A group of young women are meeting up on a street corner. They greet each new arrival with a compliment, and everyone responds with an outrageous denial. “I’m like a size 100 now,” says one in response to admiring comments about her dress. “I paid like $2 for it. It’s probably made of old Burger King crowns.” When the very last woman arrives and someone says something nice to her about what she’s wearing, she just says, “Thanks.” Every other woman explodes (literally) in shock. Even with body positivity becoming a veritable movement, it seems as if we still haven’t learned to take a compliment.

Sure, my kid makes a valid argument when she says that talking about looks at all, positively or not, helps feed the sexism that is nowhere near abating. Even the new rallying cry of “I’m beautiful the way I am” still calls attention to how we look, still using “beautiful” as the goal. Nor has all that feel-good talk changed most of the culture. For every plus-size model on the cover of a magazine, there’s a dating app where you swipe left on the basis of only a photo or there’s another “perfect” Kardashian seminude selfie labeled as empowering.

Even so, I think that banishing all body talk or insisting that it be nothing but positive risks shutting down an important conversation about the often startling and bewildering and profound changes the female body goes through from puberty to pregnancy to menopause. Experiencing all that alone, without any commiseration, would be a drag.

I still haven’t quite been able to convince my daughter of this. She admonishes me when I howl about some new indignity of aging. She thinks I should embrace the whole process, let my hair go gray and stop whining about the whole spare-tire thing. Don’t give in to patriarchal standards! She’s right, of course. I should set a more enlightened example. I’ll try to do better, get with the new program. But I’m also looking forward to when she’s my age, because there’s nothing like experience to muck up your ideals. 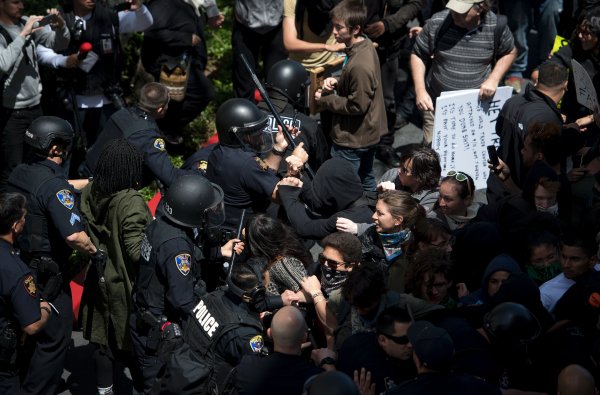 America's Anger Is Out of Control
Next Up: Editor's Pick