President Obama: GOP Economic Agenda 'Not Designed to Help You'

President Obama sought to “myth-bust” a number of Republican arguments about the economy in a fiery speech in Elkhart, Ind., a town whose recovery his Administration says is representative of the nation’s.

The President spent much of his speech before a crowd of a little over 2,000 at Concord Community High School blasting the economic policies of Republicans in Congress and on the campaign trail. The Republican economic agenda, he told the crowd, “it’s not designed to help you.”

“If the economy is really what’s driving this election, then it’s going to be voters like you that have to decide” what path the country will take, the President said Wednesday. Given polling data, voters in Elkhart aren’t likely customers for what the President was selling. Elkhart County polling data shows the area skews heavily Republican — GOP candidates earned more than 33,000 votes in the recent primary, while Democratic candidates garnered a little over 11,000. But Obama said Wednesday the political leanings of the town, paired with the fact that it was the first place he visited as President in 2009, are what drew him to the area. “I know I don’t poll all that well in this county,” Obama said. “I’m not here looking for votes. I am here because I care deeply as a citizen.”

The speech the President delivered on Wednesday could easily be considered a campaign speech and is likely a preview of how the President will address audiences on the stump in upcoming months. At every turn, Obama presented an argument that the policies he’s championed as President — and policies of Democrats in general — are more beneficial to everyday Americans than those promoted by the GOP. But the President’s remarks were not billed as such — the White House presented the President’s speech as an opportunity for Obama to lay out the choice Americans will face when they hit the polls in November — a choice he contends could have a dire impact on their economic futures.

Obama spent most of the hour ticking off the ways he says Republicans twist facts about the economy, the impact of trade deals, immigration reform, and the benefits of unions to curry favor among voters through a dramatized retelling of arguments made by pundits on conservative talk-radio shows and cable networks. The President argued that the deficit had shrunk under himself and former President Bill Clinton and said that his Administration has spent less on domestic priorities than his predecessor Ronald Reagan. He touted the benefits of the Affordable Care Act and said arguments that immigrants and minorities were the reason for stagnated wages were untrue. Obama also called on politicians to “stop pitting working Americans against each other.”

And though the President has yet to jump behind a particular candidate on the Democratic side, he used the speech as an opportunity to take direct aim at policies of the presumptive Republican nominee for President, though President Obama did not call Donald Trump by name. It was arguably one of the President’s most forceful speeches against the business mogul whose appeal he seemed visibly baffled by, particularly Trump’s plans to roll back Wall Street reforms. “How it is that somebody could propose that we weaken regulations on Wall Street?” Obama asked. “Have we really forgotten what happened on Wall Street eight years ago?”

“When I hear working families think about voting for [the GOP’s] economic plans, I want to have an intervention,” the President said. “Sometimes I just don’t get it.” The President also said the U.S. can’t “build walls” around the U.S. economy or “deport 11 million people,” alluding to policies promoted by Trump.

Reports from Elkhart show that beyond economics, which have dramatically approved in the area — the unemployment rate has dropped from nearly 19% to around 4% — the town’s conservative values have contributed to a division among residents about the Obama presidency and his impact on the economy there. On Wednesday, the President said that he’s O.K. with voters not agreeing with him based on social or moral values but said, “if we get cynical and just vote our fears, or if we don’t vote at all, we won’t build on the progress that we started … Whatever our differences, we all love this country.” 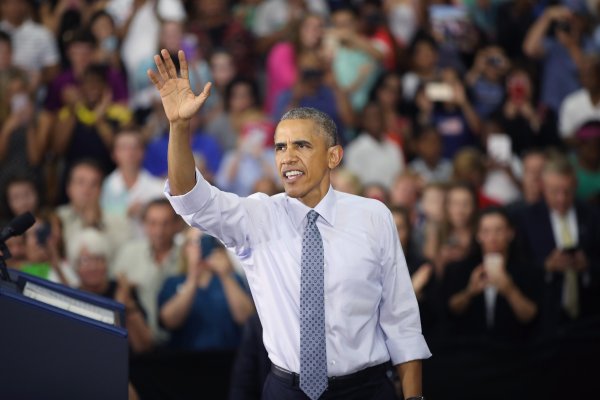 President Obama on Donald Trump: America Is Already Great
Next Up: Editor's Pick