The news that a French Navy vessel has probably found the black boxes from EgyptAir Flight 804 brought huge relief Wednesday to Egyptian and French officials, who have led a frantic search for devices seen as crucial in determining whether a terrorist attack brought down the plane on its way from Paris to Cairo last month.

But leaving aside that relief, the two-week hunt for the flight-data and voice recorders has prompted another reaction: renewed calls to update the way airplanes gather and transmit information, and move past an aging black-box system that was introduced in the 1960s—decades before real-time data streaming became a ubiquitous part of life.

Despite the costly and complicated effort involved in recovering black boxes, the debate over how to upgrade or replace the recording devices has dragged on for years. Governments, airlines and pilots have all resisted changes. Airlines argue it would cost too much, and pilots say it could be an invasion of their privacy. Since airplanes criss-cross the planet, aviation officials from around the world all need to agree on new technology. That “is obviously a very complex process,” said Anthony Philbin, a spokesman for the International Civil Aviation Organization (ICAO), the United Nations agency that sets global aviation regulations. Philbin said that since “191 governments make decisions through ICAO, and our agency’s role is to support them in achieving consensus,” getting there can be a very lengthy process.

Even so, experts believe changes are years or even decades overdue, and that recent plane crashes have made that painfully clear. For one thing, the hunt for black boxes is a race against time, since batteries on the devices last only 30 days. After that, the flight-data and voice recorders (which are in fact orange, not black) fall silent, making any efforts to find them hugely difficult, especially when planes fall to the bottom of the ocean, as is the case with Egyptair Flight 804.

French officials, whose specialized deepwater vessels are key to the EgyptAir search, already have bitter experience with the limitations of black boxes. In 2011, after a 23-month hunt that cost millions, French ships finally uncovered the black boxes of Air France Flight 447, which plunged into the Atlantic Ocean en route from Rio de Janeiro to Paris on June 1, 2009, killing all 228 people on board. And despite an international hunt, the black boxes are still missing from Malaysia Airlines Flight 370, which vanished en route from Kuala Lumpur to Beijing in March of 2014, leaving its disappearance and the deaths of the 239 people on board one of aviation’s most confounding mysteries.

In an era when everything from share prices to weather forecasts are transmitted in real time, such mysteries are unnecessary, aviation experts said. Indeed, the 2009 Air France crash pushed governments to suggest several changes. Those included designing data-recorders that eject automatically if the plane crashes and can float on the ocean surface, easily detectable from the air. Another fix was to transmit data from the locator beacons—the pings heard this week by the French vessel—at lower frequencies, allowing ships to detect the sound from further away.

Aviation experts and governments have also argued since 2009 to lengthen the battery life on black boxes. “The battery situation is pretty scandalous,” Jean-Paul Troadec, who led investigation into the Air France disaster as head of France’s BEA air accident investigation authority, told Reuters last week. “It hardly costs anything to install new batteries.”

The European Aviation Safety Agency (EASA) has issued new regulations requiring black box batteries to last 90 days. Yet that rule will come into effect only in 2019, and will affect thousands of planes that operate mainly in Europe. An EASA official, speaking on condition of anonymity, told TIME this week that the organization had delayed enforcement for 30 months, because it affects “thousands of airplanes and helicopters,” giving time for “equipment suppliers to prepare for the significant increase in demand.”

In March, the U.N. agency ICAO issued new regulations that will slowly roll out between now and 2021. Those will require airplanes to transmit their location once a minute “in distress circumstances,” and to extend the voice recordings from the cockpit to 25 hours “so that they cover all phases of flight for all types of operations.” The black boxes currently record only the last two hours of the flight—making it hard to determine whether a crisis occurred earlier in the journey.

None of that will help investigators determine what doomed EgyptAir Flight 804. 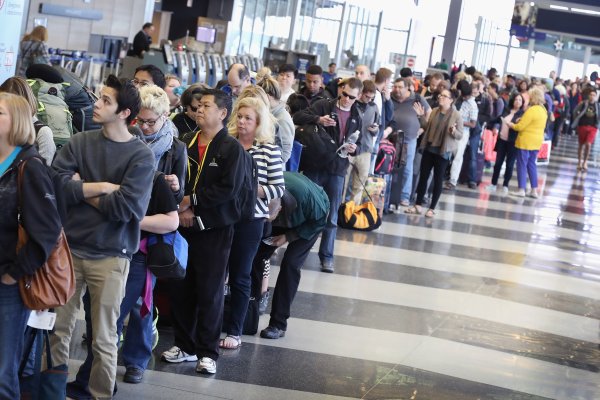 Airline: 70K Missed Flights Due to Security Lines
Next Up: Editor's Pick