Forty dead tiger cubs were found in the freezer at a Buddhist temple in Thailand two days after officials began work to relocate living tigers from the property.

The temple, officially known as Wat Pha Luang Ta Bua but nicknamed Tiger Temple, is a popular tourist destination where travelers can take photographs with tigers. But ongoing accusations that it was involved in wildlife trafficking and abuse caused officials to begin a raid on the temple on Monday in an effort to evacuate and relocate 137 tigers, the BBC reports. When the dead cubs were discovered, officials said they would be bringing additional charges against the temple.

It’s unclear how the cubs died or why they were in the freezer, but in a post on its Facebook page, the temple explained, “In the past, as per Buddhist customs, [dead] tiger cubs were cremated. In 2010, the ex-vet of Tiger Temple changed this policy. Instead of cremation, the deceased cubs were preserved in jars or kept frozen.” The temple says cubs often die of natural causes, and denied selling cubs and other wrongdoing.

An official from Thailand’s Department of National Parks speculated to Reuters that “They must be of some value for the temple to keep them … But for what is beyond me.” 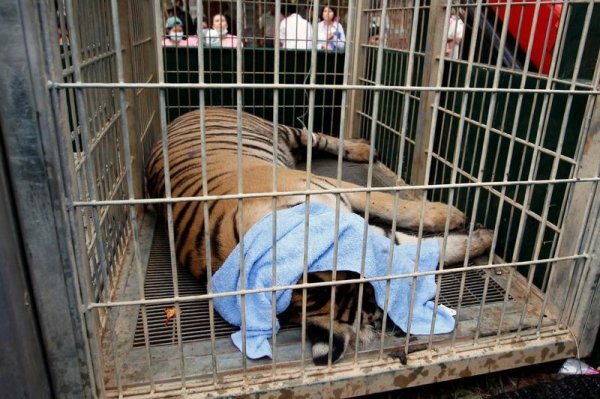 Tigers Seized from Buddhist Temple After Abuse Allegations
Next Up: Editor's Pick