A fisherman siting on a boat mending his fishing gears in the sea town of Tanmen, in China's southern Hainan province, on Jan. 21, 2013
Wang Zhao—AFP/Getty Images
By Hannah Beech / Tanmen

From his living room in the Chinese fishing port of Tanmen, Pu Xidong offers up a giant-clam shell for $1,200 — a great deal, he says, for a bivalve that can live up to 100 years. Or how about a bloom of endangered red coral for a little less cash? The fisherman from China’s southernmost island province of Hainan extracted both from the distant — and contested — reaches of the South China Sea. Armed with thousands of dollars in government subsidies and a free satellite-navigation system that would cost tens of thousands of dollars on the open market, Pu regularly ventures out to the Spratly Islands, a sprinkling of isles and reefs that are claimed by various regional governments. “I feel more safe now,” he says, of the Chinese government’s assistance to his fishing expeditions. “Fishing is dangerous work.”

The high-stakes game of geopolitics being played out in the South China Sea is plain to see. Six governments claim overlapping parts of the 3.5 million-sq-km sea, and its waters have emerged as a potential flashpoint not only between the various claimants but also between a rising China and the world’s established superpower, the U.S. The environmental impact of this maritime conflict, though, is equally damaging — and already far more visible. China’s appetite for endangered giant clam shells, which are carved like elephant ivory for interior decor and jewelry, has denuded swaths of the South China Sea as boats scrape reefs to expose the massive mollusks. Meanwhile, the Chinese government’s support for local fishermen has made venturing into contested areas more economically attractive, exacerbating the overfishing that already plagues the waterway.

Most ecologically harmful is China’s construction of artificial islands in the South China Sea, which depends on dredgers to churn up coral reef and smother them with sand and gravel to create land. Since 2014, China has transformed seven mostly underwater reefs into artificial islands, including ones with runways long enough to welcome military jets. “The worst issue with the island-building is that the effect is permanent,” says John McManus, a professor of marine biology and ecology at the University of Miami. “Once a portion of coral reef has been buried under tons of sand and gravel, it cannot ever recover. Imagine telling this to our grandchildren.”

The South China Sea is one of the world’s most biologically diverse marine environments, boasting around 500 species of reef-building coral, compared with around 70 in the Caribbean, according to McManus. In addition to its role as a conduit for more than $5 trillion in maritime trade, the sea’s waters also teem with at least one-tenth of the world’s fish stock — an ever more valuable resource as global hunger for seafood increases. (Fishing was worth $130 billion last year, according to the U.N. Food and Agriculture Organization.) While the South China Sea’s underwater oil and natural-gas deposits are most commonly listed among the waterway’s riches, no one knows how deep these reserves are nor how easily accessible they may be. By contrast, the sea’s biological treasures are proven. And there may be much more. It’s likely that hundreds of thousands of species are still undiscovered in the reefs of the South China Sea. Scientists wonder whether one of these mystery species could one day transform medicine, just like aspirin, a life-changing drug that was originally derived from plants.

Just like fishermen from other littoral nations, Tanmen residents speak of their ancestors having profited from the South China Sea for generations. But the mass reaping of giant clams is a recent phenomenon, catalyzed in part by a crackdown on the illegal elephant ivory trade, according locals. In fact, the harvesting of wild giant clams and coral contravenes international conservation conventions too. But it’s much easier to sign on to a save-the-elephants campaign than advocate for a faceless bivalve.

Despite a supposed ban on Tridacna gigas (giant clam) harvesting that Chinese officials began promoting more vocally last year, dozens of stores still line Tanmen streets, openly selling intricately carved giant-clam shells. Many fishermen sell uncarved shells, which can measure 1 m long and weigh 200 kg, out of their homes, while other Tanmen locals work in shell-carving factories that range from industrial size to backyard enterprises. “I don’t like to go out to sea,” says Pu’s adult son, who declined to give his name. “It’s easier work in the factory.”

Marine biologist McManus, who took a research trip to the Spratlys earlier this year, estimates that the preferred Chinese method for collecting giant clams — dragging small boat propellers across a reef to break up the coral bed and uncover the mollusks — has already caused severe damage to more than 100 sq km in 40 coral reefs in the South China Sea. He says that at least another 20 shallow reefs are in imminent danger from the resulting huge plumes of sand and silt, which kill nearly all animal life in nearby waters.

The destruction caused by industrial-scale giant-clam harvesting could explain a contradiction that had been troubling marine biologists who study the South China Sea. Chinese officials and scientists have repeatedly described Beijing’s South China Sea building boom as environmentally friendly. In early May, for instance, China’s Foreign Ministry spokesman Hong Lei said that China’s island-building efforts in the Spratlys “strictly follow the principle of conducting green project and building ecological islands and reefs … The impact on the ecological system of coral reefs is limited.” Hong went on to say that “once China’s construction activities are completed, ecological environmental protection on relevant islands and reefs will be notably enhanced and such action stands the test of time.”

How can this be? McManus believes he knows the answer: the affected reefs were already scarred by giant-clam harvesting so Chinese island builders cannot be blamed for the initial destruction. In fact, biologists say that while the reefs could have slowly recovered from the clam-harvesting degradation, Beijing’s island-building campaign means permanent ecocide. Any coral-propagation effort will likely only replace a fraction of the destroyed reefs. “If one adds up all the replanting done successfully to date around the world,” says McManus, “the area replanted sums up to a single square kilometer.”

In 2013, soon after he took on the title of China’s President, Xi Jinping visited Tanmen and urged residents to take to the seas as a way of showing their national spirit. Local fishing militias had already been on the forefront of a campaign to take over the disputed Scarborough Shoal for China. (China claims nearly the entire South China Sea for itself, through a U-shaped, nine-dash line printed on its maps.) But Xi wanted patriotic fishermen to do more, including ferrying construction materials for the island-building efforts. Tanmen locals have since complied. They also have ventured to the furthest fringes of the South China Sea, which China’s Foreign Ministry has deemed the nation’s “traditional fishing grounds,” even though these waters lap up against the coasts of Southeast Asian nations.

Fishing is a backbreaking occupation that requires leaving home for weeks or months at a time. Still, Chinese government subsidies for those plying the South China Sea, for everything from petrol and steel reinforcement for boats to an annual $4,600 in “danger pay,” make it far easier to earn a living. It helps as well that Hainan fishermen can press an emergency button on a free satellite-navigation system to summon the Chinese coast guard should foreign maritime forces intervene. Over the past couple years tens of thousands of Chinese boats have been outfitted with the domestically made BeiDou satellite system that allows for such distress calls.

In March, after an Indonesian patrol boat apprehended a Chinese trawler that Jakarta said was illegally fishing in its waters, a Chinese coast-guard vessel muscled in to free the Chinese fishing boat from the towline connected to the Indonesian ship. Last week, Indonesian authorities again seized a Chinese fishing boat off the Natuna Islands, which are undisputed Indonesian territory, even firing shots at the offending vessel. For its part, Chinese coast-guard boats have directed water cannon sprays at foreign fishermen who China says are intruding on their territorial waters.

He Zikun owns a fleet of fishing boats in Tanmen, and he was an investor in one brightly painted wooden vessel that President Xi boarded on his 2013 visit. The local entrepreneur also runs a shop selling carved giant-clam shells and is expanding into fish farming in the Spratlys. The Chinese government’s bankrolling of the local fishing industry pleases him, especially if it means defending what he says is China’s territory from time immemorial.

A few years back, one of He’s boat crews was briefly detained by Philippine maritime forces near the contested Scarborough Shoal, which the Chinese call Huangyan. The reef, which is less than 370 km from the Philippine capital, Manila, was seized by the Chinese in 2012; earlier this year, Chinese military commentators went online to predict that dredgers will soon turn Scarborough into another artificial island. “If such an incident happened today in Huangyan, the Chinese government could have immediately helped my workers,” He says, referring to the BeiDou satellite system that has been gifted to Tanmen boats. “I feel much more secure about our national defense now.”

— With reporting by Yang Siqi / Tanmen 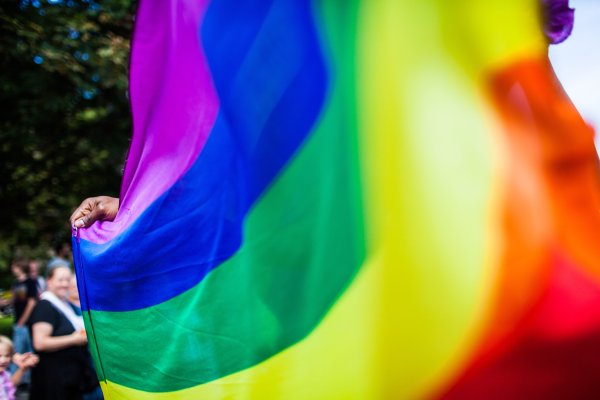 Being Transgender No Longer a Mental Illnesses in Denmark
Next Up: Editor's Pick