The 5 Most Likely Third-Party Scenarios in 2016

But as in most election years, the prospects for such a candidate are mostly a fantasy when it comes to winning the White House outright. A mix of structural challenges such as ballot access in states and rigorous requirements to enter the general election debates, the Electoral College, and the lack of a clear ideological opening make this talk little more than a protest.

Still, that doesn’t mean a third-party candidate can’t play a role as a spoiler, swiping votes that might otherwise go to Hillary Clinton or Donald Trump.

Here’s a look at five potential third-party scenarios and how they might affect the November election. Of course, some or all of these can coexist, causing compounding effects that can’t yet be determined.

The Neocon: The Weekly Standard’s Bill Kristol, one of the leading conservative advocates for an alternative to Donald Trump and Hillary Clinton, has reportedly settled on conservative writer David French as his latest hope. Kristol has been speaking openly about his desire for a third-party candidate for months, suggesting the likes of Mitt Romney, Nebraska Sen. Ben Sasse, or Arkansas Sen. Tom Cotton, who have all declined. More importantly, Kristol has suggested that this alternative candidate has a path to 270 electoral votes. French, a Bronz-star awardee, lawyer, and writer for the conservative National Review, fits Kristol’s ideological mode, but his unknown status—few outside of the professional conservative movement know who he is—makes an outright White House victory far-fetched. Instead, this neo-con alternative would provide a vehicle for foreign policy hawks in the GOP who are dissatisfied with Trump’s isolationist tendencies but also can’t see themselves voting for Clinton. Frustrated Democrats would find little appeal from such a candidate.

U.S. Libertarian Party presidential candidate Gary Johnson walks in Lafayette Park across from the White House in Washington, D.C., on May 9, 2016.
AFP/Getty Images

The Libertarian: The Libertarian Party selected a ticket of former New Mexico Gov. Gary Johnson and former Massachusetts Gov. Bill Weld this weekend in Orlando. The small- or no-government party—it actually debated whether to oppose all government in its platform—would find favor with some in Trump’s coalition. The ticket could also draw some more isolationist-minded Democrats and marijuana-legalization proponents, but the party’s agenda flies in the face of some of the big-government reforms Bernie Sanders would hope to enact. Johnson received just one percent of the popular vote in 2012 and there is little reason to think he could improve on that by more than a few percentage points.

Who it benefits: Hillary Clinton, by a smaller margin

The Greens: Ralph Nader’s 2000 bid on the Green Party line is the most recent instance where a third-party candidate had an impact on the overall outcome. Nader won 2.7 percent of the popular vote—and 1.6% in Florida. Jill Stein, the party’s 2012 and 2016 nominee has underperformed even that margin. The environmental and pro-peace party could become a home for some of the more frustrated Sanders supporters, but that will be tempered by the Clinton’s campaign promulgating fears about the prospects of a Trump presidency.

Who it benefits: Donald Trump

The one-state wonder: There’s no candidate on the docket yet, but some upset Republicans have floated the notion of running an independent candidate in a single swing state in an effort to block Trump from winning the White House. By its nature, this candidate couldn’t win the White House, but would ensure Trump can’t win either. The obvious prospect would be a state like Ohio, but no obvious candidate exists.

The Evangelical: Ever since Ted Cruz’s exit from the GOP race, many social conservatives have found themselves without a standard-bearer. Upset with the thrice-married Trump, they have floated backing an alternative from within the social conservative movement. Among the names floated are several independently wealthy evangelicals, though nothing firm has emerged. And this candidate would attract a far smaller coalition than a traditional Republican candidate, with all the headwinds preventing inroads into the Democratic base, while siphoning votes from the GOP nominee. 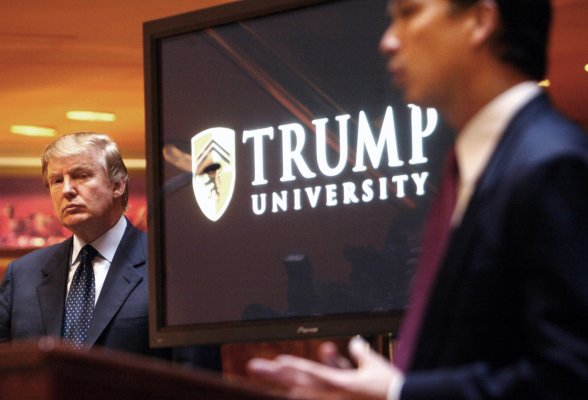 Trump University Targeted Students Who 'Hurt' and Had 'Problems'
Next Up: Editor's Pick