How a Victory Over ISIS in Fallujah Could Actually Hurt Iraq

Iraq could finally turn the corner against ISIS—but at a potentially high risk to the future of the divided country.

The Iraqi military and its allied militias are now engaged in intense fighting on the edges of the city of Fallujah in an effort to reclaim the city from ISIS militants. The offensive is a critical test for Iraq’s disparate armed forces in the broader war against ISIS, which overran a large portion of the country in mid-2014. Backed by U.S.-led airpower, the Iraqi military and the Shiite-majority militias known as Popular Mobilization Units face stiff resistance from ISIS forces in Fallujah. The insurgents launched counterattack on Tuesday that included a reported six car bombs, a tactic ISIS fighters have used across Iraq as they come under pressure from an array of competing forces.

As the fighting unfolds, an estimated 50,000 civilians remain trapped in Fallujah, roughly 40 miles (64 km) west of Baghdad. The civilians’ presence creates another challenge for the pro-government forces as they bear down on the city. As ISIS loses territory in both Iraq and Syria, analysts say the militants may be shifting tactics to increase the human costs of any military victory by the forces that oppose the terror group.

“That’s what I think is scary,” says Paul Salem, the vice president for policy and research at the Middle East Institute in Washington. “They’re sort of pivoting to a strategy of making the humanitarian costs as high as possible as their revenge. I don’t think they expect to win, but if they can take tens of thousands of civilians down with them, that’ll make people pause when you think about Mosul and other places.”

Mosul, in northern Iraq, is the largest city still under ISIS control and remains the most important strategic prize in the overall war against the group. The Iraqi government announced an operation to reclaim the city in March, but the campaign has proceeded at a grinding pace, with the military claiming small villages south of the city one by one. Mosul, located far to the north, is viewed as less of an urgent threat in Baghdad. Fallujah, on the other hand, looms large in the consciousness of Baghdad’s populace, who fear the existence of a jihadist stronghold just an hour’s drive from the capital.

Pro-government Iraqi forces cut the supply lines into Fallujah in February, placing the city under siege and forcing thousands of trapped Iraqi civilians to go hungry. Now, as the battle for the city is underway, some of those same civilians are desperately trying to flee. “People are not taking the regular routes out because the regular routes are controlled by fighters or there is a higher risk of being intercepted,” says Diana Eltahawy, an Iraq researcher at Amnesty International. “So people usually leave in the middle of the night, at 2 a.m.”

Should the Iraqi military and the Shiite-majority militias seize the city of Fallujah, they will face the even more difficult task of earning the trust of minority Sunni Muslim Arab Iraqis who have been skeptical of the central government in Baghdad in the years since the U.S. invasion of Iraq in 2003 and the downfall of the regime of Saddam Hussein, himself a Sunni. In the reordering of the Iraqi system that followed, Sunnis lost the position of relative social dominance they enjoyed under Saddam, and subsequent Iraqi governments have continually failed to fully bring Sunnis back into the political process. The resentment felt by large sections of the Sunni public is one of the conditions that enabled ISIS to easily take control in population centers like Fallujah and Mosul in 2014.

Throughout, Fallujah has been a base for rebellion against the authorities in Baghdad, both American and Iraqi. The city was a key redoubt of the insurgency against the U.S. military occupation after 2003. U.S. troops recaptured the city in after a battle that included some of the most intense house-to-house fighting of the entire U.S.-led war in Iraq, with at least 95 U.S. troops killed.

Fallujah was also an epicenter of Sunni-led protests against the Baghdad government starting in 2012. Initially triggered by the arrest of the body guards of Iraq’s Sunni Finance Minister Rafi al-Issawi, the protests gathered strength to address grievances ranging from government corruption to alleged abuses of the controversial “de-Baathification” policy which was intended to dismantle the remnants of Saddam’s regime. Then-Prime Minister Nouri al-Maliki’s failed to resolve the crisis of Sunni participation in Iraq’s institutions, fueling the rise of insurgent groups including ISIS.

The participation of militias known as Popular Mobilization Units has been cause for particular concern in Fallujah. Backed by Iran, the dominant Shiite power in the Middle East, the Shiite-majority militias arose in 2014 in response to the collapse of the Iraqi government military in the face of ISIS’ advance across the country. Iran has dispatched Qassem Soleimani, the leader of an elite unit of Iran’s Revolutionary Guards, to help oversee the battle in Fallujah. A powerful figure in Iranian foreign policy, in recent years Soleimani aided the regime of Bashar al-Assad in its efforts to end the rebellion in Syria and has been a central figure in the Iraqi regime’s battle against ISIS.

Critics worry that that sending the Shia militias into Sunni Fallujah is a recipe for sectarian violence. In one widely-circulated video, Aws al-Khafaji, the head of the Abu Fadhil al-Abbas militia group, denounces Fallujah as a stronghold of terrorism. “There are no patriots, no real religious people in Fallujah. It’s our chance to clear Iraq by eradicating the cancer of Fallujah,” he says in the video.

Despite those attempts, the current campaign to reclaim Fallujah risks repeating some of the errors that plagued both the U.S. occupation and previous Iraqi governments—winning the immediate battle in the short term while alienating ordinary Sunnis over the long term. “This is not wholly a military problem,” says Renad Mansour, an analyst with the Carnegie Middle East Center in Beirut. “What you need is for the people, the 60,000 residents inside the city, to at some point turn against ISIS.” 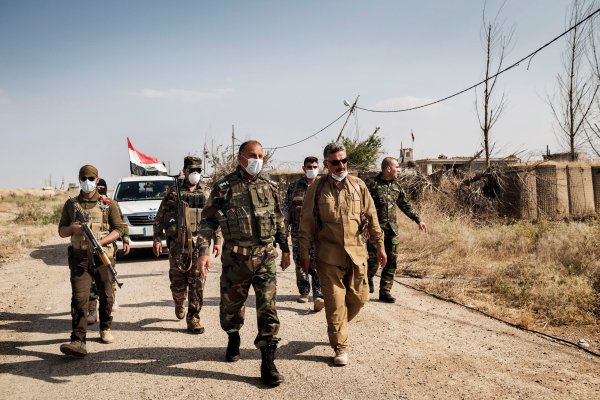 Iraqi Police: ISIS Bombed Us With Chemical Weapons
Next Up: Editor's Pick