The Secret Tax That Targets Families Affected By Death or Disability

The grief and pain of losing of a child is unimaginable. The strength and durability of character of those forced to pick up the pieces in the months and years following such a loss is an inspiration. We believe it’s our responsibility as lawmakers to do everything we can to support families in these situations.

This commitment to making difficult days a little easier is why the federal government forgives student loan debt for families of children who have died or Americans who have become permanently disabled. This same commitment should extend to the tax burden that comes with that loan forgiveness.

The U.S. Department of Education forgives student loans for individuals because of death or total and permanent disability. This is a sensible, compassionate policy. However, these Americans who suffer great personal loss or severe injury are often shocked to learn that through an unfortunate quirk in current law, the Internal Revenue Service (IRS) may require them to pay income tax on the very loans the Department of Education has forgiven. A one-time discharge of loans can result in tens of thousands of dollars in immediate tax liability.

Under current law, the IRS treats the amount of student loans forgiven as income, which must be reported on an individual’s tax return. Borrowers are given the colorfully-named Form 1099C and instructed to report these discharged loans as a type of income, which is subject to tax. Instead of helping families heal, this misguided policy simply replaces one financial burden with another.

The consequences are real. Take the Maine couple who had to pay $24,000 in taxes on forgiven loans after their son died suddenly from a brain aneurysm. Or the permanently disabled Ohio woman who had to scramble to find $14,000 to cover tax on her discharged loans. Or the Delawarean who had more than $30,000 of student loans discharged following a permanent disability, only to learn that he might be subject to a significant tax.

We see examples of this all over the country—sometimes even in our own offices. A member of Senator Coons’ staff and his family experienced this harrowing situation after his older brother passed away in 2009. When his brother died at age 23, six months after graduating from college, his parents were liable for his brother’s student loans.

Reeling from the loss of a child, it took years of miscommunication and negotiations with their loan servicers for his parents to finally have the loans forgiven in 2015. This year, they were surprised to receive a notice stating that the $75,000 in loan forgiveness should be declared as income on their tax return, which could result in tens of thousands of dollars in taxes owed to the IRS.

We believe that stories like these should be, at worst, nothing more than a bad dream—not living nightmares for American families. To end this, we—Republicans, Democrats and Independents from across the U.S.—worked together to introduce a bill in both the House and Senate to fix this problem. Our bipartisan proposal, the Stop Taxing Death and Disability Act, is simple—it eliminates this unfair tax on forgiven loans, because it serves no public policy purpose.

Under current law, student loans belonging to a borrower whose college closes, or for individuals who work in certain public service fields, already have their loans forgiven tax-free. Why should student loans forgiven for death or disability be treated any differently?

Since we introduced this bill, we have been gratified by the groundswell of support it has received. The Stop Taxing Death and Disability Act has been endorsed by more than 25 groups within the disability, education and veterans’ communities, including the American Legion, the Christopher & Dana Reeve Foundation, the National Down Syndrome Congress and Student Veterans for America.

But we need to work faster. The Department of Education has just identified nearly 400,000 Americans with total and permanent disabilities who are eligible for discharge of their federal student loans. However, many of these individuals could face this same surprise tax bill following their loan forgiveness. That’s why it is critical that Congress pass the Stop Taxing Death and Disability Act to help give grieving families closure after their loans are discharged.

Despite our divided political climate, we have a rare opportunity to turn this commonsense, bipartisan bill into law. If you, like us, agree that taxing death and disability is an insensitive and useless policy, join us by spreading the word that time is running out. With the latest Department of Education announcement, thousands more families may face the consequences of this absurd tax. Let’s take action to end this tax and make this misguided policy nothing more than what it should be— a bad dream. 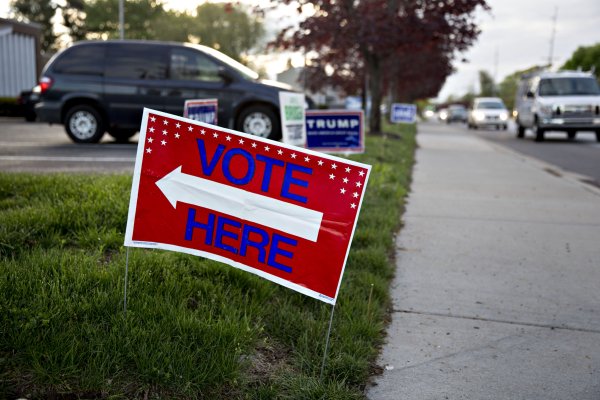 Welcome to the Election From Hell
Next Up: Editor's Pick