Authorities are considering possible criminal charges following an incident at the Cincinnati Zoo over the weekend left a 17-year-old gorilla dead after a boy fell into its enclosure, a prosecutor said Tuesday.

Hamilton County Prosecutor Joseph Deters said in a statement that the Cincinnati Police Department is looking into Saturday’s shooting death of the zoo’s male western lowland gorilla named Harambe, which has sparked national outrage. Harambe was killed to save a three-year-old boy who officials said was being dragged around by the gorilla after the child crawled through a barrier and fell into the gorilla’s exhibit.

“Once their investigation is concluded, they will confer with our office on possible criminal charges,” Deters said.

The zoo’s director, Thane Maynard, said the 420-pound gorilla was shot dead instead of tranquilized because the anesthetic would have taken too long to go into effect and may have “created alarm” in the animal. “The risk was due to the power of that animal,” he said at a news conference Monday.

Meanwhile, an animal rights activist group on Tuesday filed a federal negligence complaint with the U.S. Department of Agriculture against the zoo, Reuters reports. Stop Animal Exploitation Now is seeking the maximum penalty of $10,000.

“The failure of the Cincinnati Zoo to adequately construct this enclosure to protect both the public and the animal held prisoner there is a clear and fatal violation of the Animal Welfare Act,” it said in its complaint letter to the USDA. 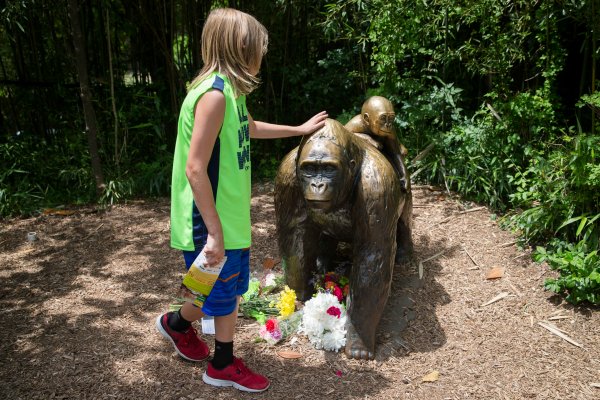