At the seasoned age of 90, Queen Elizabeth II has landed her second Vanity Fair cover — but this time, she’s sharing the honor with her four scene-stealing dogs. Holly and Willow are a part of the Queen’s legendary corgi “dynasty,” while Vulcan and Candy are dorgis, a crossbreed that came about when one of the Queen’s corgis mated with a dachshund that belonged to her sister, Princess Margaret.

The Queen requested that her canine companions be a part of the series of portraits shot for the magazine’s summer issue, which was lensed by iconic fashion photographer Annie Leibovitz.

Leibovitz told the magazine that the Queen was very involved with the creation of the images. “The most moving, important thing about this shoot is that these were all her ideas,” Leibovitz said. “She wanted to be photographed with her grandchildren and great-grandchildren; her husband, Prince Philip, the Duke of Edinburgh; her daughter, Anne, the Princess Royal; and her corgis.”

Queen Elizabeth’s decision to pose with her corgis should come as no surprise; according to Vanity Fair, she’s kept corgis for nearly eight decades, which predates her relationship with her husband, Prince Phillip by nearly a decade. The royal family got their first corgi in 1933 when she was eight; the Queen has always had one since then.

See the Queen and her corgis below. 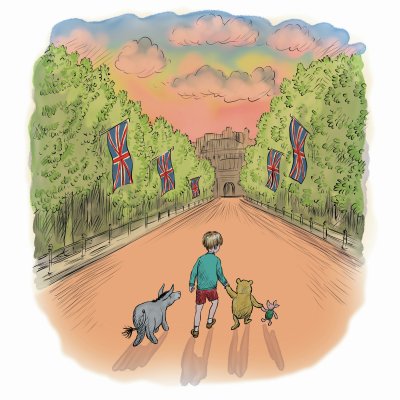 Prince George Gets an Adorable Cameo in New Winnie-the-Pooh Story
Next Up: Editor's Pick