Donald Trump and Hillary Clinton Tangle Over His Veterans Donations

By Tessa Berenson and Philip Elliott

Republican White House nominee Donald Trump stood in his gold-plated skyscraper lobby on Tuesday, defending claims that he raised millions for veterans groups and criticized journalists for trying to verify the claim.

Trump initially said he raised $6 million for veterans groups, but later said that figure is actually $5.6 million, including $1 million from his own pockets. It was yet another example of the New York real estate developer seeming to be caught off-guard for the typical scrutiny that comes with being a presidential candidate.

“I have raised a tremendous amount of money for the vets, almost $6 million,” he said at a news conference Tuesday. “All of the money has been paid out. … I have been thanked by so many veterans groups throughout the United States.” He then read a list of the charities and what amount he donated to each.

Trump blamed the press for being too critical of him for being opaque about the distribution of funds.

“The press should be ashamed of themselves,” Trump said as CNN, Fox News, MSNBC and C-SPAN carried his comments live. “I have never received such bad publicity for doing such a good job.”

“I wanted to do this out of the goodness of my heart,” he continued. “I didn’t want to do this where the press is all involved.”

Trump then singled out ABC News’ Tom Llamas. “You’re a sleaze,” Trump seethed. Llamas later mused on Twitter: “Trump just called me a ‘sleaze.’ Should be an interesting week.”

That vitriol from Trump plays well with the conservative base of the Republican Party, which has deep distrust of mainstream journalists. Trump constantly hammered reporters in his lobby, many of whom have spent hundreds of thousands of dollars of their news organizations’ budget to chase Trump around the country to document his unorthodox campaign. “You need to get your head out of your butt,” New Hampshire state Rep. Al Baldasaro, a Trump ally, shouted at reporters.

Trump has been under fire in recent days for apparently inflating the sum he raised for—and donated to—veterans charities. The money at stake traces back to a fundraiser Trump held in Iowa in January. At the time, he was publicly feuding with Fox News and decided to skip the network’s GOP debate and instead hosted a rival rally to raise money for veterans groups. (“It was the lowest-rated debate, by the way,” Trump jabbed Tuesday.)

Trump said the January event raised $5 million, and that he would pledge an additional $1 million out of his own pocket.

Since then, journalists have been unable to trace all $6 million that was supposedly distributed to veterans groups. Trump campaign manager Corey Lewandowski said earlier this month that the event netted less than the $6 million Trump claimed, because they had not received some large donations that were promised. Trump then said Lewandowski was wrong, and the total came to $5.5 million. Both Trump and Lewandowski have denied in recent days that they ever purported to raise $6 million and last week, four months after the initial event, Trump said he gave away the $1 million he promised. The Washington Post found at least $4.1 million had been donated—a not-insignificant sum, but Trump once again found himself on the defense over needlessly inflated figures.

Trump’s exaggerations—about his charitable giving, his personal wealth, his support in polls—are among the themes Clinton’s campaign has experimented with in recent weeks as top officials continue what one ally quipped was more a creative-writing workshop than a presidential campaign—”try this, try that, try this again.” The “asymmetric political battle” is one that has left the Clinton team auditioning ideas for taking on Trump: that he’s a fraud, that he cheered for the 2008 economic downturn so he could expand his real-estate portfolio on the cheap, that he’s dangerous abroad as well as at home. Yet inside the high command of Clinton’s Brooklyn headquarters, there is a constant review of what is working and, more commonly, what is not.

Trump is a complicated opponent. Here, on Tuesday, Trump took the podium in the lobby of his glitzy Trump Tower to brag about his charitable efforts. Any other candidate would have been left offering a mea culpa for messy accounting. Trump, not so much. “I didn’t have to do this for the vets,” Trump said, ever defiant in the face of facts.

Clinton, meanwhile, picked up the endorsements of California Gov. Jerry Brown, the political arms of the Natural Resources Defense Council and the Congressional Asian Pacific American Caucus. On their own, the endorsements earned a shrug in the face of Trump’s show. Clinton scheduled a 4 p.m. interview on MSNBC between fundraising events in New York and New Jersey.

The Clinton campaign also organized a conference call with Florida veterans to respond to Trump’s event and to criticize his record. The choice of Floridians underscores the Clinton camp’s interest in that perennial swing state, one that is home to Trump’s Mar-a-Lago resort. “Our veterans deserve a President who will honor that service,” said retired Navy Rear Admiral Gene Kendall. The Fernandina Beach, Florida, resident said Trump has used veterans as props for his own political gain. “He has to put up or shut up about his absolutely flagrant use of veterans’ goodwill to tout his personal agenda,” Kendall said.

Trump, for the moment, appears to have achieved an upper hand, especially since the discussion about his charity shifted entirely to his fight with the media. Kendall had little appreciation for that move. “He’s a fraud. … He operates in what’s best for Donald Trump,” Kendall said.

Others were less impressed. “His shoot-from-the-hip approach is dangerous and potentially disastrous for our country, for sure,” said retired Air Force Brigadier General John Douglass, who now spends part of his year in Cocoa Beach, Florida.

Clinton appears to be coasting toward the Democrats’ nomination when voters voice their opinions in North and South Dakota, New Mexico, Montana, New Jersey and, perhaps most dramatically, California. Rival Bernie Sanders, who has vowed not to yield, continues his campaign. Clinton switched up her week to head West, planning to camp out in California for five days. Polls there are close, and Clinton’s team is ready to be done with the Sanders’ distraction, especially as his advisers have insisted a win in California would suggest he has momentum and she does not.

Clinton’s team has bordered on exasperated with the lopsided coverage. Trump last week delivered an energy speech that read like a wishlist from the energy industry. A senior Clinton aide could only shake her head: “The GOP nominee just gave a presser in which he said the wind was killing the eagles, and called a senator Pocahontas. I give up,” deputy communications director Christina Reynolds marveled.

But Clinton’s team has yet to figure out how to fully combat the asymmetrical campaign that they’re entering. As reporters were arriving at Trump Tower, the Clinton campaign distributed a laundry list of Trump’s wrongs against veterans. It started with his $6 million stunt in Des Moines, Iowa. It moved to the effect on veterans of his now-shuttered Trump University and attempts to remove homeless vets and vendors from the neighborhood around Trump Tower because they were besmirching the “world’s finest and most luxurious shopping district” and were turning it “into an outdoor flea market.” The document then noted Trump might privatize the Veterans Administration, had mocked prisoner of war John McCain and maybe opposed the current program to help veterans return home. The Clinton research shop also made swipes at Trump for saying he felt like he served in uniform because he attended a military high school, considered New York’s dating scene his “personal Vietnam” and downplaying risks of military members in the field.

At his press conference Tuesday, Trump said he was confident he would beat Clinton in the general election, and accused her of sending the protesters picketing outside Trump Tower.

“Find out how much Hillary Clinton’s given to the veterans,” Trump said. “Nothing.”

Write to Tessa Berenson at tessa.berenson@time.com and Philip Elliott at philip.elliott@time.com. 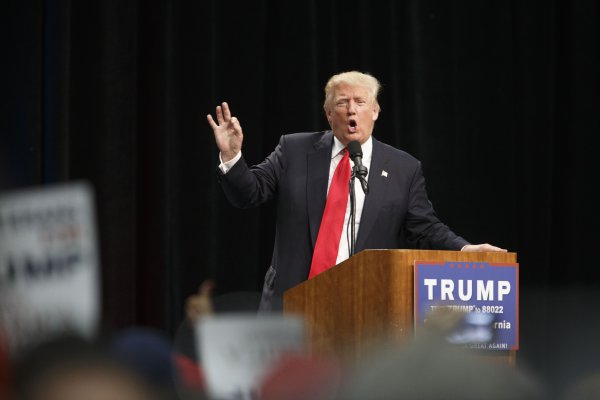