One witness who saw a toddler crawl into the gorilla exhibit at the Cincinnati zoo last weekend says the 400-lb. gorilla was handling the child “like a Raggedy Ann doll in his grip,” and another called the gorilla’s behavior “very violent.”

Zookeepers shot and killed an endangered 17-year old western-lowlands gorilla named Harambe after a three-year old boy crawled into his enclosure. Animal rights activists are outraged, and more than 320,000 people have signed a Change.org petition demanding that the boy’s parents be held responsible for the gorilla’s death. Some are even questioning whether the situation was dangerous enough to warrant killing the gorilla, after video emerged of the animal appearing to protect the boy.

But witnesses at the zoo said the gorilla was overpowering the toddler and threatened the boy’s life. “I was frozen in fear, it was too traumatic to be on camera,” says Kim O’Connor, a witness who filmed the incident. “What you don’t see is the way he pulled the boy up the wall. He was treating the little boy like a Raggedy Ann doll in his grip.”

Another witness, Deidre Lykin, says the encounter was “horrific.” “It wasn’t until the gorilla became agitated because of the nosey, dramatic, helpless crowd; that the gorilla violently ran with the child!” she wrote in a Facebook post. “And it was very violent; although I think the gorilla was still trying to protect, we’re taking a 400 lb gorilla throwing a 40 lb toddler around!”

O’Connor, who spoke to PEOPLE, said she overheard the boy telling his mother he wanted to go play with the gorilla, and the mother told him he couldn’t. “People around me were talking about how big the gorilla was, calling him King Kong, and I heard him say ‘I wanna go!’ and the mom was like, ‘No, you’re not!'” she says. “I don’t think in her wildest imagination she thought he would actually go back and do that.”

She says the boy’s mother, who has been identified in media reports as Michelle Gregg, didn’t realize at first that the child in the enclosure was her son. “All of a sudden, I heard a splash and someone yelled, ‘Oh my God, there’s a kid in there!’ ” O’Connor says. “Kids, men, women, everyone started screaming and then the mother looked around and ran to the wall and said, ‘Oh my God, that’s my son!'”

Lykin says she witnessed the moment when the mother realized her son had crawled into the enclosure. “She said ‘He was right here! I took a pic and his hand was in my back pocket and then gone!'” she wrote. Lykin says her husband was attempting to talk to the boy over the railing, to calm him down. “As she could find him nowhere, she looks to my husband (already over the railing talking to the child) and asks, ‘Sir, is he wearing green shorts?’ My husband reluctantly had to tell her yes, when she then nearly had a break down!”

In a now-deleted Facebook post, the boy’s mother thanked zookeepers for their quick action. “As a society we are quick to judge how a parent could take their eyes off of their child and if anyone knows me I keep a tight watch on my kids,” she wrote, according to PEOPLE. “Accidents happen but I am thankful that the right people were in the right place today.” The boy is reportedly out of the hospital and doing well. 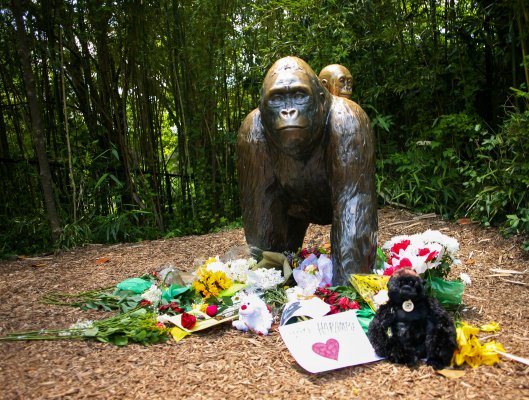 What to Know About the Gorilla Shot at the Cincinnati Zoo
Next Up: Editor's Pick