Did Harambe the Gorilla Have to Die? Here's What You Need to Know

The furor over the fatal shooting of a gorilla at the Cincinnati Zoo over the weekend, after a three-year-old boy fell into its enclosure, continued well into Monday night, with opinion increasingly divided on whether killing the large primate was necessary and justified.

The gorilla was shot by zoo officials Saturday after he dragged the boy around the enclosure. The boy escaped relatively unscathed, with serious but non-life-threatening injuries.

The animal
The 17-year-old male western-lowland gorilla, Harambe, was born at the Gladys Porter Zoo in Texas and moved to Cincinnati two years ago for breeding purposes, his former caretaker Jerry Stones told TIME on Sunday.

Western-lowland gorillas are a critically endangered species, with the World Wildlife Fund (WWF) reporting that their numbers have reduced by 60% over the past 20 to 25 years. Their population in the wild is estimated to be less than 175,000, according to the Cincinnati Zoo, with 765 more reportedly residing in zoos across the globe.

The zoo was hoping Harambe, a 450-lb. silverback or dominant male, would father more gorillas.

The backlash
Animal-rights activists have been up in arms, blaming the parents of the boy for not watching him closely enough as well as the zoo for not having adequate safety measures and shooting the gorilla dead rather than tranquilizing him. Several celebrities also voiced their opinions about the incident on social media.

Dozens gathered at a vigil Monday afternoon to mourn Harambe, although it was made clear that the vigil was not a protest against the zoo. Visitors have also been leaving cards and flowers next to a statue outside the zoo’s Gorilla World exhibit, which has been temporarily closed after the incident.

“Yet again, captivity has taken an animal’s life,” the organization People for the Ethical Treatment of Animals (PETA) said in a statement. “The gorilla enclosure should have been surrounded by a secondary barrier between the humans and the animals to prevent exactly this type of incident.”

The defense
Thane Maynard, the executive director of the Cincinnati Zoo, justified the decision of his emergency response team in a press conference Monday, explaining that the primary concern was for the three-year-old boy’s life.

“When you dart an animal, anesthetic doesn’t work in one second, it works over a period of a few minutes to 10 minutes,” he said. “The risk was due to the power of that animal.”

Animal behaviorists have corroborated Maynard’s argument, with wildlife expert Jack Hanna telling ABC’s Good Morning America that there was “no doubt” in his mind that “that child would not be here today if they hadn’t made that decision … a dart takes too long.”

A woman named Michelle Gregg, purportedly the boy’s mother, published a Facebook post about the incident that has since been deleted.

“As a society we are quick to judge how a parent could take their eyes off of their child and if anyone knows me I keep a tight watch on my kids,” Gregg said in the post. “Accidents happen but I am thankful that the right people were in the right place today.”

Bystanders who witnessed the incident told CNN that the drastic step of killing the gorilla seemed necessary under the circumstances in order to save the toddler.

“From what we saw [the child] could have been killed at any second,” said eyewitness Bruce Davis. “You could look into their [zoo officials’] eyes and tell they had tough decisions to make. It was basically the child or the gorilla, and they chose.”

A statement released by the boy’s family, which did not reveal any of their names, announced he “was doing just fine” after his release from hospital and also expressed gratitude toward the zoo authorities.

“We extend our heartfelt thanks for the quick action by the Cincinnati Zoo staff,” the statement said. “We know that this was a very difficult decision for them, and that they are grieving the loss of their gorilla.” 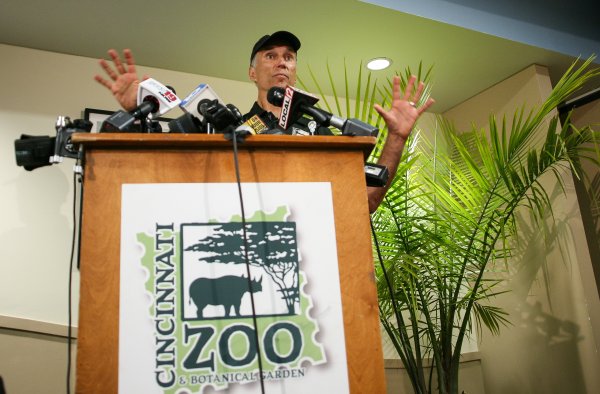 Cincinnati Zoo Director Explains Why Gorilla Was Killed Instead of Tranquilized
Next Up: Editor's Pick