The gates of China’s newest theme park were flung open Saturday — the first salvo in billionaire property magnet Wang Jianlin’s campaign to unseat Disney as the undisputed king of the world’s entertainment industry.

The Wanda Cultural Tourism City, built to a tune of $3.3 billion by Wang’s Dalian Wanda Group, is the first of the firm’s 15 planned theme park and entertainment projects in China — plus five more internationally — slated to open by 2020.

“Tourists can fight 3D monsters in an interactive cinema complex and fly through China’s Jiangxi Province in a flight simulator,” said the firm in a promotional statement.

The launch has been hyped by Wang’s recent robust criticism of Disney, whose new Shanghai theme park is due to open next month. “They shouldn’t have entered China,” Wang, considered China’s richest man worth an estimated $28.7 billion, said of Disney during an interview with CCTV last week.

“The frenzy of Mickey Mouse and Donald Duck and the era of blindly following them have passed,” he added. “[They are] entirely cloning previous IP, cloning previous products, with no more innovation.”

Wang also criticized the higher cost of Disney Shanghai, which reportedly came in at $5.5 billion. It will be Disney’s third park in Asia but its first on the Chinese mainland, following its ventures in Japan and China’s semiautonomous satellite of Hong Kong.

Meanwhile, Wanda’s move to diversify into tourism and showbiz — also acquiring Hollywood’s Legendary Entertainment, producer of the Batman Dark Night trilogy, for $3.5 billion — is spurred by China’s flagging property market. The company has forecast sales will slump 12% in 2016.

Wang, 61, a former People’s Liberation Army soldier, will hope diversification can arrest this slide. According to Wanda, Nanchang Wanda City can accommodate 30,000 tourists with anticipated annual footfall of over 10 million people, creating 20,000 local jobs. However, the firm could not tell TIME how many guests had attended the opening weekend at time of publication.

On Monday, Chinese netizens were unsure whether Wang could unseat American giant Disney.

“I have no doubt of Wanda’s ambition to build 20 Wanda Cultural Tourism Cities in five years,” wrote one user on China’s Twitter-like microblog Weibo. “But to surpass Disneyland, Wanda needs better ideas and culture.”

“Mickey Mouse brings happiness to children from all over the world,” wrote another. “Now Disneyland opens in China, but you [Wanda] brag your moneymaking abilities. It is ridiculous.”

Indeed, Wang’s broadside against Disney belies a more complex Chinese market. DreamWorks Animation also has a $2.4 billion Shanghai theme park due to open next year, while Six Flags Entertainment plans to open its first facility outside the U.S. in China in 2019. Several domestic firms are also making inroads into the market.

China’s theme park wars may turn out more a Royal Rumble than a duel. 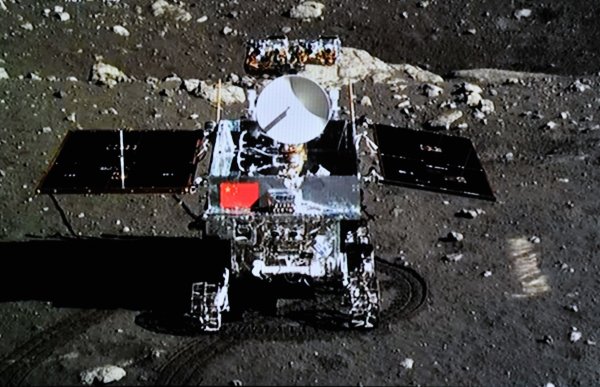 China to Probe the Moon's North and South Poles in 2017
Next Up: Editor's Pick