Presumptive Republican presidential nominee Donald Trump will not debate Democratic candidate Bernie Sanders, he announced Friday, as he decided it would be “inappropriate” to debate the Democratic insurgent, who is far behind Hillary Clinton in their nominating contest.

In a statement, Trump ended nearly 48-hours of speculation that such a debate would take place, after he seemingly accepted an invitation to debate Sanders offered by late night host Jimmy Kimmel. Trump aides quickly said it was a joke, but the candidate followed-up in a Thursday news conference suggesting he might accept if networks donated millions to women’s health charities.

“Based on the fact that the Democratic nominating process is totally rigged and Crooked Hillary Clinton and Deborah Wasserman Schultz will not allow Bernie Sanders to win, and now that I am the presumptive Republican nominee, it seems inappropriate that I would debate the second place finisher,” Trump said in the statement. “Likewise, the networks want to make a killing on these events and are not proving to be too generous to charitable causes, in this case, women’s health issues. Therefore, as much as I want to debate Bernie Sanders – and it would be an easy payday – I will wait to debate the first place finisher in the Democratic Party, probably Crooked Hillary Clinton, or whoever it may be.”

Sanders quickly slammed Trump’s will-he-or-won’t-he act, and used it to mount the argument anew that he would prove a better general election opponent.

“In recent days, Donald Trump has said he wants to debate, he doesn’t want to debate, he wants to debate and, now, he doesn’t want to debate,” Sanders said in a statement. “Given that there are several television networks prepared to carry this debate and donate funds to charity, I hope that he changes his mind once again and comes on board. There is a reason why in virtually every national and statewide poll I am defeating Donald Trump, sometimes by very large margins and almost always by far larger margins than Secretary Clinton. There is a reason for that reality and the American people should be able to see it up front in a good debate and a clash of ideas.”

In a statement just minutes before Trump finally announced he wouldn’t debate, Sanders’ campaign manager said he was ready to accept offers by two broadcast networks to host the debate. Sanders suggested the debate after Clinton declined to face him before the California primary on June 7.

“We are prepared to accept one of those offers and look forward to working with the Trump campaign to develop a time, place and format that is mutually agreeable,” campaign manager Jeff Weaver said. “Given that the California primary is on June 7, it is imperative that this all comes together as soon as possible. We look forward to a substantive debate that will contrast the very different visions that Sen. Sanders and Mr. Trump have for the future of our country.”

The gambit still proved to be a win-win for both candidates, who earned headlines and television minutes highlighting Clinton’s refusal to debate. 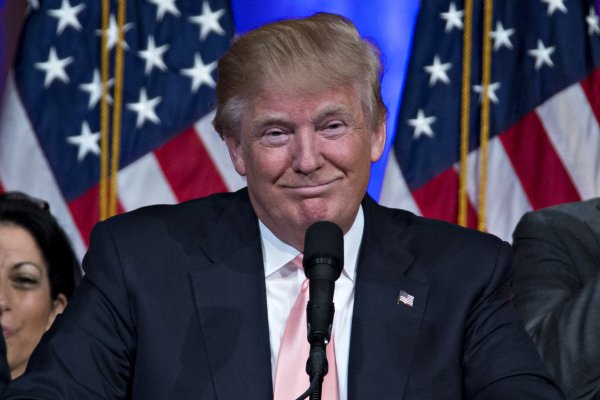 Donald Trump and Marco Rubio Are Playing Nice
Next Up: Editor's Pick