Jazz Jennings: When I First Knew I Was Transgender

Crown Books for Young Readers
Ideas
By Jazz Jennings
Jazz Jennings is a YouTube personality and the author of Being Jazz: My Life as a (Transgender) Teen.

“When did you first know?”

I get asked a lot of questions about my life, and that’s the one that comes up the most. The answer is easy. Ever since I could form coherent thoughts, I knew I was a girl trapped inside a boy’s body. There was never any confusion in my mind. The confusing part was why no one else could see what was wrong.

When my mom, Jeanette, got pregnant with me, she was convinced she was going to have a girl. At her baby shower, her friends all crowded around her belly and did the necklace test—that old-timey trick that’s supposed to predict what kind of baby a woman is going to have. You hold a necklace with something heavy attached to it, like a pendant or a ring, over a pregnant belly, and if it swings back and forth it means she’s having a boy. If it moves in a circle, a girl is supposedly on the way.

This witchy little version of a gender-test ultrasound nailed it with every single one of my mom’s pregnancies. It just took a little longer for everyone to realize the fetus fairies actually got it right with me. As I began to grow, my family thought my obsessive interest in girly things was just a normal developmental phase. I have really strong memories of the emotions I felt before I could speak, as well as my actions—I figured out how to undo the snaps on my onesie to turn it into a dress shortly after I began to walk.

Like any kid, I took a lot of baths with my brothers and sister, and I’d compare my genitals to theirs. My little penis felt so wrong on me. I wished I could take the sponge and wipe it off, and behind it I’d magically find a “gagina” like what my sister and my mom had. It definitely bothered me, but I remember feeling frustrated and confused more than anything else. It was a strange growth hanging off me that didn’t look at all like it belonged there.

When I finally did start to talk, I’d say “dwess like Awee” to my mom every time she put clothes on me. She misunderstood, thinking I was trying to show off my independence and letting her know that I could dress myself just like my older sister did.

I get why she would have assumed that at first. I was an extremely self-reliant toddler. Here’s a good example of just how in control I liked to be: At night, I slept with a pair of blankets, each covered with the same Noah’s Ark print. I liked to keep my temperature perfectly regulated while I slept, so I’d cover up with one blanket and keep the other by my side. I’d wake up as soon as I got too warm and immediately switch the covers, pulling the cooler one over me, the way most people flip their pillow on a hot summer night. I’d continue switching the blankets all night long. I wasn’t going to settle for anything less than what made me the most comfortable. And during the day, what made me comfortable was wearing a dress.

Around the house, I was pretty much allowed to wear whatever I wanted. I’d steal my sister Ari’s oversize pink or purple T-shirts and wobble around the kitchen in dress-up heels covered in feathers. (In fact, I first started wearing those heels back when I was still in diapers.) My parents were cool about it but drew the line at going out in public dressed in girls’ stuff. Mom would put me in shorts styled for boys, and I’d scream and cry as she dragged me to the car. I didn’t just like girly clothing—I felt ashamed and humiliated if I had to wear anything else.

Sometimes it helps people understand the feeling better if I put it like this: Imagine a young boy who is super into trucks and cars and playing in the mud. Then imagine that every time his parents take him out in public, they parade him around in a pink frilly dress with a parasol. The humiliation he’d feel is exactly the same humiliation I felt having to wear plain shorts and a T-shirt. I couldn’t understand why my parents, who were as loving and caring as anyone could hope for, would force me to go through that kind of torture.

The more words I learned, the more I started to verbalize my feelings. Whenever my mom or dad would compliment me by saying something like “Good boy,” I’d immediately correct them.

When I was around 2 years old, I had what I now refer to as the Good Fairy dream. After a long morning of playing with Ari’s dolls, dressing them up and staring enviously at the smooth area between their legs, I took a nap in my sister’s bed. I had no idea that I was asleep—the world seemed crystal clear as a grown woman wearing a blue gown floated into the room. She wasn’t quite like the imaginary creatures you see in cartoons, but I knew instinctively that she was a fairy, thanks to her gossamer wings, the glowing light all around her, and the magic wand that suddenly appeared in her hand. Other than those fantasy details, she looked and acted like an adult, full of purpose and authority.

I don’t remember her exact words, or even if she spoke out loud at all, but I knew why she was there. She promised to use her wand to turn my penis into a vagina.

I was ecstatic when I woke up. I felt like all the answers to my prayers were possible. The dream had felt so true, so real, that I knew it was just a matter of time before the fairy would appear again and do what she’d said she could do.

I ran downstairs and found my mother sitting in our living room.

“When is the Good Fairy going to come with her magic wand?” I asked.

“The Good Fairy, who will turn my penis into a vagina!” My mom tells me now that this was a huge turning point for her, the first time she truly began to realize that what I was going through probably wasn’t a phase. I remember being crushed when she said no fairy was going to come for me. I had been filled with so much hope when I’d woken up, and it was destroyed within a matter of minutes.

In response, I started to assert myself even more. My mom’s parents, Grandma Jacky and Grandpa Jack, were visiting us from New York not long after I had the Good Fairy dream. I marched down the stairs wearing a flouncy pink dress with a pink feather boa wrapped around my neck, along with my dress-up heels and loads of costume jewelry weighing down my wrists and fingers.

“My oh my,” Grandpa Jack said.

Grandma Jacky tells me that I got to the bottom stair, sat down, crossed my legs like a proper little lady, and just stared at them. She says she knew it was a declaration, and that I was definitely looking for some sort of reaction as I searched their eyes for approval. For her, the realization that something was different about me came less from what I was wearing and more from the way I was sitting and my body language.

During Grandma Jacky’s visits, I’d do things like put on a blond wig and a bra over my clothes while brushing my mom’s hair. One day when Grandma Jacky took me shopping and she told me I could pick out a toy, I headed straight to the Barbie aisle. In my child’s mind I remember it as a wall of pink that seemed to go right to the top of the ceiling and stretch the length of the store in either direction. I was allowed to pick a doll instead of the G.I. Joe figure Grandma Jacky knew I wouldn’t want anyway.

That didn’t stop her from trying to get me to play with boy toys. I had no idea that she’d call Ari and ask her to get me interested in toy trucks, to which Ari would reply, “Oh, Grandma,” with an eye roll practically visible through the phone. My siblings simply didn’t care. They didn’t get why anyone thought what I liked was a big deal.

It wasn’t like Mom had never heard of someone being transgender. She had a general understanding of what it meant, as did Grandma Jacky. It had just never occurred to them that a kid could know with so much certainty at such a young age. Mom took all this information to my pediatrician, who, after giving her a pretty concerned look, recommended that we visit a child psychologist.

I was 3 when we went in for the appointment, and I liked Dr. Marilyn right away. She had a very calm and soothing voice like Grandma Jacky’s that made me feel safe.

That was the first day I ever heard the word “transgender.” I remember feeling this overwhelming sense of relief that there was finally a word that described me—a girl who had accidentally been born into a boy’s body.

This article was adapted from Being Jazz: My Life as a (Transgender) Teen. Text copyright 2016 by Jazz Jennings. All rights reserved. 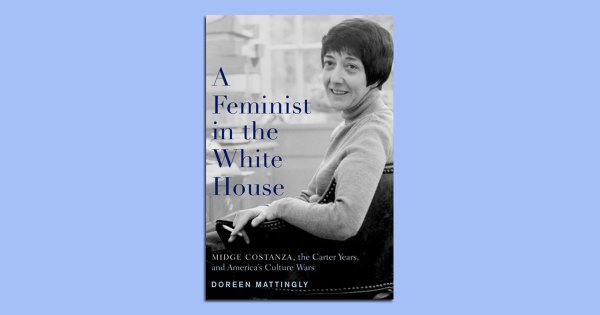 The Rise and Fall of the First Female Assistant to the President
Next Up: Editor's Pick