President Barack Obama on Friday visited Hiroshima, the first city in history to be targeted with a nuclear bomb, becoming the first sitting President to do so more than seven decades after the attack.

Obama arrived at the Hiroshima Peace Memorial Park alongside Japanese Prime Minister Shinzo Abe. The two leaders laid wreaths in front of the cenotaph for the victims of the bomb.

“Seventy-one years ago, on a bright cloudless morning, death fell from the sky and the world was changed. A flash of light and a wall of fire destroyed a city, and demonstrated that mankind possessed the means to destroy itself,” Obama said.

“Why do we come to this place, to Hiroshima? We come to ponder a terrible force unleashed in the not-so-distant past. We come to mourn the dead, including over 100,000 Japanese men, women and children, thousands of Koreans, a dozen Americans held prisoner. Their souls speak to us. They ask us to look inward. To take stock of who we are, and what we might become…..

…..That is why we come to this place. We stand here in the middle of this city and force ourselves to imagine the moment the bomb fell. We force ourselves to feel the dread of children confused by what they see. We listen to a silent cry.”

Ahead of the visit, Obama had confirmed that he would not apologize for President Harry S. Truman’s decision to drop the bomb toward the end of the war. On August 6, 1945, a U.S. Air Force plane dropped the bomb named Little Boy on the city, leading to the deaths of an estimated 140,000 people. A second bomb was dropped on Nagasaki three days later, killing another 70,000 people.

Obama told a news conference Thursday his visit was also a reminder of the need for a “sense of urgency” about the risks of future nuclear conflict, singling out North Korea’s pursuit of an atomic bomb as “a big worry for us all.” 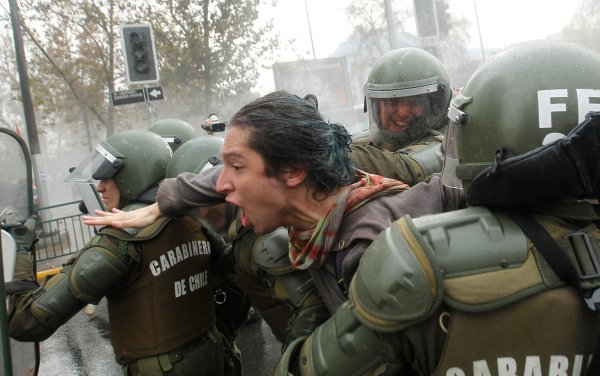 Chile Student Protests Erupt Into Violence
Next Up: Editor's Pick