Hiroshima: What My Japanese Grandfather and American Father Taught Me About Peace

Schoolchildren look at an old photograph of the Atomic Bomb Dome before the bombing on May 26, 2016, in Hiroshima
Jean Chung—Getty Images
By Hannah Beech / Shanghai

My grandfather was a kamikaze — a successful one. My Japanese mother never met her father so it was hard for her to miss him. Instead, some of her earliest memories were of American G.I.s handing out candy. They were big, blond and blue-eyed, strapping specimens of the U.S. occupation of Japan after its World War II defeat.

My mother would go on to marry an American, one who served in World War II on the Allied side. My father — neither big nor blond nor blue-eyed — had been a U.S. Marine correspondent, who covered some of the fiercest battles of the Pacific, from Iwo Jima to Tarawa. In the American Deep South where my father grew up, my mother, more than a generation younger, was referred to as the “Jap wife.” (She responded, cheerily, that she was now related to “barbarians.”) In rural Japan, one of my mother’s relatives, a priest in the native Shinto faith, refused to bless my parents’ union.

As U.S. President Barack Obama made his historic visit Friday to Hiroshima — a city that denotes both ferocious war and enduring peace — I think of how quickly mistrust on both sides of the Pacific has dissipated. Wartime enemies are now not only friends but also allies, despite disputes over U.S. bases on Japanese soil and the occasional crimes American servicemen have committed against locals. Also, the yellow peril has migrated. Japan’s spectacular economic rise was followed by a postbubble humbling. Today, the role of America’s Asian adversary is filled by China, which has replaced Japan as the world’s second-largest economy. U.S. Congressmen who once worried about the Japanese snapping up Rockefeller Center fret about hordes of rich Chinese buying up American real estate.

Obama’s pilgrimage to Hiroshima, ground zero of atomic annihilation, was meant to celebrate a peace that has lasted for seven decades. By laying a wreath at a cenotaph for the 140,000 victims of a bomb codenamed Little Boy, he also honored the more than 60 million people who were killed by World War II. During a speech at the Hiroshima Peace Memorial Park, Obama warned against assuming history turns in circles. “We’re not bound by our genetic codes to repeat the mistakes of the past,” he said. “We can tell our children a different story.”

Read More: Why the United States Dropped Atomic Bombs in 1945

Yet news of the U.S. President’s visit has dredged up ugly memories. Obama will not apologize for Harry S. Truman’s decision to unleash atomic weapons, making the U.S. the only country on earth to have acted as nuclear aggressor. Japanese civilians, along with tens of thousands of Koreans who lived in Hiroshima and Nagasaki, suffered skin flayed from irradiated flesh and decades of disease even if they survived the initial blast. Historians wonder: Would Japan’s wartime leaders have surrendered without Little Boy and Fat Man? But victims abounded far beyond two flattened Japanese cities. Americans of a certain age recall the horrors of Japanese POW camps, the death marches and the cruelty that too often is cast as inherent in the Orient. Asians who found little peace or prosperity in Japan’s colonial enterprise, the Greater East Asia Co-Prosperity Sphere, remember sexual slavery and starvation.

In China, where I now live, Japanese atrocities are relived in textbooks. The horrors are real, but the ruling Chinese Communist Party has also found political expediency in highlighting foreign aggression and underplaying its own sins. Political campaigns — like the Great Leap Forward, which unleashed a great famine, and the Cultural Revolution — destroyed millions of Chinese lives. There is, however, no mathematical equivalency: one Nanjing Massacre does not cancel out two atomic bombs on Hiroshima and Nagasaki. Both are awful. Both are parts of my heritage.

There is, in Japan, a cauterized attitude toward the war. The millions of Asians who suffered under the boot of the Japanese imperial army wonder why Japanese apologies still feel lacking — when they come at all. It was only when my mother attended graduate school in the U.S. that she learned the full extent of Japan’s wartime aggression. But the amnesia is directed inward too. Last year, my husband and I took our young sons to the Fire Museum in Tokyo because, like boys anywhere, they love fire stations. One of the exhibits referred to a time in the 1940s when firefighters were particularly busy; it did not specify who caused Tokyo to burn.

My Japanese grandmother lived through the firebombings of the Japanese capital, the inferno of shoji screens and wooden homes inflicted by American planes overhead. At least 100,000 Japanese civilians died during those raids, a fact that few Americans know. My grandmother, a war widow, did not hold Americans — as a people — accountable for Tokyo, Hiroshima or Nagasaki. When I was a little girl, she would make me the Western dishes she had learned to cook before the war when such food was the height of sophistication. I was her American grandchild, so I ate hotcakes, potato croquettes and pork cutlets. (Frankly, I preferred her Japanese pickles and other fermented delicacies.) From the ruins of wartime loss and occupation, Japanese came to love jazz and jeans and mayonnaise.

Like many members of that great generation, my grandmother did not dwell much on the past. Japan was too busy rushing forward. Now that Japan’s hawkish Prime Minister Shinzo Abe is moving the country rightward, some outsiders wonder whether the nation’s lack of introspection could cause militarism to metastasize again. After all, Japan’s decades-long commitment to pacifism reflects both atomic victimhood and the humiliation of defeat. It does not, in the German way, speak to a national soul-searching about its wartime crimes.

Yet I do not worry that young Japanese will suddenly militarize en masse. I remember my grandmother’s description of what it was like to hear Emperor Hirohito’s message of surrender on the radio, the demi-divinity for whom her husband had sacrificed his life. It was, she said, such a high voice, such a human voice. We are all fallible but we move on. 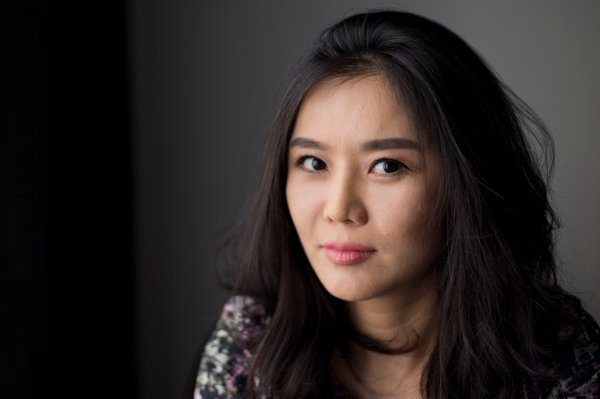