HIROSHIMA, JAPAN - MAY 27: U.S. President Barack Obama gives a speech during his visit to the Hiroshima Peace Memorial Park on May 27, 2016 in Hiroshima, Japan. It is the first time U.S. President makes an official visit to Hiroshima, the site where the atomic bomb was dropped in the end of World War II on August 6, 1945. (Photo by Atsushi Tomura/Getty Images)
Atsushi Tomura—Getty Images
By Ian Bremmer

Barack Obama’s second term has seen a number of foreign policy breakthroughs, including the lifting of America’s long-standing arms embargo against Vietnam just this week. These five facts explain why Obama’s overtures have worked in some countries but not in others.

For years the U.S. maintained that lifting its arms embargo was contingent on Vietnam improving its human rights record. There’s no compelling evidence that substantial progress has been made, but the shifting geopolitical balance in Asia has shifted Washington’s thinking, and China’s growing assertiveness in the South China Sea (SCS) has put neighboring countries on edge. The SCS’s strategic importance cannot be overstated: 1/3 of all global maritime trade travels through these waters, and there may well be vast amounts of oil and gas beneath its seabed. Officially, the US is calling for a “peaceful resolution” of boundary disputes in the SCS. The end of the US embargo signals to China that it won’t stand by while Beijing throws its weight around Asia.

There’s more to this story. Obama’s crowning foreign policy achievement will be the Trans Pacific Partnership trade deal, which, if approved—most likely during the upcoming “lame duck” session of Congress—will lower barriers to trade and investment across 12 countries that make up 40 percent of the world’s GDP. Vietnam stands to be the deal’s single biggest beneficiary, boosting its economy 10 percent by 2030. And at a time when many people around the world are pushing back against trade deals, Vietnam is one of the few remaining unabashed cheerleaders of globalization. A 2014 Pew Research survey found that some 95 percent of Vietnamese citizens say trade is good, and 76 percent have favorable views of the US. This is a country that offers Washington real opportunities for security and commercial gains.
(Business Insider, New York Times, Wall Street Journal, Pew Research)

Cuba’s leaders can’t maintain the status quo. For decades the island’s Communist government has depended on friendly leftist governments to keep the country afloat. The Soviet Union was the principal benefactor until its collapse in 1991. In recent years, Cuba has sent doctors to Venezuela in exchange for 100,000 barrels of oil a day to help fuel the country’s economy. It also received aid from Venezuela valued between $5 and $15 billion each year, equivalent to 15 percent of Cuba’s GDP. That’s no longer possible, given Venezuela’s own economic problem. Obama saw an opportunity, and he grabbed it—with a little help from Pope Francis, who mediated early talks with Cuban leader Raul Castro.
(Washington Post (a), Washington Post (b), TIME)

3. Iran
For decades, Iran’s theocratic regime has railed against the West, painting it as an existential threat to the continued survival of the Islamic Republic. It should have worried more about its stagnating economy. Iran was exporting 2.5 million barrels of oil a day back before economic sanctions were tightened in 2012; by 2014, oil exports had fallen to just over a million barrels a day. For a country who relies on energy exports for nearly a quarter of its GDP, that represents a significant hit to its cash flow.

It gets worse—Iran has long been considered the best-educated country in the Middle East, but an educated population becomes a problem when there aren’t enough jobs to go around. Each year, 1.2 million young people enter the job market in a country with an unofficial youth unemployment rate estimated at more than 50%. It’s difficult to justify stifling your economy to pursue a nuclear program whose long-term security and economic benefits are murky at best. That gave Obama the opening he needed. A tightening of sanctions presented the US and its allies with an opportunity to draw Iran to the negotiating table and to continue to bargain until Iran offered an acceptable deal. There won’t be a near-term thaw in US-Iranian relations, but the nuclear deal creates a long-awaited opening for genuine longer-term progress.
(Heritage Foundation, New York Times)

4. North Korea
Some regimes open up in hopes of maintaining political stability; for North Korea, political stability depends on isolation. To that end, Kim Jong Un has spent the past five years consolidating his power without interference from outsiders. Of course, North Korea is only ably to do so because China provides food, fuel, and political cover. Beijing is responsible for 57 percent of North Korea’s imports and is the final destination for 42 percent of the DPRK’s exports. China accounts for a whopping 70 percent of North Korea’s trade volume. It’s been keeping North Korea afloat for decades. Kim Jong Un knows that better relations with the US depend on political and economic reforms that would surely destabilize his government. Washington shouldn’t hold its breath.
(The Diplomat, Council on Foreign Relations)

5. Russia
Russia and the handling of the Ukraine crisis has been Obama’s biggest foreign policy failure to date, in part because a confrontational approach has only given Putin greater incentive to demonize the West. Vladimir Putin has used conflict abroad to boost his popularity at home throughout his tenure, up to and including his land-grab of Crimea. In a Pew Global study conducted last summer, 88 percent of Russians had confidence in Putin to do “the right thing” regarding world affairs. Over 80 percent of Russians approved of Putin’s handling of individual relations with the US, Ukraine and the EU.

Of course, oil price volatility combined with ongoing sanctions have hit the Russian economy hard—in 2015, Russia’s GDP fell 3.7 percent while unemployment rose 7.4 percent. Yet Putin’s approval ratings still top 80 percent. He used the last decade of high oil prices to build up a foreign reserves buffer of nearly $600 billion dollars. Russia has needed to dip into those savings, but it still has more than $375 billion in emergency funds at its disposal. Combine that with Putin’s ongoing popularity, and it doesn’t look like Russia will need better relations with Washington this year or next.
(Pew Research, International Business Times, Levada Center, Bloomberg)
***
We expect our presidential candidates to tell us exactly what they’ll do once in office. The reality is that, especially for foreign policy, a commander-in-chief can usually do little more than seize opportunities as they arise—and try to sow the seeds that might one day create new ones. 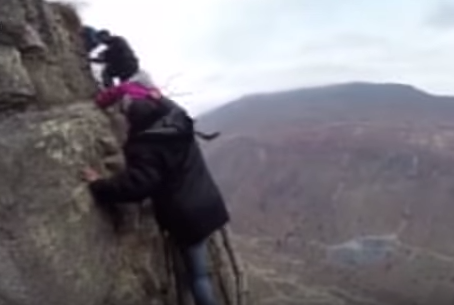 See The World's Scariest Journey To School
Next Up: Editor's Pick