Surveillance footage from a GameStop video game store in Maryland shows a little boy with a stuffed animal throwing two punches as gunmen ordered him and his family to the ground while they robbed the place.

The family—who have opted to remain anonymous because the assailants are still at large and to protect the anonymity of their son—had been at dinner after the boy’s soccer practice, where he kept talking about a Yoshi stuffed animal for sale a GameStop, the Washington Post reports. Yoshi is a small green dinosaur and one-time sidekick to Mario and Luigi who has gone on to a successful solo career in later Nintendo video games.

The family went to GameStop where the boy, who is under 10 years old, picked out a Yoshi doll while his parents searched for a gift to bring to a birthday party. Two masked and hooded gunmen dressed in black entered the store ordering the boy’s mother and father to the floor, the Post reports. One of the gunmen approached the boy, who tried to fight him off. The robbers made off with cash and no one was seriously injured, though the father said the boy understands the guns were real and was very shaken up by the incident. He carries the doll with him around the home. “He feels like he’s being protected,” the father said. 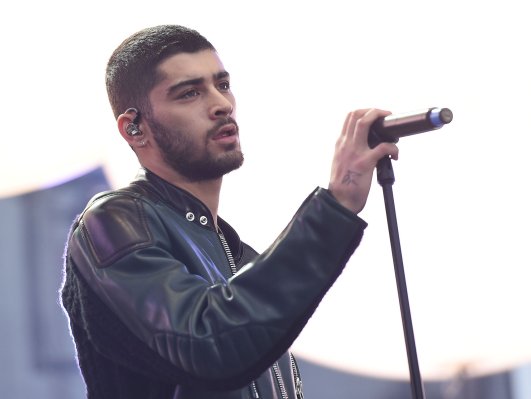 Zayn Malik's New Footwear Trend Will Be A Hit With Indecisive Fashionistas
Next Up: Editor's Pick