How Trump Went Mainstream (and You Can Too!)

I know the impermissible can quickly become acceptable, as it has with premarital sex, talking on your phone in public, selfies and sending photos of your penis, unless that’s still not O.K., in which case I was totally kidding. Still, it seems strange that less than a year ago, when Donald Trump announced his candidacy by saying that Mexican immigrants are “bringing drugs, they’re bringing crime. They’re rapists,” he was banished from the mainstream. NBC, which aired his Celebrity Apprentice and beauty pageants, declared it was “ending its business relationship with Mr. Trump.” The Pope called him “not Christian,” which is something so harsh the Pope has not even called me that, and my name is Joel Stein. Macy’s discontinued its line of Trump clothing, and Serta stopped selling the Trump Home Mattress, which, I’m guessing, had a recording inside that said, “All are impressed with how nicely I have treated women, they found nothing. A joke!”

Since then, Trump has said even more offensive things. He wants to bar Muslims from entering our country, condones torturing family members of terrorists and thinks John McCain is “not a war hero” because, Trump said, “I like people who weren’t captured.” He has condoned violence at his rallies. Yet now Trump is welcomed on NBC to host Saturday Night Live and to joke around with Jimmy Fallon. He’s invited to meetings with mainstream politicians who have condemned his statements. It’s not that these people have changed their minds and now agree with Trump. But they no longer find him or his ideas so repulsive they need to ostracize him. It’s as if Minnesotans all went back to having their teeth fixed by the guy who killed Cecil the Lion. And he still kept killing beloved African lions.

To find out how this transformation takes place, so I can pull off this same trick after some of the offensive columns I’ve written, I read a new paper co-written by Yale philosopher Joshua Knobe, titled “Folk Judgments of Normality: Part Statistical, Part Evaluative,” that examines how folk judgments of normality are part statistical and part evaluative. I didn’t really understand the paper. So I called Knobe.

Apparently, he, with his co-author, Adam Bear, did an experiment where he tried to figure out how people decide what’s acceptable: their own values or what everyone else is doing. Specifically, he asked people to list their guess for the average, ideal and normal amounts of TV watching, sugary drinks per week, books read each year, calls to your parents every month and, oddly, “drinks of frat brother per weekend,” which I’m pretty sure is just Yale guys trying to sound cool. Knobe found that what people consider normal is a mix between their ideal and the average, and we lean heavily toward the latter. “If you’re eating a steak right in front of a moral vegetarian, they don’t react like you’re doing something immoral. That’s because they think what you’re doing is normal,” Knobe told me. And, I’m pretty sure, delicious.

Our moral horror crumbles from even a light application of mass opinion. Which makes sense if you want to create a community. You have to engage with people you don’t agree with if they make up a sizeable population–otherwise, you’re a smug liberal jerk with no friends and nothing but an MSNBC hosting gig. It’s why most people who are religiously opposed to homosexuality now associate with gay people. It’s why abolitionists in the antebellum South wouldn’t turn down party invites to Monticello. It’s why we trade with China. And it’s why Trump is now welcomed at all the chummy and impressive events that nominees get invited to. “The thing you’re observing about Donald Trump is that people are thinking that being racist is in some weird way normal,” Knobe said. Trump, of course, has said, “I am the least racist person that you have ever met.” That’s how normal it’s become.

But we should also be aware of our complicity in normalizing the dangerous. So until this election is over, I vow not to invite Donald Trump to my house. I will also not pour the bottle of Trump sparking wine I own, even in a mimosa where no one would know. If I play bridge, I will refer to playing my chosen suit as using an “upstage card.” If I write a column about some silly inconsequential election thing, like the conventions, I will not treat his candidacy like it is just any other. And when President Trump is sworn in, I will beg the TIME editors to scrub this column from the Internet. At some point, only a moron doesn’t cave to the masses. 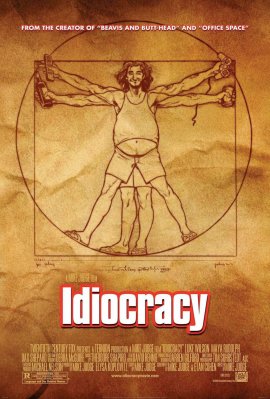 We Have Become an Idiocracy
Next Up: Editor's Pick