Tens of thousands of people gathered in Zimbabwe’s capital, Harare, Wednesday, to support President Robert Mugabe, in what was dubbed a “one million-man” march.

The rally, organized by the ruling ZANU-PF party’s youth wing, took place amid tensions in Mugabe’s party over who might succeed the 92-year-old leader, Reuters reports. Speaking to the crowd, many of whom had been bused in from all over the country, Mugabe denounced the factional in-fighting between senior party members as “treasonous.”

Mugabe has controlled the southern African nation since its independence from Britain in 1980, saying that he will rule until his death. However, the First Lady Grace Mugabe, suggested during the rally that her husband would somehow continue to lead even after death.

When the veteran leader does finally release his grip on Zimbabwe, it remains unclear who will take over. Two main camps have emerged from within ZANU-PF: one linked to Grace and the other to Vice President Emmerson Mnangagwa. In March, former Vice President Joice Mujuru announced that she was forming a new political party, Zimbabwe People First, and was open to forming an opposition coalition in the 2018 presidential elections, according to Reuters.

Wednesday’s rally followed an opposition protest in April denouncing Mugabe and the government for failing to repair the country’s crumbling economy. Zimbabwe is suffering from rising unemployment, cash shortages and food scarcity. The U.N.’s World Food Programme estimates more than 60% of the population of 14 million live below the poverty line and about 2.8 million people are food insecure. Another U.N. estimate predicts 4.5 million will need food aid by next March. 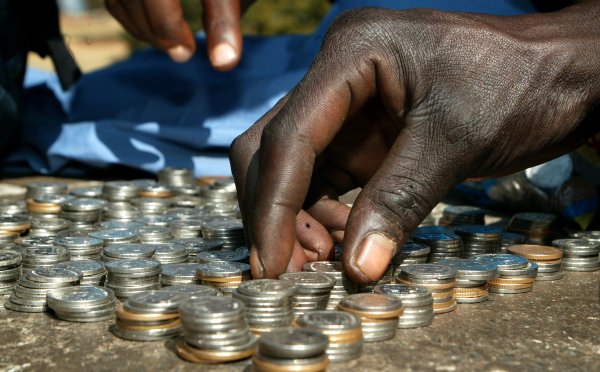 Zimbabwe Is Running Out of Cash
Next Up: Editor's Pick