When you hear the phrase “floppy disk,” your mind (assuming you’re of a certain age) flashes back to those ubiquitous 3.5-inch versions that were AOL’s Johnny Appleseed in the mid-1990s, spreading “You’ve Got Mail!” across the land. Only the aged among us can recollect what came before: the behemoth 5.25-inch models that owned the (tiny computer universe of the) 1980s.

That’s why it might give you pause to learn that the Pentagon—that epitome of cutting-edge technology and the inventor of the Internet—still uses gargantuan 8-inch floppy disks, fossils from the 1970s, to help operate the nation’s nuclear weapons.

“Legacy IT investments across the federal government are becoming increasingly obsolete,” the Government Accounting Office said in a report released Wednesday. “For instance, [the Department of] Defense is still using 8-inch floppy disks in a legacy system that coordinates the operational functions of the United States’ nuclear forces.”

For youngsters, a footnote clarifies: “Introduced in the 1970s, the 8-inch floppy disk is a disk-based storage medium that holds 80 kilobytes of data. In comparison, a single modern flash drive can contain data from the equivalent of more than 3.2 million floppy disks.”

“The floppy disks are associated with a nuclear-communications system that was unreliable even when the system was upgraded in the 1970s,” says Bruce Blair, a former Air Force ICBM launch-control officer who now studies nuclear weapons at Princeton University’s Program on Science and Global Security. “Command and control always gets the short end of the modernization stick.”

The huge floppies are part of the Pentagon’s “Strategic Automated Command and Control System,” and are part of a 53-year old computer network, the Pentagon’s oldest—and one of the oldest in the U.S. government, according to the GAO. “This system coordinates the operational functions of the United States’ nuclear forces, such as intercontinental ballistic missiles, nuclear bombers, and tanker supports aircrafts,” the report noted. “It runs on an IBM Series/1 Computer—a 1970s computing system—and uses 8-inch floppy disks…Replacement parts for the system are difficult to find because they are now obsolete.”

Precisely what does the Strategic Automated Command and Control System do? “For those in the nuclear command area, the system’s primary function is to send and receive emergency action messages”—orders to launch weapons—“to nuclear forces,” the GAO said.

“The Pentagon needs to get its priorities straight,” counters Joe Cirincione, president of the Ploughshares Fund, a disarmament group that has questioned the need for the military’s plan to replace its nuclear triad of bombers, missile-firing submarines and land-based missiles. “It might be a good idea to bring our command-and-control into the modern era before spending $1 trillion on a suite of new weapons.”

The GAO said the Pentagon “plans to update its data storage solutions…by the end of fiscal year 2017.” No word on whether it plans to upgrade to 5.25-inch or 3.5-inch floppies. 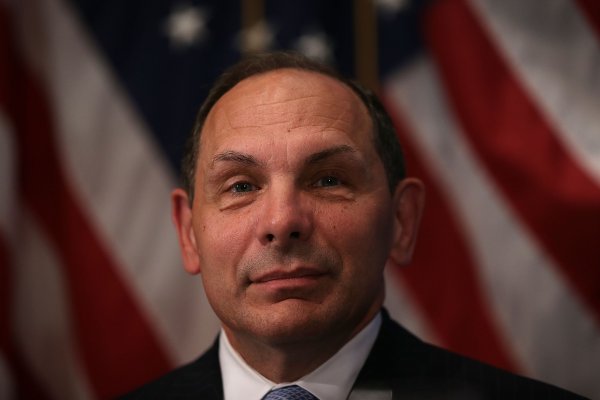 VA Secretary Stands By Disneyland Comparison
Next Up: Editor's Pick