Riders of the Washington, D.C. Metro are bracing for a series of staggered shutdowns beginning this weekend to repair the rundown tracks and stations.

The capital’s beleaguered subway system, like those in New York and Boston, has been showing signs of its age recently, resulting in many hours of delays for frustrated commuters, as well as deadly accidents.

Using data from the Metro’s incident reports, spanning from May of 2012 to March of 2016, we calculated the total wait time for each station over the 47 months measured. For transfer points and multiline stations, the total delay was divided the number of lines that run through that station, so as not to penalize busier terminals.

By that measure, we found the biggest waits at two terminal stations, Vienna Fairfax-GMU and New Carrollton, where riders faced 5,632 minutes and 4,283 minutes of delay, respectively. Here are the top 15 most-delayed stations per number of lines.

In the following map, the size of the circles represent the total delays per line at each station. Zoom in and out to see more detail.

End-of-the-line stations like New Carrollton and Franconia-Springfield were a source of significant delays across the system. Metro Center, a central hub for the WMATA system where several major lines cross, caused 2,826 minutes of delay during the period measured, faring similarly to Gallery Place/Chinatown—another major transfer point.

In April, the consulting firm McKinsey & Company released an 89-page report on the transit system that identified railcar maintenance as the “single most important determinant of service reliability,” noting that 63% of all delays were caused by maintenance issues. Despite these problems, the report noted that the Washington Metro performs similarly to other cities’ transit systems in terms of safety.

As Alex Altman noted in the May 12 issue of TIME, Metro’s new general manager, Paul Wiedefeld, is tackling this problem with a new approach. In a recent email to Metro employees, he announced a major restructuring of management, which included firing 20 managers “to improve effectiveness and accountability.” In testimony before the House Subcommittee on Highways and Transit, Wiedefeld noted that on-time performance of the system fell from 92% to 85% last year and that mechanical failures led to double the number of late trains compared to the previous year. Wieldefeld defended his plan to shut down major parts of the system for repairs. In a city where nothing seems to run on time, the trains are no exception—and it appears things will only get worse before it gets better. 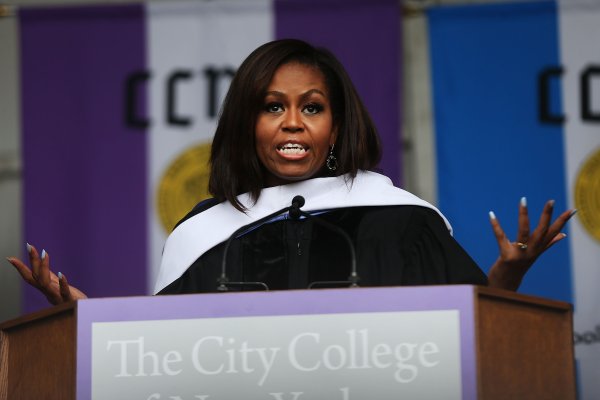 Michelle Obama Swipes at Donald Trump in CUNY Grad Speech: 'We Don’t Build Up Walls'
Next Up: Editor's Pick