Star Wars Has Galvanized Tourism in the West of Ireland

A replica of the sixth-century monastic settlement has been recreated on top of Ceann Sibéal on the Dingle Peninsula in Ireland's Co Kerry, ahead of "Star Wars" filming, April 30, 2016. The site, which includes eight beehive huts, is supposed to be the planet Ahch-To, home to the first Jedi temple where Luke Skywalker has been in exile, and is just one of several locations being used along the western Ireland seaboard.
Irish Independent/eyevine/Redux
By Ciaran Byrne/Dublin

The golfer focused hard and prepared to sink his putt from ten yards. “May the force be with you,” a voice said in the background. The golfer missed. On Dingle Golf Links in Ballyferriter, Co Kerry, the locals were regaling visitors with the latest Star Wars related stories, gossip and jokes. This south-western corner of Ireland was the latest location chosen by Lucasfilm for the filming of the eighth episode of Star Wars, a production that has gripped Irish public interest wherever it has landed.

Earlier this year, location scouts arrived on the Dingle peninsula, followed by hundreds of production staff and security. It mirrored a routine, carried out earlier this month at Malin Head, County Donegal, over 300 miles to the north, and in recent weeks at Brow Head in neighboring County Cork.

The combination of filming, film fans and other tourists have given a major boost to Irish tourism. So far this year the country has seen a 17% increase in overall visitor numbers when compared to 2015. They’re coming from everywhere – North America up 24%, British visitors are up 17%; Germany up 21%, Belgium, Netherlands and Luxembourg up 31%.

Industry figures claim research suggests about 35% of tourists are influenced in their destination choices by what they see on screen. In Ireland’s case, that includes movies such as Saving Private Ryan, Braveheart, The Quiet Man, Brooklyn, Sing Street, the Star Wars franchise, and various TV shows.

Filming in Ballyferriter and other local spots is centered on a spectacular headland called Ceann Sibéal where a collection of beehive-shaped huts has been built to represent a Jedi temple. Construction workers built roads to bring the trucks, scaffolding, lighting, trailers, food, props and people up to the closed set. Lucasfilm later posted a full-page ad in an Irish newspaper to thank locals for their support and hospitality.

Below the headland, they are counting the benefits of movie-making. Even local schoolchildren got their reward; Joonas Suotamo, the actor who now plays Chewbacca popped in to visit kids at a primary school – in full costume.

The Irish Examiner reported that almost every bit of accommodation on the peninsula was booked out. “Locals have been approached and offered €450 ($510) a week to rent vacant houses which have not normally been let, to riggers who are working in shifts putting up the huge scaffolding and the 350 people employed on the set, which is under tight security,” the Cork-based newspaper said.

As in Malin Head last month, Lucasfilm succeeded in persuading the Irish Aviation Authority to implement a special ‘no-fly zone’ to prevent drones flying over the set, some of which can be seen from the the golf links.

“The golfers are more interested in sinking their putts than monitoring the activities of the Jedi Knights,” claims a local business owner who rented out property to cast and crew. “Dingle is busy all year round but this has upped the local economy to another level, it’s the equivalent of having a factory of 300 workers suddenly appearing with everyone spending big in the pubs, restaurants and shops. It’s caused a mini-boom.” Like many in Dingle contracted by Lucasfilm, the business owner has signed a confidentiality agreement.

But as filming in County Kerry wraps up, what of the long-term benefits for Ireland from all of this Tinseltown stardust? “Star Wars will take us into another dimension, it’s an absolutely colossal brand,” says Niall Gibbons, CEO of Tourism Ireland, the body that oversees tourism in the South and North of Ireland. His agency has an annual budget of more than €50m, substantial but a fraction when compared to the fortunes lavished on the making of a single Star Wars movie.

“Anything that gets the conversation going about Ireland is a benefit,” says Gibbons. “Screen tourism has always been there but what has changed the game is the enormous explosion in digital content which people can access instantly. As well as being home to the biggest production on the big screen in 2016 with Star Wars, we are also home to the biggest production in the small screen in Game of Thrones.

Tourism Ireland credits the HBO hit with the visits of 20,000 extra people to Northern Ireland last year which is why the body created a tourist trail built around scenes filmed there. “The agreement with HBO allowed us to tell a story about Northern Ireland,” says Gibbons. “It appealed to an audience of young people who would not normally consider coming to Northern Ireland.”

But others are not so sure about the long-term legacy bestowed after a film crew packs up and departs. Noëlle O’Connor, a lecturer at Limerick Institute of Technology and author of a study into Ireland’s ‘film induced tourism’, believes that after the big-movie hype fizzles out, the long-term economic impact is minimal. “Yes, the exposure for Ireland is amazing, all great, all hunky dory” she says. “But there are no long-term benefits.

“There is no proper research out there that proves people come here because of what they see,” she says. “I think the tourism board has done a marvelous job in highlighting the exposure for Ireland, but I remain to be convinced that people will come here after seeing Star Wars. I would love to be proved wrong.”

Correction: The original version of this article misstated the actor who visited a school in Ireland dressed as Chewbacca. It was Joonas Suotamo. 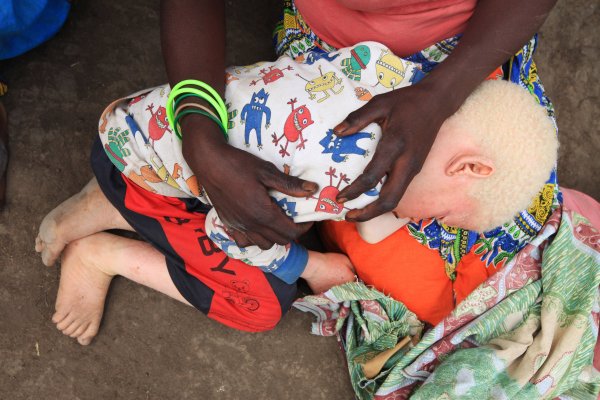 Albino People Are Being Killed for Their Body Parts in Malawi
Next Up: Editor's Pick