Here’s What We Know About The New Taliban Leader

Days after a U.S. drone strike in Pakistan killed Taliban leader Mullah Akhtar Mansour, the militant group has acknowledged his death and announced a new chief. Mullah Haibatullah Akhundzada takes over following a series of meetings among the group’s top leadership in the Pakistani city of Quetta, where Mansour was believed to be heading after returning from Iran when he was killed. Mansour had taken over last year, after it was revealed that the Taliban’s longtime leader Mullah Mohammad Omar had died in 2013. Missing from public view ever since the U.S. invasion of the country in the aftermath of the 9/11 attacks, Omar’s death had been covered up by the Taliban, with the group continuing to issue periodic statements in his name in the two years after his passing. Widely revered among the Taliban rank and file, confirmation of his death set-off a fractious internal battle inside the group, with further discord still possible as Akhundzada takes over. Here is what we know about the violent insurgent movement’s new leader.

Unlike Mansour, Akhundzada has strong religious credentials as the group attempts to put on a united front

Although Mansour had deep roots in the Taliban, joining the movement in its early stages and directing the group’s activities during the period that Omar’s death was kept secret, he lacked the religious aura that Omar had built around himself. Styling himself as the “leader of the faithful,” Omar cultivated an image as a warrior-cleric, including appearing outside Kandahar’s holiest shrine in the mid-90s donning a cloak that was said to belong to the Prophet Muhammad.

Read More: The Tale of the Pakistani Taliban Father Whose Baby Had Polio

Mansour had no such religious authority when he took over. (Although Taliban propaganda announcing his elevation last year conferred upon him the title of leader of the faithful, his legitimacy was questioned by religious leaders amid internal fissures.) On the face of it, Akhundzada, who was one of Mansour’s deputies, is different — he comes with stronger religious credentials, an extremist cleric who was formerly the head of the Taliban’s judiciary, at a time when the insurgent movement is trying to head off the prospect of another internal leadership crisis.

Like both Omar and Mansour, Akhundzada has close links to the Taliban’s heartland in southern Afghanistan

In the immediate aftermath of Mansour’s killing, one of the Taliban commanders considered a likely new leader was Sirajuddin Haqqani, the slain militant leader’s most prominent deputy. As head of the Haqqani network, he has strong credentials as a battlefield leader. His group — which has long been suspected to have the backing of elements within the Pakistani establishment, a claim Islamabad denies — has had a hand in some of most bloody attacks during the Afghan insurgency, including, most recently, a Kabul car bomb last month that killed over 60 people.

He does not, however, have a significant connection to Kandahar province, the southern region known as the Taliban’s birthplace. Both Omar and Mansour had close links to the Kandahar region, a trend that continues with the appointment of Akhundzada, who is reported to hail from the Kandahar’s Panjwai district. Akhundzada’s connection to the insurgent movement’s heartlands could potentially help him bring together local Taliban commanders and ordinary fighters who might otherwise trigger fresh turmoil. Haqqani remains a significant player, staying on as deputy leader alongside Mohammad Yaqoob, a son of Mullah Omar’s who was also initially seen as a possible candidate for the leadership.

Where Omar and Mansour had both first emerged as Taliban fighters against Soviet forces in the 80’s, Akhundzada is better known for his religious and legal background. Whether that translates into a Taliban more open to talking peace with the Afghan government and its international allies remains to be seen, however.

Last year, when Mansour took over, he was widely considered a relative moderate and pragmatist who favored engaging in peace talks with the government in Kabul. In fact, the opposite happened, as a nascent negotiating process stalled and Mansour directed a headline-grabbing raid on the city of Kunduz shortly after taking over. More recently, Taliban soldiers have been fighting Afghan forces in an attempt to take control of southern Helmand province. In statements after Mansour’s killing, his opposition to the peace process was citied by both American and Afghan officials. Whether the Taliban’s stance now changes under Akhundzada is still uncertain. 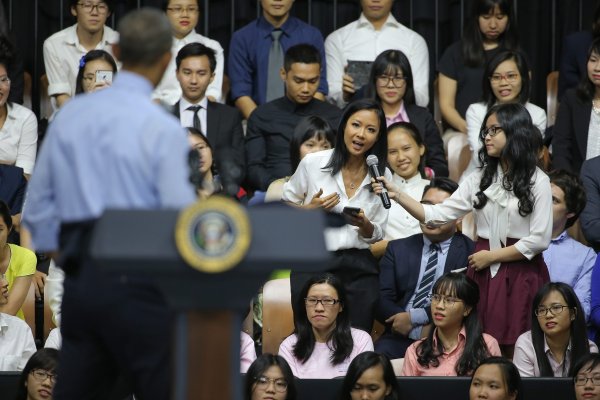 Vietnam's 'Queen of Hip Hop' Raps to Obama
Next Up: Editor's Pick