Kate Middleton Had 13 Doctors, 3 Midwives and 6 Other Helpers for Her Labor & Delivery

Prince William and Princess Kate used the occasion of a Buckingham Palace garden party on Tuesday to thank some of the medical team who helped deliver Prince George and Princess Charlotte.

The couple chatted with Professor Tiong Ghee Teoh, a consultant obstetrician and gynecologist, and anesthesiologist Dr. Johanna Bray, who were part of the 23-member Imperial College Healthcare team at London’s St. Mary’s Hospitalin 2013 and 2015.

Professor Teoh told reporters that they were part of the team on call for three months before the births in case extra help was needed.

“I was back-up to Guy Thorpe-Beeston [who delivered the prince and princess],” he said.

Dr. Bray told reporters, “We weren’t actually at the birth but were behind the scenes. We were all on call for three months – my husband did the childcare for three months! You never know when you need to be called. You need to be in town and available. If you are at a party you need to have your car keys at the ready. No drinking!”

“There were about 20 of us that would regularly meet to discuss things,” Dr. Bray added.

Said Professor Teoh: “We had a huge team. Anything that could possibly go wrong, we had a team of people behind each specialty. Everyone was sworn to secrecy.”

Dr. Bray explained that every woman giving birth has a similar team at their disposal, but given that Kate is a member of the royal family, she was in the unusual position of having the same team of people – almost all consultants – dedicated to her care.

“It was a wonderful feeling. At the time the NHS needs a bit of a pick-up, it was a real morale booster for St. Mary’s at the time,” she said.

Kate, said Professor Teoh, “was very appreciative. She said there were a lot more people behind the scenes than she realized.”

Dr. Bray said there might have been “fuss” behind the scenes, but on the day there was “no fuss at all.”

“She was a fit young woman, and that’s the most important thing,” said Professor Teoh.

Asked when the next royal baby might be, Dr. Bray joked, “That’s the million-dollar question – need-to-know basis!” 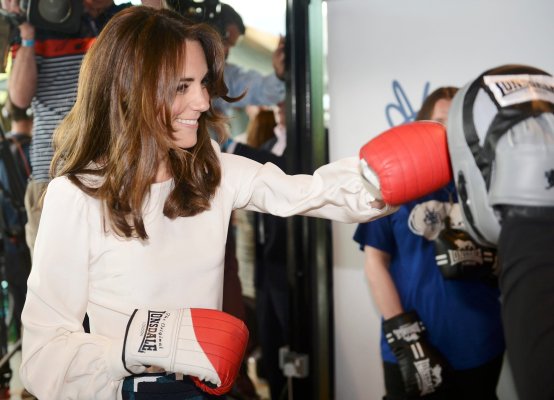 Kate Middleton Shows Off a 'Wicked Punch' at Charity Boxing Event
Next Up: Editor's Pick