What the Candidates' Rally Music Says About Them

People listen as Bernie Sanders speaks during a rally at Lincoln Park on May 23, 2016 in Los Angeles.
Matt McClain—The Washington Post/Getty Images
Ideas
By Simon Morrison
Simon Morrison is a music historian and the author of Bolshoi Confidential.

Though loath to join the political snarkatariat, I feel compelled (as a musicologist specializing in cultural politics) to comment on music in the US presidential election. Each campaign has a playlist that presumably reflects something about the candidate and the voters he or she is courting; after all, the music we love at once mirrors our deepest desires and projects our individual as well as collective imaginings. We listen to who we wish to be, with whom we would identify, where we want to belong. Yet for as much attention as the three remaining hopefuls have paid to the sound of their campaigns—as much time as they have spent considering the aural as a part of their image—they seem, if not unaware, then at least a little unsure of the power of music to move, motivate, and mobilize.

Consider Trump, the presumptive Republican nominee and now standard-bearer of the GOP. His playlist, available on Spotify, is eclectic, which is a polite way of saying nonsensical. The Beatles (“Hey Jude”) and Rolling Stones (“Start Me Up”) rub up against the chromatic fire and brimstone of Andrew Lloyd Weber’s Phantom of the Opera. Puerile hits like Twisted Sister’s “We’re Not Gonna Take It” no longer voice the frustrations of irrational teens pissed off at their parents, but rather the angst of the surprisingly loud “silent” majority.

Trump, being Trump, also uses the best (the very best, he would insist) music. Maybe he’ll even find a way to make Muzak music again, or something. In looking ahead to the GOP convention, I wonder if we might hear Puccini’s inspiring Romantic aria “Nessun Dorma” (None Shall Sleep) from the opera Turandot. It comes to Trump rallies via the Miss America pageant (Miss Arizona sang it in 2011). The aria is also a favorite of wanna-be winners of Britain’s Got Talent and crowds at the World Cup, so there’s also a certain foreign policy appeal. Its magic lies in the ascent from tonic to major seventh in the first section and the move to the subdominant at the end of the middle, amidst some compelling modal inflections. The aria concludes with the thrice-repeated cadential tag, “Vincero!” meaning “I will win!” The legendary tenor Luciano Pavarotti (“yuge” in every sense) jerked our tears with a stunning, if lip-synced, rendition of “Nessun Dorma” at the opening ceremonies of the 2006 Olympics in Turino, Italy. The key to success is to hold the final “o,” on a stressfully high B, for as long as possible. That hold is marked in the score by a fermata, the musical sign that means just keep going. It looks like two dots underneath an arch, much like the upside down smiley emoji.

Often Trumpeters (quoting Sarah Palin’s musicological bon mot) have heard the 1984 anthem “Born in the U.S.A.” at rallies. Bruce Springsteen, its composer, is beloved by Trump’s factotum Chris Christie, who exhibits a kind of passionate fandom usually associated with tween girls adoring a cute, coiffed boy. The title means what it says, but not in a chest-thumping, fist-pumping sort of way. Given that “Born in the U.S.A.” has so consistently and perniciously been misunderstood, I would suggest that the music actually works against the message. Everyone is happy to chant the chorus but conveniently forgets the words, which actually offer a searing indictment of America’s failures after Vietnam. “I had a brother at Khe Sahn/Fighting off the Viet Cong/They’re still there, he’s all gone,” mumbles Springsteen. This was Reagan’s campaign song in 1984. Conservative columnist George Will admitted at the time that he had not “a clue about Springsteen’s politics, if any,” but insisted that Springsteen was “no whiner, and the recitation of closed factories and other problems always seems punctuated by a grand, cheerful affirmation.” So somehow then the song becomes about making America great again? Springsteen himself, while playing a concert in the perennial swing-state of Pennsylvania, pointed out that the Reagan obviously hadn’t listened to the lyrics.

Were I appointed to advise Trump (unlikely, given we are of no blood relation) as his in-house political musicologist, I would have to suggest “O Fortuna” from Carl Orff’s Carmina burana as the best musical match to his political rhetoric. Carmina burana was, in fact, composed under Hitler but now is familiar from car commercials. The music intends to herd us together, march us into line, and enforce sonic submission. Monorhythmic sequences and frequent ostinati offer the perfect simulacra of campaign slogans that, repeated often enough, congeal as truth. Orff’s totalitarian blockbuster has the added benefit of relentless consonance and astonishing loudness. The music is dehumanizing. Perhaps, along these same lines, the mock fascist anthem “Amerika” by the German heavy metal group Rammstein could be performed. I commend the Trump team for sparing us the obvious: Pink Floyd’s The Wall.

A year ago, Trump and his campaign pretended to be “rockin’ in the free world,” playing Neil Young’s Grammy Award-winning 1989 thrash metal parody of that title. Young protested. He backs Bernie Sanders, the avuncular runner-up in the Democratic contest. Bernie’s playlist is dominated by the gut-and-wood, pseudo-acoustic sound of indie groups like Vampire Weekend, which once released a recherché song dissing the Oxford comma.

One of Bernie’s early campaign ads featured, predictably enough, Simon & Garfunkel’s symphonic epic “America.” It’s the kind of song that therapists love, saturated in melody and sentiment. The original folk revolution in the 1960s might have accompanied a radical critique of the hegemony, but now the music of the era sounds like just another soundtrack to a PBS documentary. “America” celebrates a place no one really knows. (What family laughs and plays games on a bus traveling the NJ Turnpike to New York City?) “I’m empty and aching and I don’t know why,” Paul Simon sings, ever in earnest. The song feels real, true to some immigrant experience, to the longings of a nation. But actually it’s about Simon & Garfunkel’s journey to fame on a major record label. Authenticity always sells.

At Bernie’s rallies, DJ Mel often spins funk, and this summer Omaha, Nebraska, will host Bernanza, a music festival. “There’s ‘no fracking’ way you’d want to miss this event,” the psychedelic rainbow website declares. The program transplants a typical weekend in Park Slope—complete with yoga and finger-painting—to the wheat fields of the midwest, featuring Mad Dog & the 20/20’s among other groups performing remixes from the Summer of Love.

By the time Mad Dog takes the stage, Hillary Clinton will doubtless have secured the democratic nomination, and her current market-tested playlist will likely shift. The cutesiness of Pharrell Williams’s “Happy,” from the Despicable Me 2 soundtrack, won’t play well against Trump. The song is fantastically repetitive, but the melody is less important than the rhythms, the fillip that keeps the snare drum just ahead of the beat and the high hat just behind. It’s the music of publicly educated, properly vaccinated children clapping with delight, while the gospelesque (not too black) interjections affirm that the “I” of “Because I’m happy” really means we. Like the candidate herself, “Happy” represents the work of an insider, composed by someone who knows how the bureaucracy of the music industry works, yet it represents itself, in the various official videos, as an interactive experience—a spontaneous happening.

The other tunes on the Clinton playlist are also recent—nothing betrays her age—and exemplify that most curious contemporary cultural phenomenon: the instant cliché. The melodic hooks, like the primary punch lines, are time- and market-tested. But the musical sheen of these pop hits was produced not in America, but the democratic-socialist dream-world of Sweden. (Two of the artists on Clinton’s list, Kelly Clarkson and Katy Perry, have enlisted Swedes as record producers.) The assemblage is pitch perfect from a Democratic demographic perspective, with Latin pop nudged up against the inoffensive feminism of Perry’s “Roar.” Jill Scott’s “Run Run Run” provides some street-cred with working moms: “I’m Superwoman/Flying through the city/There’s only one way to make baby go and get it/Overworked. Underpaid./Lord knows I need a raise.”

Sure it’s all calculated. But we live in the age of the simulacrum, of the pretend made real and the real made pretend. To wit: Disney World realizes the animated imaginings of Cinderella and her realm, while Donald Trump’s convention manager asserts that the presidency is but “the ultimate reality show.” Even in the world of music, the representation substitutes for the real. We find lyrics online, listen online, hear sounds created and played and recorded entirely online.

Yet flesh and blood and fingers and instruments and lives still surely matter, even as they may be ignored. While Clinton campaign deploys the slogan “I’m with Her,” I wish I could tell her about the country group of that same name. Sara Watkins, Sarah Jarosz, and Aoife O’Donovan pick and sing heart-wrenching acoustic ballads. “The music radiated togetherness,” raved critic Jon Pareles in the New York Times last year. Would that they showed up on a presidential playlist.

Simon Morrison is a Professor of Music at Princeton University and the author of the forthcoming book Bolshoi Confidential: Secrets of the Russian Ballet from the Rule of the Tsars to Today. 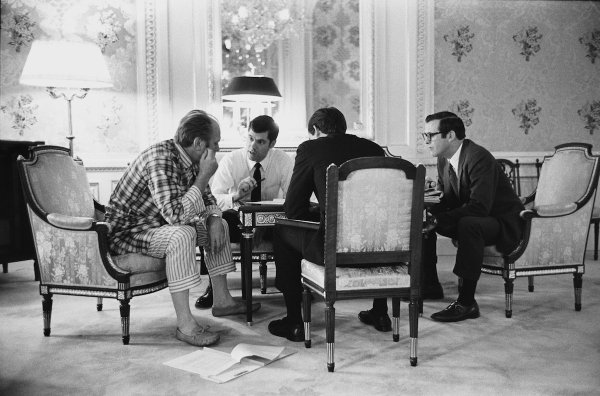 Here's What Happened During the First U.S. Presidential Trip to Japan
Next Up: Editor's Pick