Warning: This post contains spoilers for the sixth season of Game of Thrones as well as graphic imagery.

The sixth season of Game of Thrones is already halfway over, which means there are only five episodes to go until fans are faced with another 10-month hiatus. But before that long winter arrives, there’s sure to be a great deal more in store for the residents of Westeros and Essos.

Read More: We Analyzed Every Second of the New Game of Thrones Season 6 Trailer

While many of the scenes featured in this season’s trailers have already aired, there are some that remain a mystery. However — thanks to five episodes worth of knowledge — much of the footage doesn’t seem quite as cryptic as it once did.

Let’s take a look, starting with the March 8 trailer:

Uh oh, seems like Ser Davos is finally going to find out what happened to Shireen. It’s hard to imagine the Onion Knight will take kindly to the idea that Melisandre burned his young friend at the stake — even if the Red Woman did bring Jon Snow back to life.

In case you were still confused, Ramsay Bolton is a bad guy. Looks like he’ll be recreating his flayed man house sigil with a real live man to use as a scare tactic during a battle. Starks versus Boltons, anyone?

The fifth episode saw Sansa and Jon leaving Castle Black to recruit troops to join them in their quest to retake Winterfell. This moment will hopefully feature Sansa laying down the law to some unsuspecting northern houses.

We saw Tyrion release Rhaegal and Viserion, but haven’t seen them take advantage of their newfound freedom yet. Not to mention that Drogon has also been missing in action.

0:57 The Mountain and the Faith Militant

Cersei has stated she plans to demand a trial by combat at her upcoming court date with the High Sparrow. But judging by the recent Lannister-Tyrell pact to destroy the religious leader, it seems like she doesn’t intend to show up at all — cue her sworn protector finally getting to show us what he can do.

1:06 Littlefinger hangs out up north

Even though Littlefinger’s first meeting with Sansa didn’t go so well, we suspect she hasn’t seen the last of her former guardian. Could this be another secret meeting between the two? Or maybe it’s one with Ramsay? You never know with Littlefinger.

1:07 The return of Benjen Stark

The actor who plays Benjen, Joseph Mawle, has already been credited on his IMDB page as “Brother Beyond the Wall” in the upcoming sixth episode. All signs point to the fact that this fire-wielding rider will be him.

You may recognize those doors from Daenerys and Tyrion’s chat atop the Great Pyramid in the eighth episode of season five.

1:10 The Lannisters always…make us uncomfortable

What’s a season of Game of Thrones without at least one incest scene?

During a recent game of “Two Truths and a Lie,” Maisie Williams — who plays Arya — stated that her character is in the trailer more than people think. We’re willing to bet that was one of the truths.

Starks versus Boltons. Battle for the North. Bastard Bowl. Whatever you want to call it, it’s happening.

Tormund is definitely going to inflict some major damage on the Boltons. Hopefully he’ll dedicate every kill he makes to Brienne.

1:19 The Tyrells storm the Sept of Baelor

Grandma Tyrell isn’t going to let Margaery make that walk of shame without a fight.

Now that Daenerys has control of the Dothraki we’re bound to see the bloodriders take on some new opponents. The masters may have underestimated the Dragon Queen.

And now, the April 11 trailer:

The Dothraki now know why Daenerys is referred to as the Unburnt. Next they’re going to learn why she’s called the Mother of Dragons.

0:43 Sansa plans her own Red Wedding

A scene showing the Freys feasting alongside Lannister soldiers juxtaposed with Sansa saying, “It’s all I think about, what was taken from me,” can only mean one thing — revenge.

Looks like Ser Davos is in for the long haul with Jon. Here he appears to be scanning a battlefield in front of a Stark bannerman.

According to his character arc in the books, it’s about time for Jaime to head to the Riverlands. Let’s hope this storyline is more interesting than Dorne.

A shadow of a man stabbing another man in the back. Does this mean we’re finally getting a flashback to Jaime’s infamous murder of the Mad King?

The Onion Knight appears to be negotiating with someone in a Lannister-flag adorned hall. “The real war is between the living and the dead,” he says. “And make no mistake, the dead are coming.”

Sansa’s sadistic husband won’t be staying behind the walls of Winterfell during the impending Stark-Bolton battle. Time for someone to wipe that smug smirk off his face.

The peace in Meereen is apparently going to be pretty temporary.

Brienne and Podrick appear to have made it to the Riverlands in one piece. Could a Brienne-Jaime reunion be in the works? Sorry, Torienne fans.

1:32 The Lannisters send their regards

Looks like the new and improved version of the Mountain is going to have no trouble taking care of the Faith Militant. Not that we think the old version would have either.

Judging by the red and gold tents in the background, this scene seems to take place in a Lannister camp. Could that be Bronn putting our favorite squire in a choke-hold? 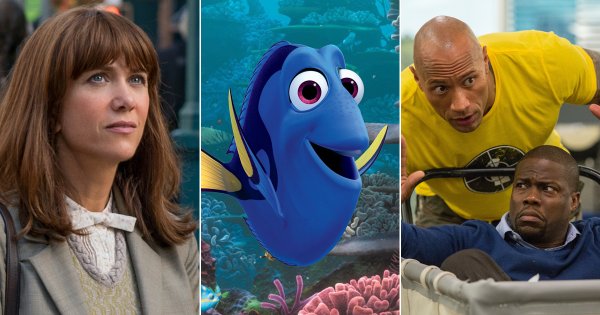 These Are TIME's Most Anticipated Movies of the Summer
Next Up: Editor's Pick