In the decades since her death in 1962, Marilyn Monroe has remained a sex symbol, an icon of her era, a money-maker and one of the most recognizable faces in the world. But even now—on what would have been her 90th birthday—some aspects of her personality remain less well-known.

Despite her immense fame, Monroe’s sexuality, feminism and political beliefs often get short shrift, argues historian Lois Banner, author of the 2012 biography Marilyn: The Passion and the Paradox. The question of the relationship between Marilyn Monroe and feminism is a hard one to answer—though Banner has looked at the star through a feminist lens, she is quick to point out that Monroe’s life ended before the movement had a chance to go mainstream. Monroe’s left-leaning politics, however, are much more clear.

Those beliefs were a product of her time, Banner says: being born in 1926 meant that she was a child during the Great Depression. Because her mother could not care for her, she spent her California youth bouncing between homes. “There was always the dry bread, the army cot by the water heater, the monthly visit from the county social worker who inspected the soles of her shoes and patted the top of her head and went away,” as TIME put it in a 1956 cover story. (“How did I get through it?” Monroe wondered aloud to the magazine’s reporter.)

Though some of the caretaker families were terrible to her, Banner says that she did find one family—the Bolanders—whom Monroe particularly liked. There, her foster father worked delivering mail in Watts, a largely African-American neighborhood. As a result of her own poverty and her close contact with people of other races, Monroe grew up with progressive views on race and what Banner calls a “populist vision of equality for all classes.”

Her background peeked through in her film roles, as she was often cast as a working girl. The most extreme example: Clash by Night, in which Monroe plays “a fish-cannery employee who bounces around in a succession of slacks, bathing suits and sweaters,” per TIME’s original review. On the set of 1950’s All About Eve, she was once warned not to be seen by studio executives reading radical books (the book that prompted the warning: the autobiography of muckraker Lincoln Steffens). Even as Monroe stepped out in public in glamorous evening gowns, she favored blue jeans and flat shoes at home. “She will say that she only likes fancy clothes when she dresses up, so you can kind of see [her populism] in what she wears,” Banner says.

In 1956, when she married the playwright Arthur Miller, her working-class roots blossomed into full-on political fervor. In 1960, she became a founding member of the Hollywood branch of the Committee for a Sane Nuclear Policy; that same year, as she kept a home in Roxbury, Conn., she was elected as an alternate delegate to the state’s Democratic caucus. She did not hide her pro-Castro views on Cuba or her support for the then-burgeoning civil rights movement.

“What really made her really openly political was the marriage to Arthur Miller,” Banner says. “He was the great love of her life.”

Broadway was not affected by McCarthyism and anti-Communist investigations to the same extent as the movie business, but Miller was called to testify before the House Un-American Activities Committee shortly before their marriage. Monroe was never called on, which Banner believes was because the anti-Communist Congressmen “thought she was just a dumb blonde.” (In fact, some historians have theorized that Miller saw Monroe as a political shield.)

So why isn’t Marilyn Monroe’s political side a greater part of her legend?

Perhaps it’s because fans don’t want to know that part, Banner says, or perhaps it’s just because there’s so much to say about her that it’s easy to skip one aspect or another.

“When you put it all together, [her political side] is pretty substantial. But in most of the biographies, including mine, it comes out as salt scattered on the biography, because one gets so fascinated by her psychological makeup,” she says. “But the political involvements are no less real.” 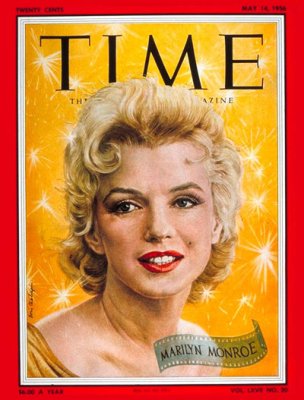 How Marilyn Monroe Became a 'Real Actress'
Next Up: Editor's Pick