Earth and Mars Are About to Get Very Cozy

Few things in space are as sloppy as a solar system—and few solar systems are as sloppy as ours. That can be a very good thing if you like cosmic sky shows, because now and again, the familiar nighttime heavens can change in dramatic ways. Monday will be one of those times, when Mars makes an unusually close pass by Earth, drawing nearer—and looming larger—than at any time since 2005.

Here’s what’s behind the cosmic coziness:

The orbit any planet makes around its parent star is fixed and knowable. Earth takes 365.256 days to make a single lap around the sun. (The 365 part is how we measure our year, and the .256 is why we tack on an extra day at the end of February every four years.) For Mars, a year is 686.93 days. For Neptune—well, a single Neptunian year takes 164.79 Earth years.

Those different orbital speeds mean that the distance between any two planets is always changing. As Earth zips around in the solar system’s No. 3 lane, for example, it sometimes finds itself on the complete opposite side of the sun from Mars, putting the two planets as much as 249 million miles (401 million km) apart. Every other year, however, Earth laps Mars, overtaking its pokier sister and bringing the two planets briefly as close as 33.9 million miles (54.6 million km). It’s during those biannual windows that NASA typically launches its missions to Mars, keeping the travel time from one planet to the other to a minimum.

And things get messier still. Planets don’t typically orbit perfectly in the flat, circling neatly around a star’s equator. Most are slightly inclined relative to that midline, moving above their sun’s equatorial plane at one part of their orbit and below it at another. Mars’ orbit is inclined 5.65 degrees relative to the Sun’s equator; Earth’s is a slightly more drunken 7.155 degrees.

For two planets to make an especially close approach like Mars and Earth are about to do, it means that the inner planet (Earth in this case) must be in its apehelion phase (cheating a bit away from the sun) when it passes Mars; and that Mars must be in its perihelion phase (cheating in). It also means that the planets must be close to one another in inclination to the sun, with both above the solar equator or both below it.

All of that is now lining up, with Mars and Earth set to pass each other at a relative shouting distance of 46.8 million miles (75.3 million km) on Monday, and even casual skywatchers will notice the difference without the aid of a telescope. Most of the time, Jupiter is the brightest object in the nighttime sky after the moon, but Mars will rival it in brilliance until June 3.

If you like what you see this week, you’ll love it in 2018—on July 27 of that year specifically. Mars is approaching the low point in its perihelion cycle now, but it’s not quite there yet, and Earth will have sped past already when it does reach that nadir. In 2018, we’ll pass Mars when it’s closer still to that low point, bringing the two planets just 35.8 million miles (57.6 million km) apart—about 24% closer than they’ll be this week.

And that is plenty close, thank you very much. About 4.5 billion years ago, the primordial Earth suffered a near-death experience when a rogue Mars-sized planetesimal collided with it, sending up a debris cloud that is thought to have been the raw material for the moon. The actual Mars is not about to jump its orbital lane and come careering our way.

But in a solar system born in violence, it’s always nice if very close encounters never become too close. 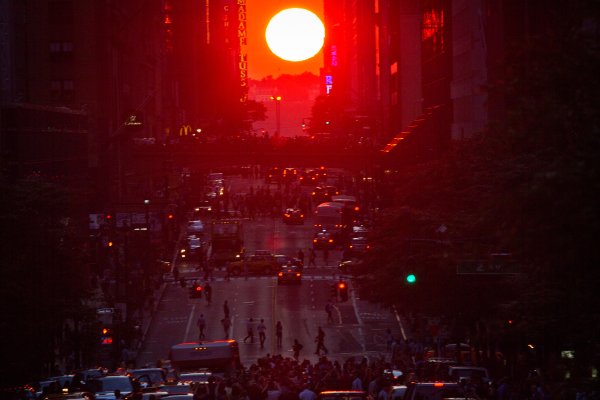 'Manhattanhenge' Is Coming Back to New York for Memorial Day Weekend
Next Up: Editor's Pick