Paul McCartney performs on stage during the 'One on One' tour at Key Arena on April 17, 2016 in Seattle, Washington.
Mat Hayward—Getty Images
By Tara John

Paul McCartney said that he took to drinking after becoming depressed after the Beatles disbanded in 1970— where he even contemplated leaving music altogether.

Speaking during a Mastertapes session at the BBC McCartney said: “I was depressed. You would be. You were breaking from your lifelong friends. So I took to the bevvies. I took to a wee dram. It was great at first, then suddenly I wasn’t having a good time”

Likening their split to army buddies never being able to see each other again, McCartney said that the split had him “not knowing if I was going to continue in music, that was depressing.” He said forming the group Wings was an attempt “to get back to square one.”

He also admitted that his late wife Linda McCartney was a terrible guitarist but added that John Lennon had also started his career playing the guitar badly.

McCartney’s Mastertapes sessions were in front of a star-studded audience, that included Brad Pitt and Noel Gallagher, where the 73-year-old recounted stories from his his career.

A filmed version of Radio 4’s Mastertapes with Paul McCartney is available on the Radio 4 website. The full, extended interview will then broadcast on BBC Radio 4 on May 28, 10-11am. 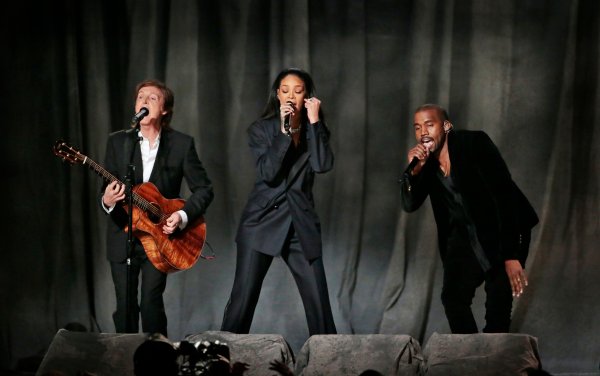 Why Kanye West Is 'a Monster', According to Paul McCartney
Next Up: Editor's Pick