President Obama urged Vietnam’s communist rulers Tuesday to give more freedoms to the country’s people, amid worries his Administration is disregarding serious human-rights issues in favor of geopolitical concerns in its dealings with the leadership.

But his message, delivered at a meeting with members of local civil society, was undermined by the fact that several prominent critics of Vietnam’s government were prevented from attending the event. One Vietnamese lawyer tweeted a photo showing spaces around the table in a room at the U.S. embassy — “Why the empty chairs?” she asked.

Obama said during the meeting that “Vietnam has made remarkable strides in many ways … [but] there are still areas of significant concern,” according to the Associated Press. Upholding human rights was “not a threat to stability, but actually reinforces stability and is the foundation of progress,” he said.

Lawyer Ha Huy Son told Agence France-Presse he was prevented from accessing the U.S. embassy in Hanoi for the meeting. “They said I could go anywhere else but not to the embassy. And they are still following and watching me,” Son said.

Local activists said prominent blogger Pham Doan Trang and Nguyen Quang A, a businessman turned outspoken government critic, were both prevented from attending their appointment with Obama. Anh Chi, an activist and freelance journalist in Hanoi, tells TIME that Quang A was picked up by security officers early in the morning and driven some 40 miles outside of town — without explanation — before being returned to the city at about 1 p.m., after the meeting had finished.

“During [Obama’s] time in Hanoi, we are under tight security. All the activists and writers are monitored,” Anh Chi says. “Yesterday morning, some secret police followed me when I took my son to school.”

Amnesty International says at least six activists, including U.S. citizen Nancy Nguyen, were also detained in the days running up the President’s arrival, which came after the government cracked down on demonstrations earlier this month over the mass deaths of fish along the country’s coast that are thought to have been caused by industrial pollution.

“There’s no mainstream independent media in the country, but Facebook and other social media — when they are not blocked as they have been intermittently in recent days — [are] abuzz with stories of surveillance and intimidation,” says John Coughlan, a researcher on Vietnam for Amnesty International, who is based in London. “Several activists have been beaten and many have had rocks and other items thrown at their homes. It’s full-on and it’s widespread.”

The country held legislative elections Sunday, the day Obama arrived, but all but a handful of the independent candidates hoping to run were prevented from standing. The rest of the candidates were from the Communist Party.

Obama announced Monday that he was lifting an arms embargo against Vietnam, a move widely seen as intended to bolster a country that has opposed China’s expansive claims to the waters, islands and reefs of the South China Sea. Obama left the capital for the southern metropolis of Ho Chi Minh City, formerly Saigon, on Tuesday. 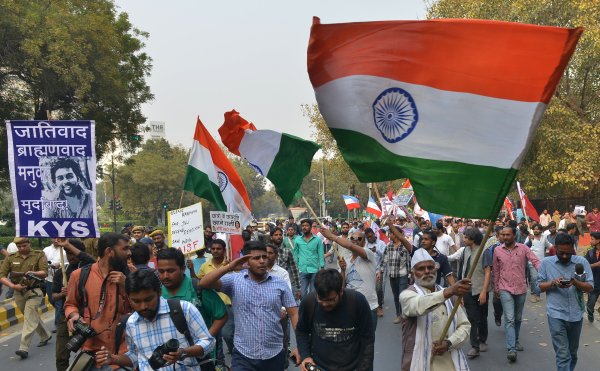 India Should Repeal Laws That Bar Freedom of Speech: Report
Next Up: Editor's Pick