Brazilian Minister Steps Down Over Remarks on Corruption Probe

Brazilian Minister of Planning Romero Juca speaks during a press conference at Planalto Palace in Brasilia, on May 13, 2016
Evaristo Sa—AFP/Getty Images
By Mark Rivett-Carnac

A senior minister in Brazil’s interim government said he would step down Tuesday after being accused of plotting to curb a huge corruption investigation.

Planning Minister Romero Juca was reportedly taped in a “secret” recording saying that a “national pact” was necessary to limit the country’s biggest-ever corruption investigation into the state-owned oil company, Petrobras, according to Reuters. “The government has to be changed in order to stop this bleeding,” Juca is reported to have said in a conversation with a suspect in the investigation, former Senator Sergio Machado.

The recording, which was reported by local newspaper Folha de S. Paulo on Monday, was made before President Dilma Rousseff was suspended on May 12 to face an impeachment trial. Rousseff is accused of financial violations but says she is the “victim of a coup.”

Juca, along with several other ministers, is under investigation in the Petrobras case for alleged bribery, Reuters reports. He is the first to fall since acting President Michel Temer stepped in for Rousseff. Juca denied any wrong doing and said his comments were taken out of context. 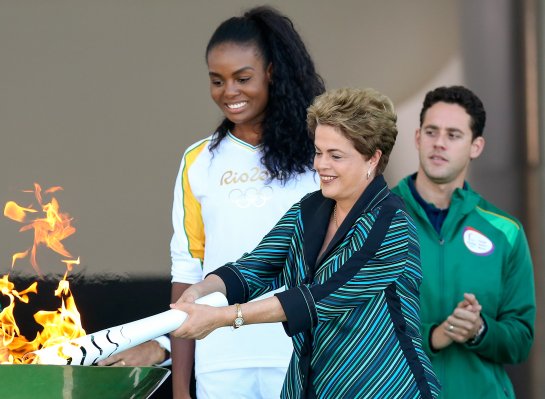 Here's How Brazil's Impeachment Protests Could Impact The Olympics
Next Up: Editor's Pick