Why Lifting the Vietnam Arms Embargo Is All About China

President Obama issued his own Gulf of Tonkin resolution Monday, declaring that his decision to end a 50-year old U.S. arms embargo on Vietnam was “not based on China.” The statement had a whiff of the original 1964 Gulf of Tonkin resolution. That’s when President Lyndon B. Johnson misled the American people and Congress about a naval skirmish to justify a mammoth deployment of U.S. troops into what became the Vietnam War, which eventually killed 58,220 U.S. troops.

In fact, Obama’s decision to “fully” end the arms embargo was driven by China’s growing aggressiveness in seeking control of nearly all of the South China Sea, actions have unnerved Japan, the Philippines, Taiwan—as well as Vietnam and the U.S. “It’s all about China,” says Anthony Zinni, a retired four-star Marine general who fought in Vietnam. “No matter how much he denies it.”

If Obama had linked the embargo’s end to China’s actions, some Pentagon officials believe, it would have signaled to China that its moves have triggered a military reaction. Denying any linkage, they believe, simply delays an inevitable day of reckoning.

Tom Pepinsky, a southeast Asian expert, says lifting the embargo is all about China. “This decision is ultimately driven by regional concerns, with Vietnam emerging as a key strategic partner for the United States,” says the associate professor of government at Cornell University. “Although the Obama Administration denies that continued tensions in the South China Sea are at the heart of its decision to resume arms exports to Vietnam, this decision signals U.S. plans to contain China’s regional ambitions with Vietnam as a partner.”

Obama declared the end of the embargo with Vietnam’s new president, General Tran Dai Quang—former chief of Vietnam’s notorious Ministry of Public Safety—by his side. “The fact that Vietnam’s Politburo chose Quang to be president indicates a great deal about their priorities,” Human Rights Watch said in a letter to Obama last month. Zinni says that the U.S., in its effort to curb China’s expansionist aims, is letting pragmatism trump Hanoi’s horrible human-rights record.

Human Rights Watch recently called Vietnam a “police state,” and Obama said any arms sales to Hanoi would be dependent on an improving human-rights record. Vietnam, whose nearly 2,000-mile coastline is the western rim of the contested South China Sea, would like to check Beijing’s pressure with patrol boats and anti-submarine airplanes. But the sale of more sophisticated U.S. fighter jets, missiles and radars could follow. The U.S. also wants Vietnam to open up the port of Cam Ranh Bay, which served as a key base for the U.S. Navy during the Vietnam War.

Defense Secretary Ash Carter agreed with his boss, although he tossed in a dash of nuance when it came to explaining why the U.S. is lifting the sales ban. “There’s no question that China’s actions [in the South China Sea], particularly those over the past year, have heightened concern in the region, and that’s another factor that causes everyone to want to work with us,” Carter said. More nations in the region “are coming to the United States to do more and more with us because of their general concern with the security environment.” 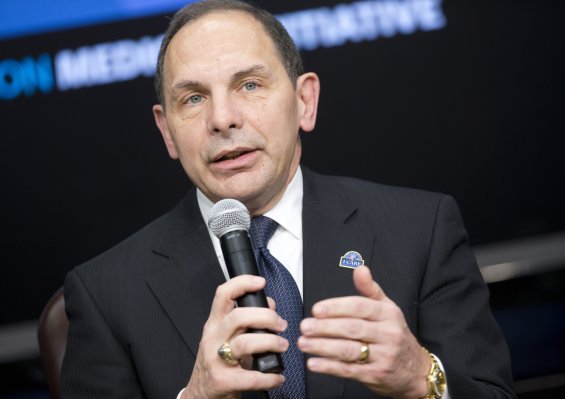 VA Secretary: Wait Time Is Not What's Important
Next Up: Editor's Pick