What We’re Forgetting in the Fight for Gender Equality

Last spring, I went to a dinner party and sat next to a man named Walter Hill. Famous for, among other things, directing the cult-gang movie The Warriors and producing the Alien trilogy, he’s the kind of old-school Hollywood guy who has stories about Dennis Hopper. I think he wore a leather jacket to dinner.

I’ll get to the point: When I mentioned I was also a director, albeit one whose genre is comedy and who at the time had one feature under her belt (not to be a girl and diminish my accomplishments, that just happened to be my resume), he lit up.

We swapped war stories from our respective shoots, then, the next day, he sent me a follow-up email saying he hoped we’d keep in touch and that “directing is a narrow and twisted path, not for the faint of heart…we join the circus willingly. We embrace our fate.”

That dude was awesome.

As a woman in Hollywood, I’ve found myself in the eye of a storm of discourse about Women In Hollywood. There was that feature in the New York Times. There’s a federal investigation. And there are a billion panels and happy hours where women can congregate to bemoan how many jobs we’ve lost to men, how often we’ve been diminished at work…and in my case, that time this studio executive told me all about this actress who wore a lace shirt to a meeting and he could totally see her nipples through it. (I’m not worried he’ll be embarrassed reading this, because there’s no way he’s reading an article about women in Hollywood.)

We leave these events relieved to be heard, and we vow to hire each other. We grab gift bags on our way out. And sometimes, those gift bags contain free Laura Mercier eye shadow, which looks good on everyone.

So why am I writing this piece?

Because I find there’s a disconnect between the general tenor of conversations around Women in Hollywood lately and that dinner-party conversation I had with Walter Hill. One line of discussion focuses on our Otherness and victimhood; the other conversation was about unity and mentorship and passing the torch. And then there’s a third narrative that has barely been acknowledged—about what we might learn from people who have benefitted from privilege and how to form alliances and productive collaborations with them to leverage our own success.

If women truly want to change the game and become real players in Hollywood, we need to do a better job of integrating all these perspectives, of having them all in our arsenal.

One simple way we can start, as a community, is to expand our idea about who is invested in change. The truth is, it’s not just women. As Women in Hollywood trying to get ahead, we primarily gather with other women to talk about our struggles. And while it’s necessary to name our experiences in a safe space with those who speak our language fluently, I have found that the rhetoric of these meet-ups often devolves into hand-wringing and generalizing about gender (and often race and class in the process).

We talk about how “they” have to show us more respect but don’t talk about practical ways to form productive alliances with those who have been empowered by the system. We certainly don’t invite any of “them” to participate to help us strategize from the inside.

The vibe is more of a “let’s storm the gates” battle cry that puts us in opposition to everyone who has privilege—and in so doing, reiterates our place on the outside.

If our goal as women is to get to a place where we get to work the same jobs men do and get paid like they do, at some point we’ll presumably have to peacefully coexist and interact with them as colleagues. It should be a high priority for us to discuss practical strategies for enlisting allies and resolving conflict productively when we inevitably encounter those who are still moored in conscious or unconscious gender bias.

Read more: Lili Taylor: The Most Apt Metaphor for Women in Hollywood

There’s also a lot we can do as individual artists, especially early in our careers, to reach across the gender aisle and empower ourselves—starting with changing our paradigm about mentorship to make it more expansive.

Early on in my career, I found that, whenever someone proposed a mentor for me, it was a woman. Unfortunately, there just haven’t yet been many women who have made it as big-budget comedy directors in the studio system, which is the career I want. So while the older female directors I met were brilliant, helpful and supportive, their career paths looked quite different from mine.

Meanwhile, my male counterparts, having a much wider pool to draw from in male directors, were able to find mentors whose interests and tastes were totally aligned with theirs. Unsurprisingly, those relationships had more longevity and often resulted in artistic collaborations between them.

Rather than lament the lack of options, let’s stop siloing ourselves. Yes, Hollywood is a boys’ club, but it’s also, more generally, a mentors’ club.

The older generation of established filmmakers has a rich history of grooming the younger generation. They let them apprentice for them and shadow them on set. They executive-produce their first films to give them legitimacy. They’ll make a call to a studio head they’ve known for decades to vouch for a kid they think is talented and help him get that job. Just because most of these 800-pound gorillas don’t know what it’s like to be a woman in Hollywood doesn’t mean they wouldn’t want to help us, too.

At the very least, we should try them. Because I know for me personally, while I may or may not see every Nancy Meyers movie on opening weekend with 10 of my closest friends, my sensibilities as an artist are more aligned with a director like Paul Feig from Bridesmaids. So wouldn’t he make at least as much sense as a potential mentor?

My point being, totally reach out to Nancy Meyers and ask if you can buy her a coffee and pick her brain if you love her movies. But also call Paul Feig. Or Walter Hill. Or whoever is out there doing the work you admire.

Which is not to say that every man cares about being an ally. Some of these old guys who won Oscars back in the day are trapped in “nice legs, babe, get me a coffee ” mode and will die there. And many of them probably have wives who will be wary of them taking some 25-year-old girl who just moved to Hollywood out for a scotch to “give her advice.” In that case, some cocky boy with an annoying web-series is going to get to have that scotch with him and benefit from his wisdom. But that’s O.K.

There are other 800-pound gorillas who will be receptive and helpful and welcoming. (I’ll stop using this gorilla metaphor now. Well, maybe I’ll use it again at the very end.)

Likewise, many of our male contemporaries are more supportive of parity than we give them credit for. Though they benefit from privilege, they didn’t create that system.

Yes, our perspectives will always be gendered, but we should feel equally comfortable describing ourselves both ways and meeting as many people who share our passions as possible. That’s how we’re going to meet our next collaborators. Some may have vaginas, others may not.

And look, on a completely selfish level, here’s the biggest reason to stop vilifying those with privilege: We can learn a lot from them about how confident we need to be to get anywhere in Hollywood.

Because, resent them though we may, it’s a fact that people with privilege carry themselves differently. They just do. That’s what’s so maddening about them. They get to walk into rooms with the confidence of people who have never been told “no”.

They don’t even appreciate how lucky they are not to have that psychic handicap as they move through the world. And that confidence is often a big part of the reason they sell pitches and get jobs. We’re talking about an industry in which success is as much about having proverbial balls as it is about talent.

And it feels totally different to talk shop with people who see their whole careers through that lens—not in terms of barriers but in terms of boundless opportunity. At the end of the day, the content of our ideas will always be uniquely ours and, as such, uniquely female. But it’s not a bad thing for us to appropriate some of their confidence for the presentation of those ideas. Yes, it’s a performance. It’s also how I’ve gotten every major job I’ve had in my career thus far.

Then, in a few years, we can become the gorillas for the next generation (sorry). No, wait, you know what? As a woman, I am not going to apologize for anything. I can talk about gorillas as much as I want.

Susanna Fogel is the writer/director of the feature film Life Partners, an alumna of the Sundance Screenwriters’ Lab, co-creator of the television series Chasing Life and a contributor to the New Yorker. Her first novel will be published by Henry Holt-Macmillan in 2017. 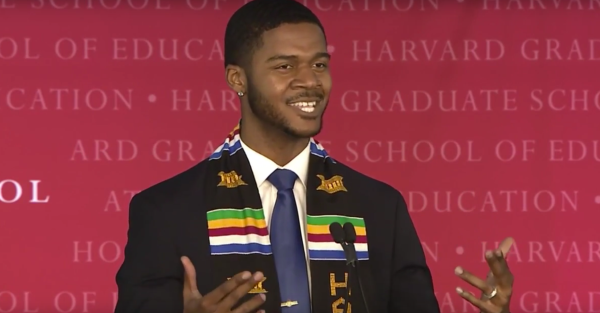 This Harvard Grad Gave a Powerful Speech on Race and Education
Next Up: Editor's Pick