Brexit Would Plunge U.K. Into Year of Recession, Treasury Warns

The U.K. stands to lose over half a million jobs and sink into a deep, year-long recession if it leaves the European Union, according to bleak analysis released on Monday by the country’s finance ministry.

“This is what happens if Britain leaves: the economy shrinks: the value of the pound falls, inflation rises, unemployment rises, real wages are hit, so too are house prices,and as a result – government borrowing goes up,” Chancellor of the Exchequer George Osborne said in a statement. “The central conclusions of today’s Treasury analysis are clear – a vote to leave will push our economy into a recession.”

British Prime Minister David Cameron and Osborne presented the new analysis at a press conference in the coastal city of Southampton, in a bid to convince the electorate to vote to remain within the EU in the June 23 referendum.

The report also states that two years after Britain’s hypothetical exit from the EU, the country’s GDP would contract by 3.6%, house prices would be 10% lower and there would be a steep rise in inflation.

Vote Leave campaigner and Conservative Party politician Iain Duncan Smith said in a Financial Times interview that there is a large margin of error in the analysis: “The Treasury has consistently got its predictions wrong in the past. This Treasury document is not an honest assessment but a deeply biased view of the future and it should not be believed by anyone.” 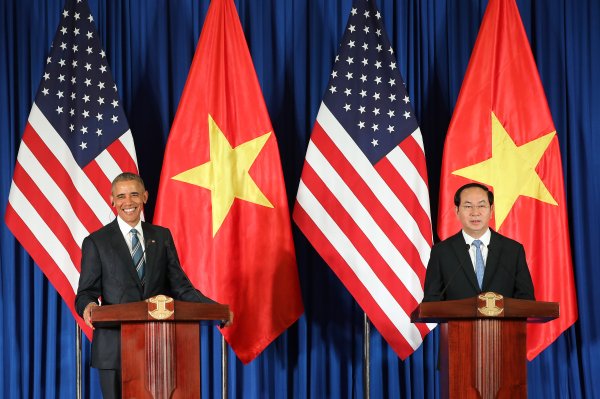 What to Know About Obama's Visits to Vietnam and Japan
Next Up: Editor's Pick