Rihanna, Britney Spears, Madonna and Celine Dion all played the 2016 Billboard Music Awards Sunday night. The remarkable line-up of musical powerhouses made up for the fact that the show was a ludicrous three-and-a-half hours long during which they handed out a paltry seven awards for such dubious accomplishments as Billboard Chart Achievement Award.

Two of the awards were previously announced — Britney Spears collected the Millennium Award and Celine Dion was officially anointed an Icon (as if she wasn’t already). Many awards were handed out off-camera (check the full list here), clearing the schedule for many, many musical performances, including Justin Bieber, Ariane Grande, Ke$ha, and the reunited Go-Gos.

Here are the best and worst moments of the 2016 Billboard Music Awards:

Britney Spears: For those who haven’t made it to Vegas to see Britney Spears’ ongoing residency, the pop queen gave the audience plenty of reasons to book a ticket to Sin City. She opened the show, starting with “Work Bitch” and worked her way through her songbook. She hit the stage clad in a bejeweled bikini that would make Teela and Madonna proud, paired with knee high Wonder Woman boots and wrist bands. She owned the stage with her biggest hits, including “Womanizer,” a cover of Joan Jett’s “I Love Rock ‘n’ Roll,” followed by the deep cut “Breathe on Me,” and earned the biggest roars with “Slave 4 U” and “Toxic.” Of course, Spears was not just on hand to wow the masses with her medley, but also to receive the Billboard Millennium Award, which Billboard says is intended to “honor artists with exceptional achievements and influence in the music industry,” but is really just to give us all an excuse to bask in the glory of Britney.

Ke$ha: After several rounds of will-she-won’t-she played out in headlines around the world, Ke$ha appeared on stage (dressed a little like Colonel Sanders in a white suit and black string tie) to perform Bob Dylan’s “It Aint Me, Babe” with Ben Folds. They turned the track into a slinky Adele-esque number and the audience was appropriately respectful of the embattled artist.

Rihanna: Performing her song “Love on the Brain” on a surprisingly bare bones set, Rihanna delivered a memorable performance without any bells or whistles (or confetti or fire). That’s how it’s done, people.

Celine Dion: The chanteuse came to collect her Icon Award, proving her status with an impressive performance followed by a tear-filled speech on the arm of her son. There was hardly a dry eye in the house when she lifted her statuette in the air and declared, “The show must go on!”

Ariana Grande: The upstart singer elbowed her way into the hallowed ground of Madonna, Rihanna, Celine Dion and Britney Spears and proved she belonged there with her dazzling performance of “Dangerous Woman.” Ariana Grande is clearly hear to stay, and could easily be back on stage in 20 years to collect her own Millennium Award.

Shawn Mendes: The Vine star — with some 4.3 million followers — who was featured as one of TIME’s Most Influential Teens of 2015 stopped by to perform his hit “Stitches.” The versatile artist switched from acoustic guitar to piano in the middle of the song, deftly showing off Mendes’ vocal skills and musical talent, as he made it rain on stage thanks to a water-logged backdrop.

Justin Bieber: The Biebs was booed last time he was on stage at the Billboard Music Awards, but he has grown and changed since then — and so has the audience. The crowd started screaming the moment that Snapchat star DJ Khaled introduced Bieber and they didn’t stop during his performance of “Sorry” and “Company.”

Troye Sivan: Teen dream Troye Sivan did a sponsored performance for a car company that still managed to be more emotional and engaging than half of the other artists performing on the show.

The Go Gos: Before they hit the road on their simultaneous reunion/farewell tour the pioneering ’80s outfit hit the stage to perform their song, “We Got The Beat.” The older members of the audience were giddily singing along to the classic tune — and those who were too young to know it from its radio days, gamely clapped along anyway.

Kristen Bell, Kathryn Hahn, and Mila Kunis: The three actresses stopped by the awards show just long enough to introduce P!nk and plug their film Bad Moms, but in a fair and just world they would have sent Ludacris home and hosted the entire show themselves.

Madonna: The Queen fittingly opened her Prince tribute with some fiery licks of “Let’s Go Crazy” followed by a cover of “Nothing Compares 2 U.” For the set, Madonna sat in a purple throne and wore a purple glitter suit that could have been swiped from Prince’s tour wardrobe. A string quartet accompanied her as photos of Prince flashed in the background. The song was good, but felt like a funeral straight out of Empire more than a solemn and touching — or particularly memorable – memorial. That all changed with Stevie Wonder came out to help her lead a singalong to “Purple Rain” and the audience, including Rihanna and The Weeknd, held their purple glow sticks aloft, and sang to close out the show

The Hosting: Ludacris spent most of the evening objectifying Ciara and making jokes about “threesomes that he’s all about.” Ciara spent every commercial break changing her clothes (there were at least 8 or 9 dresses); Ashton Kutcher was introduced as the star of “television comedy The Ranch”; The Bachelorette’s Jo Jo Fletcher made her Billboard Awards debut; Shark Tank star Mark Cuban showed up on stage in a Henley shirt and the audience was forced to endure banter about whether he was going to run for President.

Pink: In case you forgot that Pink is an aerialist (which she showed off at the 2010 and 2014 Grammy Awards) and likes to burn down the stage (like she did at the 2012 American Music Awards), she did it all again for her new song, “Just Like Fire” from the Alice Through the Looking Glass soundtrack. Love you, Pink, but it might be time to shake things up on stage.

Lukas Graham: The Danish group delivered a very understated performance of their hit “7 Years.” They were clearly aiming for “soulful” but ended up at “snooze.” Not helping the situation was the fact that the audience surrounding the stage looked like they had been prompted to dance, but kept forgetting to move.

Nick Jonas and Demi Lovato: Nick Jonas performed “Close” with Swedish star Tove Lo (who apparently got the memo that women weren’t allowed to wear full-length trousers on the show), but it was weirdly truncated as they had to split the time slot with Demi Lovato to promote their upcoming co-headlining tour. Lovato’s “Cool For The Summer” is undeniably catchy — and wearing an inclusive t-shirt was a nice touch — but the performances fell a little flat in comparison to some of the others.

DNCE: The best part about DNCE’s performance was Nick Jonas proudly recording (Periscoping? Snapchatting?) his brother Joe’s performance. The band managed to get the audience on their feet and waving their arms in the air (but it may have been just to get the confetti out of their eyes.) There is almost no chance anyone will remember this set next year (or next month) except for the Jonas brothers’ parents.

Fifth Harmony: For the evening’s first collaboration, Fifth Harmony teamed up with Ty Dolla $ign, who made the easiest paycheck of his career by singing three lines with the group. The performances were fine, but it was not particularly memorable and when you’re playing on the same bill as Madonna, Rihanna, and Celine Dion you have to bring your A-game. 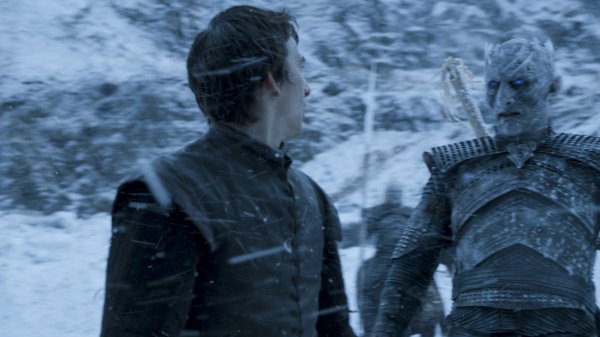 Everything We Know About the White Walkers on 'Game of Thrones<'
Next Up: Editor's Pick