When you’ve got an itch, you scratch it. That urge is often caused by an irritation, which is how China and Russia perceive recent U.S. military moves in their neighborhoods. That’s what accounts for a flurry of dangerous fly-bys of U.S. warplanes and ships by Beijing’s and Moscow’s aircraft. But figuring out the root motive—and even who’s in the right—is a little more complicated.

The question looms large this week as President Obama visits Japan and Vietnam, two nations concerned about neighboring China’s territorial expansion into the East and South China Seas. Last week, a pair of Chinese J-11 fighter jets flew within 50 feet of a U.S. Navy EP-3 reconnaissance plane as it cruised over the South China Sea, where China has been enlarging reefs and building airstrips on them.

The Pentagon disputed the charge the same day. “My understanding is this happened in international airspace over the South China Sea,” Pentagon spokesman Peter Cook said of the May 17 incident. “And we have continued to fly, sail and operate wherever international law allows.”

There has been a spate of similar close calls involving Russian aircraft over the past year, as Russian President Vladimir Putin has seized land from neighboring Ukraine and upset his European neighbors with saber-rattling. On April 14, an Su-27 fighter flew a barrel roll (think of it as a horizontal corkscrew) within 25 feet of a U.S. Air Force RC-135 reconnaissance plane over the Baltic Sea, according to the Pentagon. Russian Su-24 fighters buzzed the USS Donald Cook April 11 and 12 over the same sea, with one of them coming within 75 feet of the guided-missile destroyer.

“We have deep concerns about the unsafe and unprofessional Russian flight maneuvers,” the U.S. Navy said after the Cook fly-bys. “These actions have the potential to unnecessarily escalate tensions between countries and could result in a miscalculation or accident that could cause serious injury or death.”

Aerial chicken is unnerving, especially between nuclear-armed powers. Some experts see it as international business as usual, while others view it as evidence that foreign powers feel free to push the U.S. around. “Expect more of this behavior until Inauguration Day 2017,” says David Deptula, a retired Air Force lieutenant general who planned the 1991 air war against Iraq and commanded the air strikes against Afghanistan following the 9/11 attacks.

“Putin has, at best, a pair of 10s in hand, but he knows President Obama will fold at the show of any strength,” says Deptula, who has flown more than 400 hours in combat, mostly aboard F-15 fighters. “Same with [Chinese President] Xi Jinping. It’s basic bully psychology: as long as there is no push-back the bully will continue to push the weakling around.”

Anthony Cordesman, a military scholar at the Center for Strategic and International Studies, sees it differently, calling the surge in such aerial hot-dogging “purely coincidental.” It’s part of the standard ebb and flow between international rivals, he says, and something that happened even more often between the U.S. and the Soviet Union during the Cold War

Trying to keep a lid on tensions, there are always suggestions that pilots engaging in such risky actions are doing so on their own, without official blessing. Cordesman doesn’t buy it. “Ultimately, if you do something like this on your own,” he says, “you are likely to have a really bad year when you get back to base.”

The U.S. doesn’t engage is such shenanigans, Deptula says. “U.S. military pilots do not act in the reckless and unprofessional manner in which both Russian and Chinese pilots are behaving in recent encounters with U.S. ships and aircraft operating in international spaces,” he says. “U.S. military personnel intercept other nations aircraft in accordance with the rules of the International Civil Aviation Organization.”

But that may depend on one’s definition of “international spaces.” While the U.S. claims these encounters are happening in international airspace, or outside territorial waters, it’s not always seen that way by the other side. “From their viewpoint, we are in the wrong,” Cordesman says. The resulting fly-bys represent a “shot across the bow,” he adds, warning the U.S. to keep its distance.

Such maneuvers tend to involve lumbering U.S. spy planes, like the EP-3 or RC-135, being challenged by faster and more nimble foreign fighters. “Countries do it because it sends a very clear signal of risk,” Cordesman says. “The worst that can happen is a collision that you can afford and which the other country has to accept.”

The point of razor-close fly-bys or barrel rolls is to make sure the message is delivered. “It is precisely this kind of activity that sends a truly drastic signal,” Cordesman says. “To say it’s unsuitable because it lacks military dignity is a bit of an oxymoron.”

The Navy is rushing development of a camera pod it can fit on its surveillance aircraft to snap proof of such dangerous encounters. While such planes are already crammed with cameras, they’re designed to scan and photograph land and sea far below, not aircraft brushbacks.

What’s surprising is that they don’t have them already. After all, it was 15 years ago last month that a Chinese J-8 fighter collided with a U.S. Navy EP-3. The crash killed the Chinese pilot and forced the U.S. plane to land on China’s heavily-defended Hainan Island, where its crew was held for 11 days. The Chinese pilot, U.S. officials said at the time, reveled in risky behavior, coming as close as 10 feet to U.S. military aircraft during previous encounters. That 2001 crash—in which the 24 Americans came close to dying—occurred not far from last week’s close call. Next time, they may not be so lucky. 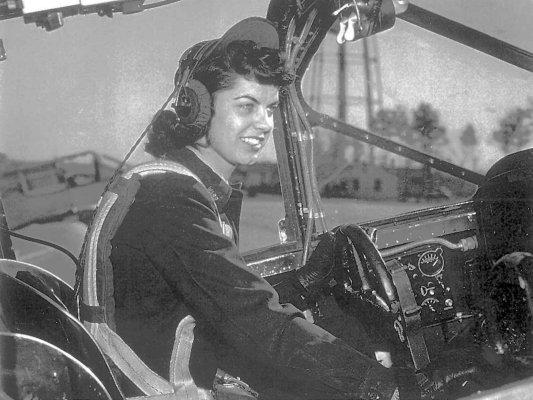 Female World War II Pilots Can Now Have Their Ashes at Arlington National Cemetery
Next Up: Editor's Pick