Taliban leader Mullah Akhtar Mansour has been killed in a U.S. drone strike in Pakistan, according to both Afghanistan’s spy agency and the country’s chief executive.

One of the militant group’s senior commanders also told the Associated Press news agency that Mansour had died in “the Afghanistan-Pakistan border area” after he was targeted by an unmanned American drone. The mission, which was confirmed by U.S. officials, was authorized by President Barack Obama.

Although some Taliban officials disputed the claim, Afghanistan’s chief executive, Abdullah Abdullah, said the Taliban leader died when his car was attacked by a U.S. drone:

In a statement Saturday, Pentagon press secretary Peter Cook said Mansour had been “actively involved with planning attacks against facilities in Kabul and across Afghanistan, presenting a threat to Afghan civilians and security forces, our personnel and coalition partners.” “Mansour has been an obstacle to peace and reconciliation between the government of Afghanistan and the Taliban, prohibiting Taliban leaders from participating in peace talks with the Afghan government that could lead to an end to the conflict,” he said. At the time, Cook did not confirm Mansour’s death, saying, “We are still assessing the results of the strike and will provide more information as it becomes available.”

Commenting on the air strike, U.S. Secretary of State John Kerry said Mansour posed a “continuing imminent threat” to American personnel in Afghanistan. “Peace is what we want. Mansour was a threat to that effort and to bringing an end to the violence and suffering people of Afghanistan have endured for so many years now,” he said at a news conference during a visit to Myanmar on Sunday.

The strike is a reminder of the continuing turmoil in Afghanistan, even as the U.S. military focuses on combatting the threat from the fighters of ISIS in Iraq and Syria. It could also set off a fresh round of infighting in the Taliban, which, after recent advances, now controls more Afghan territory than at any time since the 2001 American invasion of the country.

Mansour formally took charge of the militant group last year, when it emerged that the Taliban’s longtime leader Mullah Mohammad Omar had died in Pakistan in April 2013. Omar’s death had been reported several times in the past, with the whereabouts of the reclusive one-eyed leader shrouded in mystery ever since he disappeared from public view in the aftermath of the U.S.-led invasion of the country. Confirmation of Omar’s death at the end of July 2015 touched off a leadership battle inside the group, as various factions staked their claim to lead the violent insurgency. It was only in September that the Taliban announced an end to the leadership struggle, after Omar’s relatives pledged their allegiance to Mansour, a longtime Taliban operative who fought against Soviet troops in the country in the ’80s.

In the late ’90s, when the Taliban ruled from the Afghan capital, Kabul, Mansour was largely unknown to the outside world, put in charge by the group’s leadership of civil aviation and tourism at a time when there was little in the way of tourist or air traffic in the conflict-ridden country. After the Taliban was driven from Kabul in 2001, Mansour relocated to Pakistan. In subsequent years, as the Taliban mounted an increasingly bloody assault against international troops and Afghanistan’s foreign-backed government, Mansour slowly rose up the group’s ranks, eventually emerging as the Taliban’s acting head in the two years during which Omar’s death was kept secret. It is Mansour who is believed to have authorized the release of periodic statements in Omar’s name during that time — a ploy to maintain the fiction of his leadership, even as Mansour ran the show behind the scenes.

Suspected to have close links to Pakistan’s intelligence establishment, Mansour was initially seen as a relative moderate and pragmatist who favored peace talks between the militant group and the Afghan government and its international partners. His short tenure at the head of the group, however, was characterized by increased violence as the Taliban refused to come to the negotiating table. Instead, just weeks after resolving the leadership rift inside the group, Mansour directed a violent headline-grabbing raid on the Afghan city of Kunduz, the Taliban’s last stronghold before it was ejected from power in Kabul. Although brief, the capture of Kunduz at the end of September helped cement Mansour’s power at the top of the militant group. In recent months, Taliban fighters have continued to wage a violent battle to extend their influence in the country, putting increasing pressure on Afghan forces as they attempt to gain control of the southern Helmand province. Earlier this month, as the group stepped up its attacks near the provincial capital of Lashkar Gah, a local leader told the Reuters news agency that the “threat is becoming bigger minute by minute. If the government does not take action soon, we will witness the collapse of Lashkar Gah.”

With Mansour’s death, attention is now likely to turn on his most prominent deputy in the Taliban hierarchy, Sirajuddin Haqqani, the leader of the feared Haqqani network which has long been suspected to have the backing of elements within the Pakistani establishment, a claim Islamabad denies. Designated as a foreign terrorist organization by the U.S. government in 2012, Haqqani’s group has been blamed for some of the most high-profile and deadly attacks during the Afghan insurgency, including a Kabul car bomb last month that killed 64 people.

“The prospect of the Haqqani Network taking formal control of the Taliban would be a nightmare scenario for the U.S.,” Michael Kugelman, a senior analyst who tracks South and Southeast Asia at the Wilson Center in Washington, D.C., tells TIME.

But his elevation is not guaranteed, he added. “I imagine there will be a long, ugly, drawn-out succession battle, and especially because unlike with the case of Mullah Omar, the loss of Mansour was sudden and unexpected. In a fragmented organization like the Taliban, there are no clear-cut successors and there is no clear-cut process to select one.”

“The other possibility is that the various Taliban factions would unite around their martyred leader and band together to select a successor. The problem is that Mansour never had the unifying power of Mullah Omar. In all likelihood, the Taliban faces another bruising leadership transition process.” 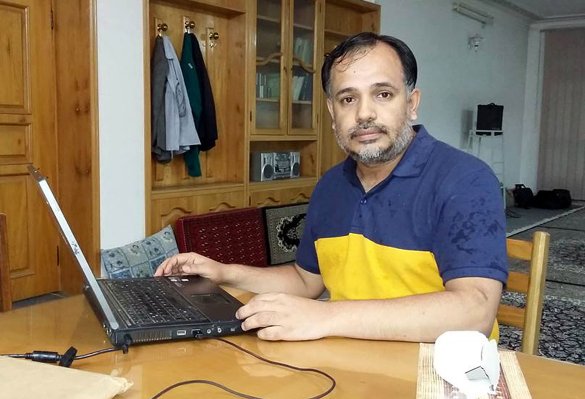 Pakistani Activist Gunned Down in Karachi
Next Up: Editor's Pick