CLEVELAND, OH - MAY 19: Kevin Love #0 of the Cleveland Cavaliers reacts during the second half against the Toronto Raptors during the 2016 NBA Playoffs (Photo by Jamie Sabau/Getty Images)
Jamie Sabau—Getty Images
By Cady Lang

It looks like the Cleveland Cavaliers‘ playoffs sweep has left them with lots of spare time on their hands. At least that’s the case for Cavs player Richard Jefferson, who is the mastermind behind “Lil’ Kev,” a mascot of sort for the team.

It all began when Jefferson saw a Tommy Bahama ad of a model that bore an uncanny resemblance to the Cavs’ very attractive Kevin Love. Jefferson ripped out the ad and christened it, “Lil Kev.” (The name is inspired by Love’s “The Hoopers” State Farm commercials, where Love plays a pre-pubescent boy.)

Jefferson described the alter ego in so many words to ESPN.com: “Lil’ Kev, man, he’s a wild one. He’s a wild one. Everybody’s got like, alter egos. You’ve got Kobe [Bryant]; he’s the Black Mamba. You got [Michael] Jordan; obviously Air Jordan. You got LeBron [James]; and you got King James. So, you know, you got Kev [Kevin Love] and you got Lil’ Kev.”

It also looks like Lil’ Kev is moving into personalized merchandise, if J.R. Smith’s shirt at practice was any indication.

Lil’ Kev even has his own verified Instagram account now, which the NBA gave a shout out to on Thursday.

No official word from Kevin Love on how he feels about his doppleganger’s mug taking over the Cavs’ playoffs journey, but we’d wager a guess that he’s just happy to finally be pseudo-making it into his teammate’s pics. 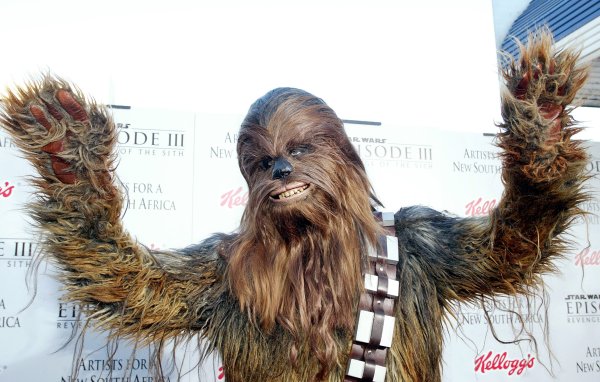 May We All Be as Happy as This Woman and Her Chewbacca Mask
Next Up: Editor's Pick