Donald Trump speaks at a fundraising event in Lawrenceville, New Jersey on May 19, 2016.
Eduardo Munoz Alvarez—AFP/Getty Images
By Elizabeth Dias

Top evangelical and social conservative leaders are planning a private meeting with Donald Trump to see if they will be able to address longstanding concern about his candidacy.

Former presidential candidate Ben Carson is working with Tony Perkins, president of the Family Research Council, and Bill Dallas, who leads United in Purpose, to plan a closed-door session for about 400 social conservative leaders to meet with Trump in the coming weeks in New York City. A broader steering group of about 20 people includes people like American Values president Gary Bauer, Focus on the Family founder James Dobson, and Family Leader president Bob Vander Plaats.

“We are looking for a way forward,” Perkins says. “The main thing here is this is to have a conversation.” He described the planned meeting as “a starting point for many.” The Trump campaign has not publicly confirmed that the meeting will take place.

For many of the expected attendees at the event, Trump was not their first choice as a presidential candidates. With the exception of Carson, who has endorsed Trump, the event organizers were not supportive of Trump in the primary, says Perkins, who supported Sen. Ted Cruz. The event is expected to be a closed-door interactive forum for attendees to ask questions of the candidate, likely in an interview format, not prepared speeches. This event is also not intended to focus on rolling out endorsements. “I don’t even know what it will lead to,” Perkins says. “It is just to have an honest conversation so that these leaders know what they need to do.”

Trump campaign surrogates are separately organizing a more official faith advisory committee for the candidate, with Mike Huckabee being discussed as a possible national chairman. Televangelist Paula White, a Trump supporter and a senior pastor of New Destiny Christian Center in Florida, have been organizing the group behind-the-scenes with Tim Clinton, president of the 50,000-member American Association of Christian Counselors, according to several people familiar with the project.

Trump’s team meanwhile announced Wednesday that he would send a video message to a conference of Latino evangelical leaders this weekend in Anaheim, organized by Samuel Rodriguez Jr., the president of the National Hispanic Christian Leadership Conference. Hillary Clinton is also sending a video message.

All of these moves signal an attempt to unite a social conservative base that has been deeply fractured over the presumptive GOP nominee. Both the campaign and the constituents groups are testing whether Trump can win their support despite division in the primary—especially over Trump’s public refusal to ask for forgiveness, his past support for abortion, and his harsh rhetoric about women and non-whites, all things that have left leaders of many large coalitions in the lurch.

The day after Trump became the presumptive nominee, for example, the lay Catholic organization Catholic Vote—one of United in Purpose’s partners—called Trump too “problematic in too many ways” to receive their endorsement, citing concerns over his moral judgment, his past support for abortion, and his lack of “foundational principles from which he proposes to govern.” The group said it would “not necessarily” work actively to defeat Trump, but would turn its resources to critical Senate and House seats.

That is an issue Carson hopes to address with social conservatives. “Donald Trump is pro-life,” Carson says of these types of concerns. “Now he might not be quite as pro-life as I am, but he definitely believes in the sanctity of life, does not believe in abortion on demand. That is a misconception that people have.”

Carson is facilitating the gathering as the chairman of MyFaithVotes, a nonpartisan effort to mobilize 25 million Christian voters this election cycle. Invitations to the meeting are being organized by Perkins, the founder of the MyFaithVotes initiative Sealy Yates, and Dallas of United in Purpose, a 501c4 that helps conservative groups change American culture toward Judeo-Christian principles. United in Purpose has previously worked closely with Perkins, and has several dozen partners, including groups like Americans United for Life, Concerned Women for America, Catholic Vote, and the Faith and Freedom Coalition.

The ideal event, says Carson, would be “very similar to what happened a couple of weeks ago with Mr. Trump and people on Capitol Hill, getting an opportunity really to sit down face to face and interact with each other, and that allays a lot of anxiety on both sides.”

Ronnie Floyd, president of the Southern Baptist Convention, says Perkins has invited him to the meeting. The purpose is to have a conversation with Trump, says Floyd, “to get to know him, and for him to get to know us…who we are and what we care about.” For Floyd, that includes Trump’s positions on Supreme Court nominations, abortion and racial justice, and religious liberty.

Until now, Trump has largely skirted the traditional evangelical political apparatus in Washington, instead relying on unusual surrogates like televangelists to support his message among evangelicals. Whereas Jeb Bush approached Floyd, the Southern Baptist president, to meet last August, and Cruz visited Floyd’s church and met with him after the service, neither Trump nor his campaign has not reached out to Floyd. “As president of the Southern Baptist Convention, I feel like if they had done their homework in relationship to evangelical leaders, sooner or later, that I might receive a call from them, but I have not received that yet,” Floyd says of Trump’s team.

Several other social conservative leaders interviewed by TIME said they are just in the beginning stages of reaching out to the Trump campaign.

Penny Nance, president of the Concerned Women for America, says a campaign surrogate reached out in January to offer a group meeting with Trump. When Nance said she would only go if it were a substantive policy conversation, she said they were no longer interested, and they did not accept her offer for her to gather a team to really brief him on pro-life issues. CWA has half a million members, a cohort of Republican women with a reliable ground operation. “This is my fear, I work to get my members to, first to go vote, and I urge everyone to do the things that we do to get our favorite candidates to get elected, and all the hours and effort and money that people pour into these candidates, and then you wake up the next morning and realize it was all a ruse,” Nance says. “I did everything I could do to blow up the tracks in front of the Trump train, and it didn’t work, and so at this point you either jump on, or stand on the sidelines and wave.”

Tom McClusky, vice president of March for Life Action, says “there’s a lot of concern” in the pro-life movement now that Trump is the likely GOP nominee. In late April, Trump said he would add new exceptions to the Republican platform on abortion for rape, incest and life of the mother, raising big red flags for pro-life leaders. Lila Rose, president of the prolife educational nonprofit Live Action, called on him to not “dilute” the platform. Their fear with Trump is more than about just abortion. “Our theme for the March this year is that pro-life and pro-women go hand in hand,” McClusky says. “Some of his statements have been, to put it mildly, misogynist.”

Chad Connelly, RNC’s first-ever director of faith engagement, says he has not yet talked with Trump, and has had only limited interaction with Trump’s team. He is working a turnout operation on his own, a heavy lift given the presumptive nominee’s lack of evangelical strategy thus far. Connelly has so far visited 40 states, and has hired some part-time pastors that help in some states, focusing in Florida and Ohio. “I think our segment is the key this fall,” he says. “It is the key.”

Others like Ralph Reed, leader of the Faith & Freedom Coalition and a former senior advisor for the Bush-Cheney campaigns, are getting behind the presumptive nominee. Reed was neutral in the primaries, and now tells TIME that he will personally support Trump and do everything he can in his personal capacity to help Trump’s campaign in the general.

Reed is planning for 2016 to be the largest voter education program of his career. His team will make 200 million voter contacts, directed at 32.1 million faith-based voters primarily in battleground states like Iowa, Florida, North Carolina, Virginia, Colorado, and Ohio. His voter education program budget is projected for $28 million, and will include one million door knocks, 25 million pieces of mail, and on average 7 digital messaging impressions per voter. Operations like this are often the lifeblood for a successful voter outreach—in 2014, Reed’s 30-second videos earned an 80% completion watch rate.

David Lane of the American Renewal Project is planning a prayer rally in Cleveland the weekend before the Republican Convention begins. “I’m going to choose to believe that Donald Trump can be one of the top 4 presidents in American history,” he recently wrote to his followers. “We intend Evangelical and Pro-Life Catholic Christians to bring biblical-based values to the public square, bucking up a Trump Administration willing to confront totalitarian ‘Political Correctness.’” 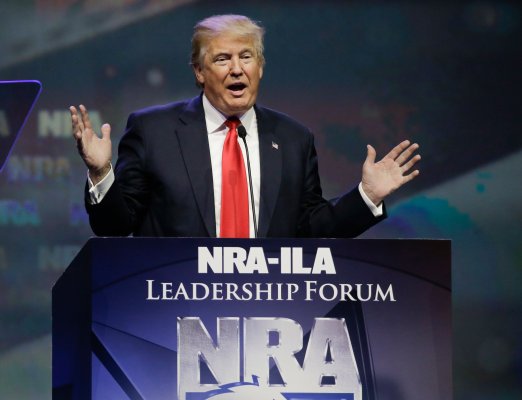