Trump Strikes Back at Clinton After Being Called Unfit for Office

Republican presidential candidate Donald Trump speaks during a campaign rally at the Indiana Theater in Terre Haute, Ind., on May 1, 2016.
Seth Perlman—AP
By Tessa Berenson

Donald Trump struck back at Hillary Clinton Thursday after she said he’s “not qualified” to be president.

“The fact that Hillary thinks the temporary Muslim ban, which she calls the “Muslim ban”, promotes terrorism, proves Bernie Sanders was correct when he said she is not qualified to be President,” Trump said in a statement. (In her interview yesterday, former Secretary of State Clinton said Trump’s proposed ban on Muslims entering the United States made him “essentially being used as a recruiter for more people to join the cause of terrorism.”)

“Look at the carnage all over the world including the World Trade Center, San Bernardino, Paris, the USS Cole, Brussels and an unlimited number of other places. She and our totally ignorant President won’t even use the term Radical Islamic Terrorism,” Trump’s statement continues. “And by the way, ask Hillary who blew up the plane last night – another terrible, but preventable tragedy. She has bad judgement and is unfit to serve as President at this delicate and difficult time in our country’s history.”

The two candidates continued sniping at each other on Twitter Wednesday morning, gearing up for a contentious general election with Trump as the presumptive Republican nominee and Clinton as the likely Democratic victor: 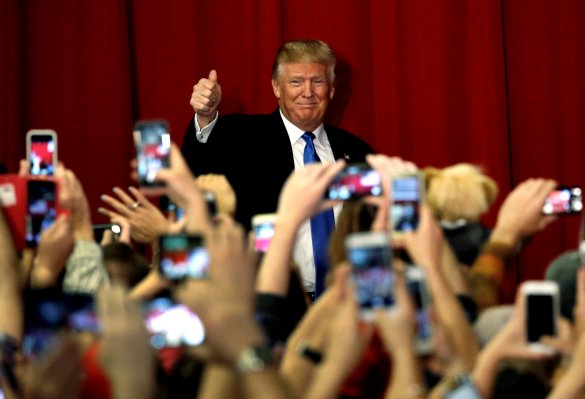 Trump: 'Who The Hell Cares About a Trade War?'
Next Up: Editor's Pick