Hillary Clinton: Donald Trump Is Not Qualified to Be President

Hillary Clinton said Thursday that presumptive Republican nominee Donald Trump’s “divisive and dangerous” behavior is a telltale sign that he’s not qualified to be president.

Speaking with CNN on Thursday, the Democratic front-runner went on the offensive against Trump, who has gone after her — and her husband former president Bill Clinton — hard in recent weeks.

“I know how hard this job is, and I know that we need steadiness as well as strength and smarts in it, and I have concluded he is not qualified to be president of the United States,” Clinton told CNN.

Clinton pointed to Trump’s boisterous rhetoric, including his barbs towards the Mayor of London, as adding up to “a very troubling picture.” She was also critical of the billionaire’s proposal to ban Muslims from entering the United States, saying that Trump was “essentially being used as a recruiter for more people to join the cause of terrorism.”

While she may face Trump in November’s general election, Clinton still has to get past her Democratic opponent Vermont Sen. Bernie Sanders, who has vowed to stay in the race until the Democratic National Convention in July.

Clinton assured CNN’s Chris Cuomo that she would be the party’s presidential nominee, but asserted that Sanders needs to “do his part” to unify the party, later pointing to her role in bringing together Democrats to vote for Barack Obama after she lost the 2008 nominating contest.

“That’s why the lesson of 2008 — which was a hard-fought primary, if you remember — is so pertinent here. Because I did my part, but so did [then-]Sen. Obama,” she said. 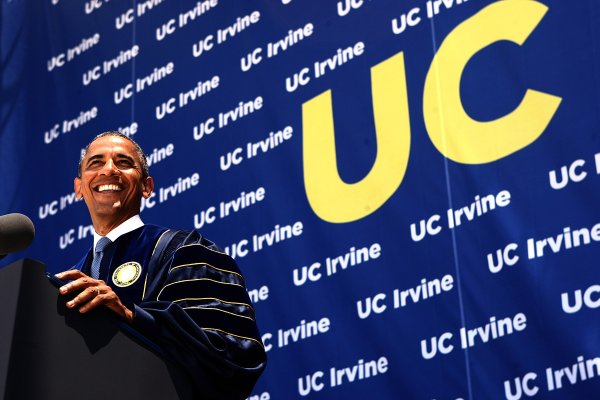 Read President Obama's Commencement Address at University of California-Irvine
Next Up: Editor's Pick