Thais Show Their Love for Soccer Champions Leicester in Bangkok

Thailand rolled out the red carpet—though perhaps a better color would be royal blue—for the players and staff of Leicester City, the newly crowned champions of English soccer.

In an open-top bus tour of the Thai capital, Bangkok, on a baking hot Thursday evening, tens of thousands of people waited patiently in the heavy air for a passing glimpse of the country’s new heroes, the conquering team owned by the Thai company King Power. Police closed roads in the bustling city center to allow an open-top bus—an old London double-decker—to squeeze through the throngs of emotional crowds.

Read More: All the Emotions of Leicester Winning the Premier League, as Shown By 3 Guys in a Pub

At times the Leicester players looked startled by the outpouring; at other moments amused. The faces of goalkeeper Kasper Schmeichel and manager Claudio Ranieri looked particularly amazed. For this is “Amazing Thailand”, as the travel slogan goes, and what would pass in other cities as chaos, calamity or civil strife, in Bangkok just feels like another day.

Noise levels reached fever pitch as the bus toured past some of the city’s affluent shopping malls, surrounded by teams of screaming teenage girls, fist-pumping lads, babies held on fathers’ shoulders. Like Leicester’s miracle season itself, this was an emotional ride, a cavalcade of acclaim for this team of underdogs that a country on the other side of the world has suddenly adopted.

On the top deck of the bus stood the glittering Premier League Trophy, and beside it the Leicester club chairman, Vichai Srivaddhanaprabha, posed like Leonardo DiCaprio on the bow of the Titanic. The Thai billionaire wai-ed in thanks, smiling beatifically. More than anyone—even more than the players who had led their team to the most improbable championship run in sport’s history—today was his moment in the sun.

The Thai business tycoon has been lauded for his running of the club, and he seems to be genuinely admired and respected by the players and fans alike—something of an anomaly in the world of professional soccer, where chairmen and club owners are frequently reviled as self-motivated tycoons.

Read More: A Buddhist Temple in Bangkok Is Now a Venerated Site for Leicester City Fans

The club chairman is hosting the Leicester players at the Pullman Hotel, which lies within the King Power Center, the centerpiece of his own business fiefdom. King Power owns a near-monopoly on duty-free goods at Bangkok’s two international airports. It is also Leicester’s shirt sponsor and lends its name to the team’s stadium.

Fifty-five year old Busbakovn Samolluck offers a magnificent smile as she tells a reporter that her love affair for Leicester began as soon as she heard it was owned by a Thai person. “They played so well this season. And they are just a small humble team; that’s why I love them.”

Leicester-born Peter Ellis and his wife Susan were on holiday in Thailand when they heard about the visit of the team, which is known affectionately in this country as Jingjawk Siam, meaning “Siamese Foxes”. Speaking to TIME at the King Power Center, where he was waiting in line to buy one of the official new jerseys, the 69-year-old Ellis said that he could not believe his luck to be in Bangkok at the same time this celebration was going on.

“As a lifelong Leicester fan, I have watched the team through years of disappointment, including losing cup finals in 1961, 63 and 69,” he told TIME. “I just never believed this [winning the league] was ever going to happen.”

Outside in the street, two young Thai women, Salila and Poonsuk, say they are waiting for the chance to see Christian Fuchs, the club’s star left back, “because he is so handsome,” they giggle. (They add that the Danish goalkeeper Schmeichel runs a close second.)

The waving, smiling, screaming, photo-snapping Bangkok pedestrians were not a far cry from the jubilant scenes the Leicester players witnessed on May 16, when they held a victory parade in Leicester in front of a quarter million revelers.

Speaking at a press conference yesterday at the King Power Center, team chairman Vichai said he had two dreams: to see Leicester “stay at the top”; and for Thailand to qualify for the World Cup. The latter is a tall order: the Thai national team has made it to the final stage of the Asian qualifiers, but faces an uphill task in a group that includes Japan, Australia and Saudi Arabia.

As for the Siamese Foxes, the Premier League Trophy will remain in their hands—and the hands of their proud Thai chairman—for at least another year. 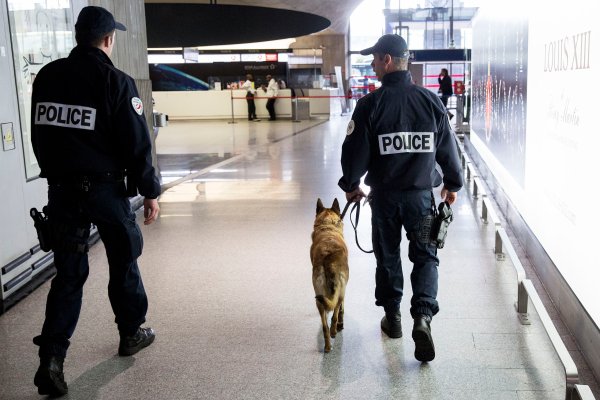 Airport Workers in the Spotlight After EgyptAir Crash
Next Up: Editor's Pick