The buildup of Fiery Cross Reef is shown from May 31, 2014, to May 1, 2016
Photos by DigitalGlobe/ScapeWare3d/Getty Images, GIF by Andrew Katz for TIME
By Hannah Beech

China’s construction workers are legendary for their productivity, assembling everything from modern metropolises to that ancient feat of engineering known as the Great Wall. Now, new satellite imagery from DigitalGlobe shows another locus of Chinese industriousness: the contested waters of the South China Sea.

Over the past couple years, Chinese dredgers have transformed spare reefs and rocks in the disputed Spratly archipelago into islands large enough to boast sports fields and airplane runways. For example, Fiery Cross Reef, once just a couple rocks jutting out at high tide, has grown into a 665-acre island with dozens of structures and a 3 km (1.9 mile) runway that can accommodate military jets.

A harbor big enough for military tankers to berth is under construction. Within the past nine months, Chinese building crews have outfitted the former watery shoal with a running track, basketball courts and tennis courts, according to images captured by DigitalGlobe.

Mischief Reef, another one of the seven artificial islands constructed by Chinese engineers in the Spratlys, now also hosts extensive sports facilities among its roughly 1,400 acres of reclaimed land.

The bits of land scattered across the South China Sea are tiny but ownership claims over them are intense. Six governments—that of China, Taiwan, Vietnam, the Philippines, Malaysia and Brunei—have competing claims over the vital waterway through which more than $5 trillion of trade passes each year.

China demarcates its maps with a nine-dash line that scoops out nearly the entire sea for itself. Most of the territory Beijing controls in the South China Sea was once limited to sandbars or chunks of reef that barely qualified as islands, much less places fit for human habitation. But Chinese urban planning has reshaped the South China Sea. (See the excellent Island Tracker resource at the Asia Maritime Transparency Initiative website run by the Center for Strategic and International Studies in Washington.)

A satellite image of Mischief Reef captured on May 1, 2016, shows a running track, basketball courts and tennis courts.
DigitalGlobe/ScapeWare3d/Getty Images

While other claimants have also built up some of the outcroppings they occupy, China’s efforts have dwarfed those of other governments.

The U.S. Department of Defense’s annual report to Congress this year on China’s military estimated that the Chinese have fashioned at least 3,200 acres of new land in the Spratlys over the past couple of years. All the other claimants combined reclaimed 50 acres over the same period, according to the Pentagon’s estimates.

Adm. Harry Harris Jr., head of the U.S. Pacific Command, has dubbed the Chinese building spree a “Great Wall of Sand.” But these artificial islands aren’t likely to welcome a string of beach resorts in the near future; instead, the reclaimed reefs are being enhanced with military surveillance, communications and logistics infrastructure.

The buildup of Subi Reef is shown from Sept. 5, 2013, to May 1, 2016.
Photos by DigitalGlobe/ScapeWare3d/Getty Images, GIF by Andrew Katz for TIME

The Pentagon, which has increased U.S. military movements in the South China Sea, questioned the motivations behind Beijing’s island-building campaign.

“China’s government has stated these projects are mainly for improving the living and working conditions of those stationed on the outposts, safety of navigation, and research,” stated the report to Congress. “However, most analysts outside China believe that China is attempting to bolster its de facto control by improving its military and civilian infrastructure in the South China Sea.”

Environmentalists have decried the destruction of endangered coral reef caused by Chinese dredgers. And Beijing’s South China Sea construction boom may not be over yet. Earlier this year, Chinese military commentators went online with plans for expanding Scarborough Shoal, a contested reef less than 200 nautical miles west of Manila, the Philippine capital.

The Chinese seized the shoal in 2012, after a stand-off with the Philippines that culminated in a failed diplomatic foray by the Americans. (In 1995, China also occupied Mischief Reef, another feature off the Philippine coast.)

A satellite image of Subi Reef, captured by DigitalGlobe on May 1, 2016, shows the beginnings of a running track and basketball courts.
DigitalGlobe/ScapeWare3d/Getty Images

The recent Chinese drive to bring sports to the Spratlys isn’t without precedent. Although the Philippines and Vietnam have sparred with each other in the past over the ownership of certain Spratly islets, concern about China’s growing footprint has united the smaller claimants to South China Sea territory.

Last year, soldiers from the two Southeast Asian countries played a soccer match on a Philippine-controlled cay that Vietnam also claims. The year before, they played on a nearby spit of land occupied by Vietnam but claimed by the Philippines. It’s unlikely, however, that the new basketball and tennis courts on China’s reclaimed Fiery Cross and Mischief Reefs will be welcoming foreign soldiers anytime soon. 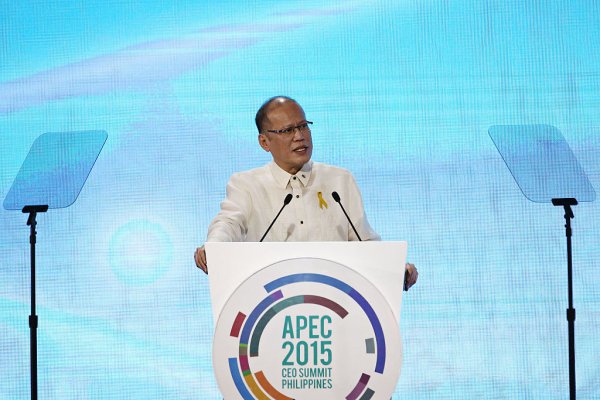