The first sex-segregated public restroom on record was set up at a Parisian ball; chamber pots for each sex were provided in separate rooms

Tremont House in Boston becomes the first American hotel with indoor plumbing, including water closets located on the ground floor; the Astor House hotel in New York City, built in 1836, featured toilets on each floor

Massachusetts passes the first known U.S. law declaring that “wherever male and female persons are employed in the same factory or workshop, a sufficient number of separate and distinct waterclosets, earthclosets or privies shall be provided for the use of each sex and should be plainly designated”

In Plessy v. Ferguson, the Supreme Court rules that “separate but equal” racial segregation is legal; it led to segregated facilities from public bathrooms to parks

The majority of the U.S. urban population has access to running water, a prerequisite for indoor plumbing

The Regional Council of Negro Leadership encourages a boycott of service stations with “whites only” facilities; the campaign, led in part by activist Medgar Evers, promoted the slogan “Don’t buy gas where you can’t use the restroom”

The Civil Rights Act of 1964 bans segregation in public facilities based on race and national origin, requiring an end to whites-only bathrooms

The Occupational Safety and Health Administration is established; it mandates that employees have adequate restrooms, and when facilities must be “separate for each sex”

The ratification period for the Equal Rights Amendment expires; Phyllis Schlafly and the Stop ERA campaign had used the specter of unisex toilets to help stoke opposition

The Restroom Equity Act in Califorina requires new sports and entertainment venues to have adequate restrooms for women, a move to fix perennially long lines

For the first time, the U.S. Senate provides a women’s restroom located close to the Senate floor

Ally McBeal’s fictional lawyers share a unisex bathroom, shocking some viewers (Calista Flockhart said at the time she wouldn’t be caught dead in a real one)

The city of Charlotte, N.C., passes an ordinance to allow transgender people to use the restroom that matches their gender identities 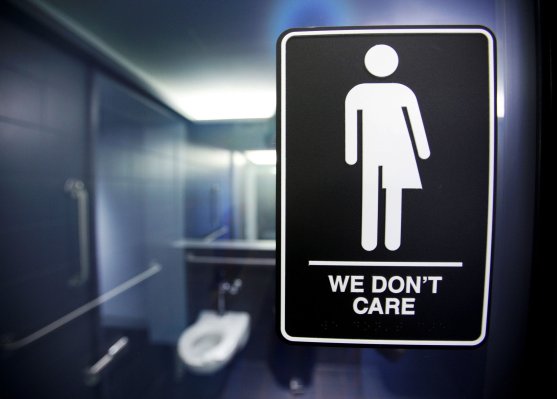 Battle of the Bathroom
Next Up: Editor's Pick