Here's What We Know So Far About EgyptAir Flight 804

EgyptAir Flight 804, which was traveling from Paris to Cairo, crashed early Thursday morning in the Mediterranean Sea, near the Greek island of Crete, officials said. The Airbus A320 plane disappeared from radar screens around 2:45 a.m., Cairo time. It had been scheduled to land at 3:15 a.m. Authorities are still trying to figure out what might have caused the crash.

Here’s what you should know about the flight’s disappearance:

1. There were 66 people on board, most of whom were Egyptian.
The people aboard the plane—56 passengers and 10 crew members—were internationally diverse. Thirty of the passengers were Egyptian, 15 were French, two were from Iraq, and two were from Canada. There was one passenger each from the U.K., Belgium, Kuwait, Saudi Arabia, Algeria, Chad, and Sudan, according to the Associated Press. There have been no signs of survivors. Egyptian security officials said they are running background checks to find out if any passengers had links to extremists, the AP reported. The airline has named the captain as Mohamed Said Shoukair, who had some 6,275 flying hours under his belt, including more than 2,000 hours flying the A320, the Guardian reports. It also named co-pilot Mohamed Mamdouh Ahmed Assem and head flight attendant Mirvat Zaharia Zaki Mohamed.

2. The plane swerved quickly and vanished at a high altitude.
The plane was traveling at a height of 37,000 feet the last time the pilot spoke to air traffic controllers, as it passed through Greek airspace, according to the AP. The pilot did not report a problem at that time. Soon after, the plane made a 90-degree left turn, then a complete 360-degree turn toward the right, dropping from 38,000 to 15,000 feet. It disappeared from radar at about 10,000 feet at 2:45 a.m. Egypt time, the AP reported, citing Greek Defense Minister Panos Kammenos. The director of Greece’s Civil Aviation Authority, Konstantinos Lintzerakos, said controllers tried to contact the pilot 10 miles before the plane exited the Greek Flight Information Range (FIR), but the pilot did not respond. The controllers continued to attempt to make contact with the plane until it disappeared from radar. The Egyptian military said it did not receive a distress call from the plane.

3. Wreckage from the plane has not yet been found.
The AP reported that the debris found in the Mediterranean Sea did not belong to an aircraft, citing Athanassios Binis, head of Greece’s Air Accident Investigation and Aviation Safety Board. EgyptAir Vice Chairman Ahmed Adel told CNN that earlier reports that the debris did belong to a plane were mistaken. Greek and Egyptian officials are still searching the area in ships and planes, and it is not yet clear whether pictures posted by a captain assisting in the search operation actually depict objects from the plane.

A relative of those aboard EgyptAir Flight 804 wipes her tears as she is comforted by unidentified people at Charles de Gaulle Airport outside of Paris, May 19, 2016.
Michel Euler—AP

4. Many are still questioning whether the crash was an act of terrorism.
Egypt and Russian officials have said the plane might have been brought down by terrorists. There were no documented red flags prior to the flight’s disappearance—the weather in the area was good, and Greek aviation officials said the pilot did not mention any issues when they last made contact. Civil Aviation Minister Sherif Fathi said the possibility that it was a terror attack “is higher than the possibility of having a technical failure,” the AP reported. Alexander Bortnikov, chief of Russia’s top domestic security agency, said: “In all likelihood it was a terror attack.” The circumstances echoed the explosion of a Russian commercial plane over the Sinai Peninsula in October 2015, which killed all 224 all on board. In the U.S., presumptive Republican presidential nominee Donald Trump said the crash “looks like yet another terrorist attack,” while Democratic frontrunner Hillary Clinton said the crash appeared to be “an act of terrorism.” No militant group has yet claimed responsibility for the crash.

— With reporting by Vivienne Walt / Paris 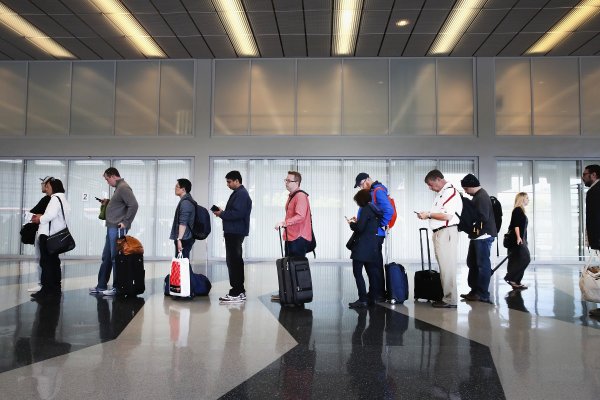 These Are the 8 Worst Airports for Flight Delays
Next Up: Editor's Pick